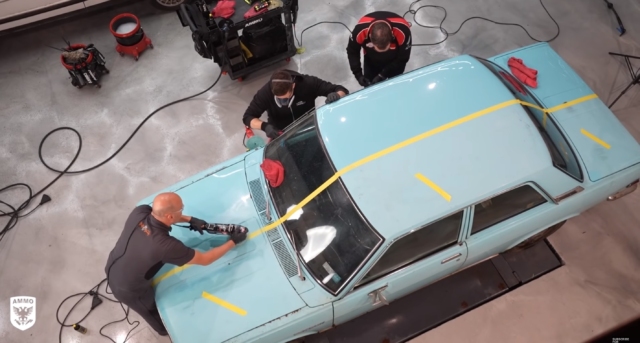 What does nearly half a century of grime look like? In New York, detailers unearthed a 1970 Datsun 510 that had been sitting for 44 years. It was purchased new in Long Island, driven for just seven years, then parked in 1977. Its current owner bought it in 2016 but had several other projects and only recently decided to clean it up. He took it to Ammo NYC, a maker of car care products, to see what they could do with the paint.

The results are impressive. Cars from this era had single stage paint, with no clearcoat to protect the color from the elements. Fortunately, the car does not appear to have been stored outdoors, but the aged paint has still deteriorated to the point of being chalky. The detailers do an incredible job bringing some shine back to the paint by scrubbing out all the grime and polishing out dried layers of paint.

They also clean out the animal droppings, wasp nests, and mold from the interior. The blue vinyl interior is amazingly in tact, though the mold did end up discoloring some of the surfaces. In the end a car that looked decrepit has been transformed into something presentable. It just goes to show what is possible when you put in some elbow grease.