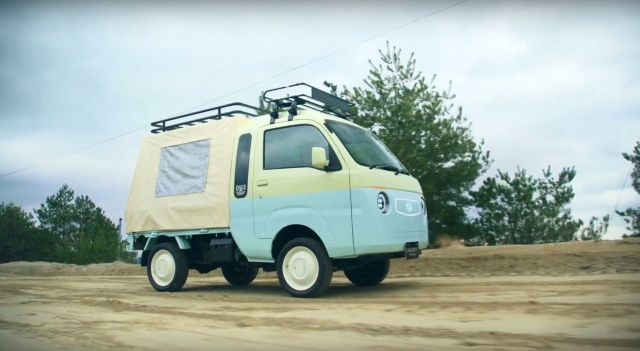 Daihatsu has officially taken the wraps off their 2021 Tokyo Auto Salon builds. We saw mock-ups of them last month, but now videos of the finished cars can be seen in motion, complete with jaunty music. This is probably the most we’ll get to see of them, too, because the Tokyo Auto Salon is canceled this year due to the coronavirus pandemic. Instead, everything will be virtual.

Our favorite, the Daihatsu Hijet Jumbo Camper Ver. transforms the newest of the company’s kei trucks into a little mobile safari-mobile. The front fascia has been redone to resemble a second-gen Hijet, with its round lights, eyebrow turn signals, and light-up grille. That was the first Hijet to employ the cab-over layout that carries over to this day.

Of course, now that we see the back of the truck, it becomes painfully obvious that the bed is too small for actual camping. So you can, I guess, just unfurl the canvas cover and sit forlornly in an open field. Perhaps it would have been better to put a rooftop tent on the safari rack. Even if the camper part of it doesn’t work that well, we hope this throwback cab will make it to an aftermarket conversion kit of some sort.

Last year was the 60th anniversary of the Hijet. The Camper had a small logo on the window, but the Hijet Jump Sporza Ver. uses it as its racing number. With a speedster roof-chop, Rays TE37s, and a reinforced bed, it actually looks pretty fun on the track. We have to admit, seeing it in action, it doesn’t appear as ridiculous as the original rendering looked. After all, the Hijet is mid-engined (it’s 660cc kei mill is under the driver’s seat) and rear-wheel-drive. It’s still pretty ridiculous, though, but at least Daihatsu is having some fun.

And then there’s the Taft Cross Field Ver., which takes all the overloading — oops, overlanding — gear like brush guards, light bars, and recover points, and applies them to a kei car that will never go over any surface rougher than some loose gravel.

Rounding out the lineup is the Daihatsu Copen Spider Ver., which looks like actual fun. Based on the Copen Cero, whose design was inspired by the original Copen, it’s reminiscent of a 60s speedster. With an FF layout it’s no Suzuki Cappuccino, but last we checked the Copen is still available with a 5-speed mated to its 660cc turbo three, so that should be good for a grin or two.

We hope these videos have given you your Daihatsu fill as we head into the weekend.