Chicago Auto Show: How Honda broke the rules with the NSX 30 years ago, and how Ford never forgot 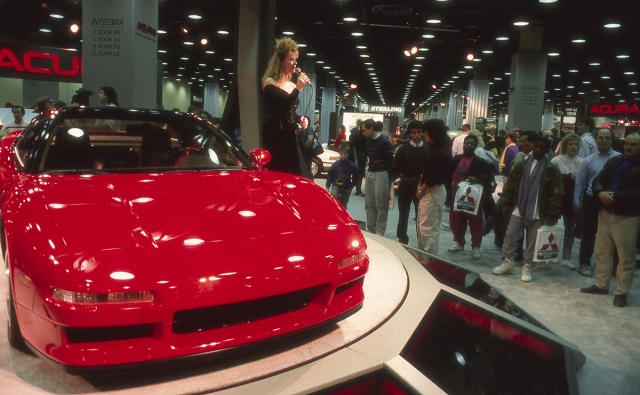 Thirty years ago, Honda went to the Chicago Auto Show to introduce a concept it called New Sports eXperimental. As we all know, the Acura NSX would become one of the best cars ever to emerge from Japan, or from humanity, really. But long before anyone even drove the thing, it was already causing a stir. 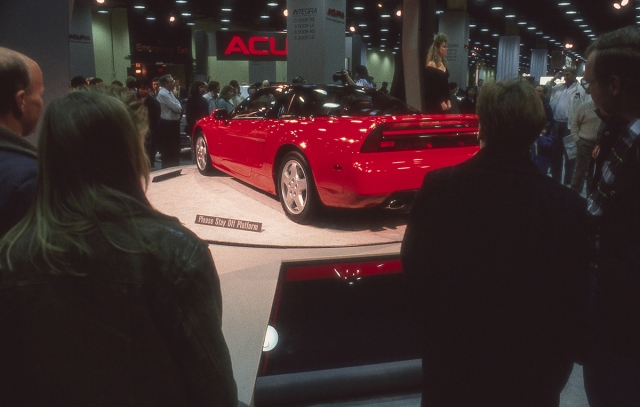 Auto shows are a funny thing. Prior to letting the public into a so-called Tier One event like Chicago, there’s two days of press conferences that are open only to journalists. There’s a lot of pressure during these big reveals, and the stakes can be tremendously high.

An executive could say something off-script, a car might break as it drives onto the stage (we’ve seen this happen twice) or, perhaps worst of all, there could be a sea of disapproving faces when the sheet’s finally whisked off the latest creation. And no matter what happens, the assembled media is there, ready to beam your every move to millions of eyes around the globe. 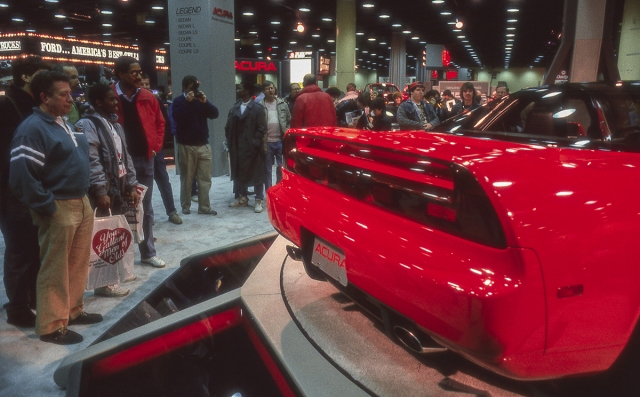 Press conferences typically last 20 minutes, but can take months, sometimes years, of preparation. Everything thing is rehearsed to a T, right down to the length of the pauses in the CEO’s speech. The primary goal, above all, is to “control the message.” As such, early leaks are very much frowned upon.

That makes the days before the press preview even stranger. It takes a lot of time and manpower to set up those massive booths, and during these prep days the convention centers are a free for all. There’s people wiring up the lighting, laying down the carpets, building the stages, unloading the cars, and even jamokes like us like us hanging around. 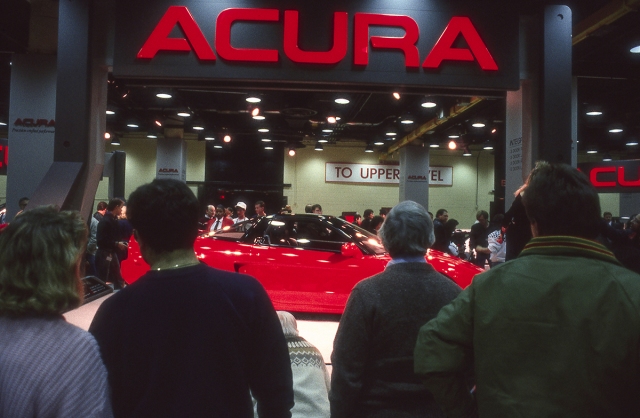 It’s a wonder there aren’t more leaks during this time, especially these days when everyone has a camera in their pocket. It would be so easy to sabotage the grand reveal by shooting a few pics or recording an exec rehearsing their presentation, fully mic’ed up to make sure the teleprompter and a/v system works.

In the auto show environment, however, all companies maintain a mutual respect for each other, even if they’re bitter rivals on the track or in the marketplace. They understand that, at the end of the day, they’re all there to make their pitches and sell some cars, so no one violates the code. Still, mistakes do happen. 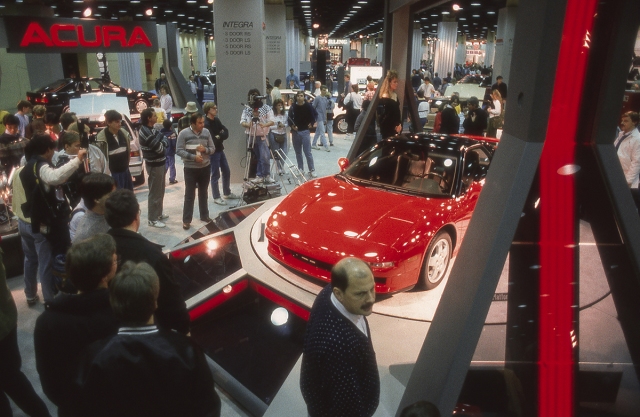 Such was the case 30 years ago, in February 1989, on the eve of the NS-X Concept’s big debut. That evening at the Drake Hotel, Honda was prepping their hugely important presentation about a supercar that would shock the world. At the same time Ford was holding their own live press conference, in the very next room.

Somehow, Honda president Tadashi Kume managed to slip behind the wheel of the concept and, for reasons known only to him, turned it on and stomped on the gas. Honda, in typical Japanese understatement, described it as “a sound that could be heard in an adjacent room.” Autoweek‘s Blake Z. Rong had a much more entertaining take:

The engine sparked to life, then it roared as Kume proceeded to rev to redline — right in the middle of the Ford conference. Everyone was shocked. “Mr. Kume, stop it!” yelled Kurt Antonius, Honda’s spokesman emeritus, gesticulating wildly. “They’re gonna hear this!” 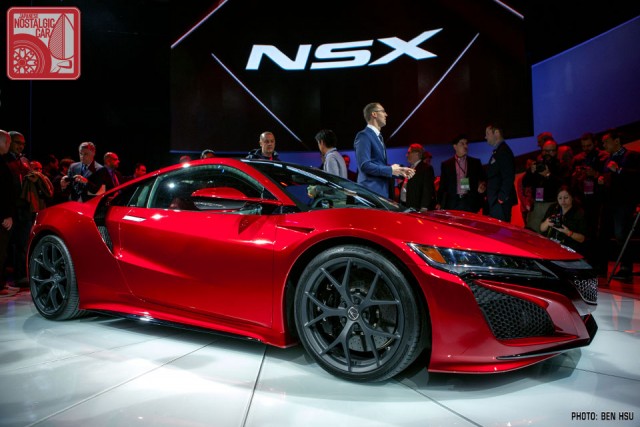 Fast forward to 2016, when the long-awaited second-generation NSX debuted at the Detroit Auto Show. Ford had just debuted its stunning new GT supercar at Joe Louis Arena, just down the street from Cobo Hall, where the main show is held. A “remote” is fairly typical when automakers are expecting a particularly large crowd or need some special staging.

After the reveal the car is moved to its proper booth, where it gets placed on a rotating pedestal for the public days. This is all very common, and on press days concepts will often creep slowly through the halls. Presumably, journalists, unlike the public, are professionals and can be trusted to be around a moving vehicle.

As it happens, the GT’s path to the Ford display took it right past the Acura stand. And as you guessed, they mashed the throttle, letting out a piercing wail smack dab in the middle of the new NSX’s press conference. 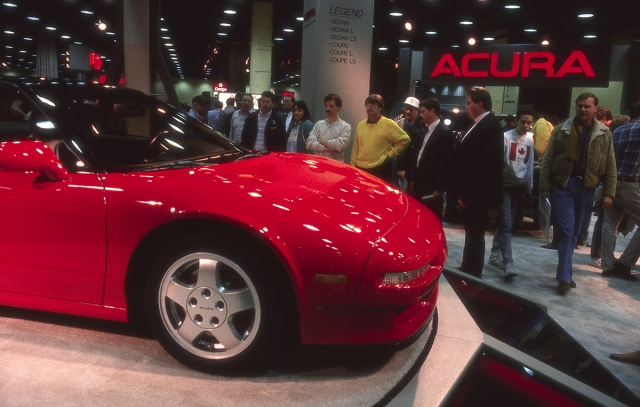 Now, we can’t read the minds of the fine folks at Ford, but you can imagine what this looked like— an act of revenge 27 years in the making. Was it payback for Chicago? Did the driver’s foot slip as he inched the GT over the plush rugs of Cobo? Was anyone from Ford or Acura at both the Drake in 1989 and in Detroit in 2016? We’ll never know, but the story is too damn good to be written off as a coincidence. 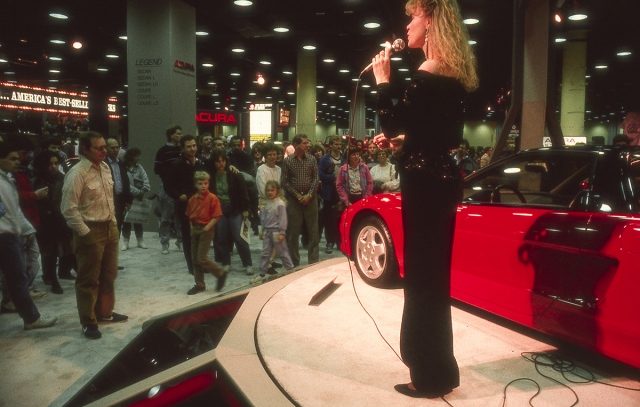 The funny thing was, Kume never gave a crap about upstaging Ford. He wasn’t trying to disrupt their conference at all. According to Honda, immediately after stabbing the pedal, “Kume turned to the NSX engineering team and asked why the NS-X Concept didn’t use the new VTEC technology that had been recently developed at R&D. When told that it was only planned for a 4-cylinder engine application, Kume pushed the team for a VTEC V6 design.”

Kume had simply been doing what Honda at that time did best, engineering. It’s almost unthinkable that a CEO would express concern about such a thing today, when cost cutting and sales targets take precedence Uber alles. Corporate strategies are too measured, with every tiptoe calculated to increase market share. Kume wasn’t trying to show up another company or outdo them. He was just trying to make the NSX the best damn car it could be, and as a result it changed the automotive world. 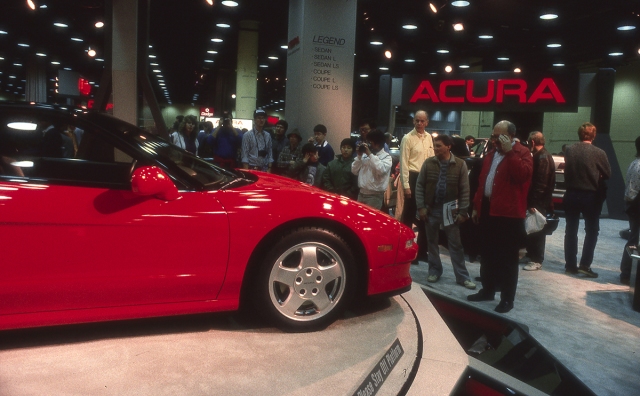 5 Responses to Chicago Auto Show: How Honda broke the rules with the NSX 30 years ago, and how Ford never forgot