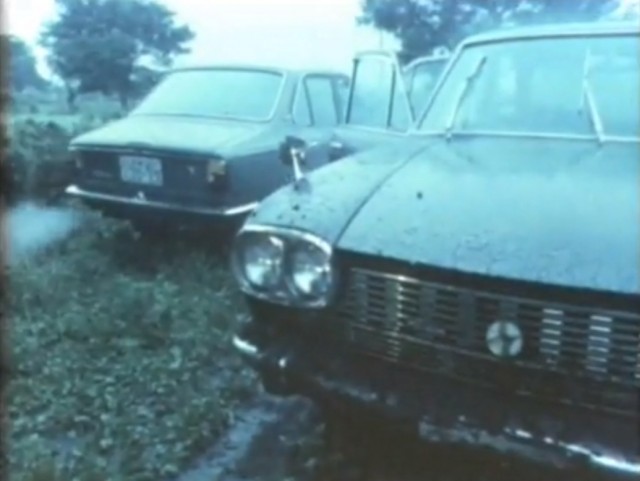 The biggest robbery in Japanese history took place on December 10, 1968. On that day, duralumin cases with the year-end bonuses for an entire Tokyo Shibaura Electric (now Toshiba) factory was to be delivered by the Kokobunji branch of the bank known today as Mitsubishi UFJ Shintaku Gingko. Normally, such cargo would be escorted by two guards in a bank-owned Nissan Cedric, but this time security was upped to four men.

That’s because four days earlier a bomb threat had been called in to the bank, insinuating that the manager’s house would be blown up if 300 million yen (about $800,000 in 1968) was not delivered to a certain location by 5:00 pm the next day. 50 police were dispatched to the location at the precise time, no delivery was made, and the bank manager’s house remained un-exploded.

But the bank was still on high alert the day of the delivery. En route, a uniformed motorcycle cop stopped the transport car. He informed the driver that the bank manager’s house had indeed been blown up and that the Cedric itself was rigged to explode as well. The couriers got out of the car, and as the officer crawled underneath to examine it smoke began pouring from its undercarriage.

The officer ordered everyone to take cover, and in the commotion/smokescreen he got behind the wheel and drove off. That’s when the couriers noticed there was something fishy about the policeman’s motorcycle. It was a Yamaha Sports 350R1 and not the standard-issue police bike, a white Honda Dream. Moreover, Yamaha never offered that model in white, and upon closer examination it was discovered that the bike was in fact blue and and had been hastily repainted. The “smoke” from the Cedric had been planted by the cop/thief himself.

Police were scrambled to hunt down the Cedric, but it was nowhere to be found. Eventually it turned up, abandoned, in a vacant lot. The robber(s) had switched to an unassuming dark blue KE10 Toyota Corolla and gotten away.

That Corolla was found four months later in another vacant lot, with an empty duralumin cash case inside. It’s believed that the thief had switched to yet another Corolla, spotted later in a JSDF aerial photo of the lot taken the day after the robbery.

Actually, three stolen vehicles were found in the vicinity of that lot — a Bluebird, Prince Skyline 1500, and Prince Skyline 2000GT. A stolen Honda Dream was also recovered, leading police to speculate that the thief had originally planned to modify it for the police bike ruse, but had abandoned it due to mechanical difficulties.

The crime spawned a media circus and became a sensation amongst the populace. This resulted in an overabundance of suspects and “evidence,” causing at least one accused man so much grief that he took his own life. One theory even has the bosozoku behind the heist (perhaps due to the presence of those Skylines).

By 1975 the statute of limitations for robbery had run out, and after ¥900 million spent on investigations the case was forgotten. However, that didn’t stop Japanese citizens enthralled with the heist and conspiracy theorists from speculation. Over the years many versions of the story have been have put on film, not all of them accurate. Many get wrong the cars (S50 Toyota Crown in place of the Cedric), their colors (copper instead of dark blue), or the year (KE30), but they’re always a good showcase for nostalgic cars. The sheer volume of reenactments speaks to Japan’s fascination with the case, though to this day it remains unsolved.