EVENTS: The California Accord Meet proves family sedans can be cool again 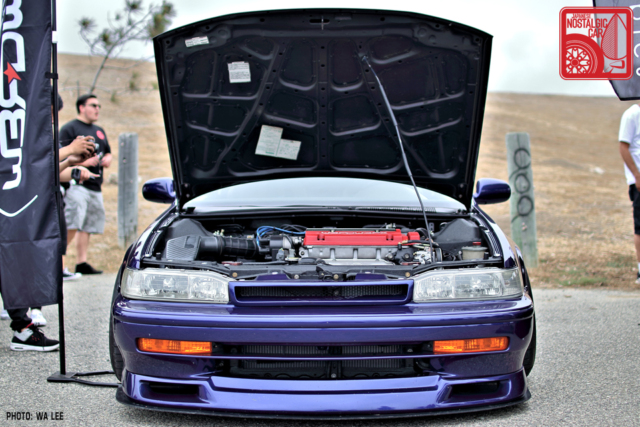 The Honda Accord: Once a practical family car, now a beloved classic that has spawned an entire show dedicated to a single model. The California Accord Meet in SoCal is the largest Honda Accord gathering in the US, and  draws enthusiasts from around the country. We followed two friends who made the pilgrimage from Minnesota in their own cars to attend the Accord mecca. 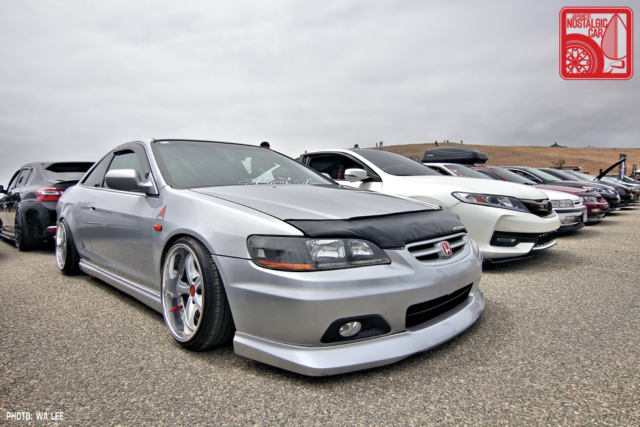 During the golden years of the Tuner Era, Honda dominated the scene. With the 90s cars entering JNC-dom there’s an interesting melding of two subcultures — the tuners and the chrome-bumpered old guard. We’ve been wanting to juxtapose these two styles for a while, so what better occasion than a show that blends both of them together? Our friends Wa Lee and Thai Xiong trekked down in their 90’s Accords to get a glimpse. 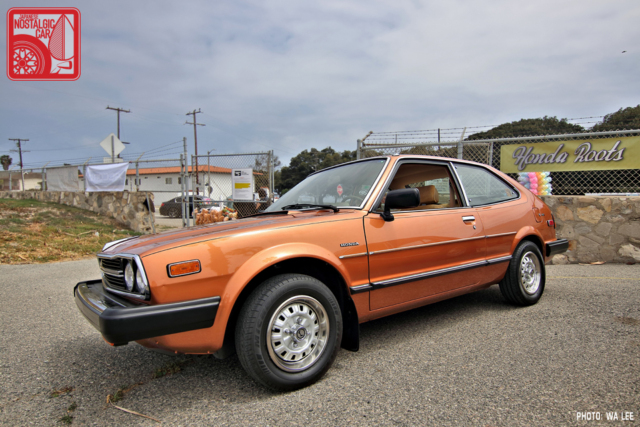 Cars like Chris Hoffman’s 1980 Longleet Gold Accord Accord hatchback sat across an aisle from engine-swapped and slammed tuners from the 90s and 2000s. It sometimes feels like the general population of fans don’t really care about the roots of their favorite vehicles. This isn’t the case at all with the Honda community though, it seems like everyone with an Accord has some sort of interest in the pre-Tuner Era cars. I’ve had more interactions with kids driving stanced Hondas showing interest in classic N600s and CVCCs than I’ve had with their counterpart fans of rival marques. 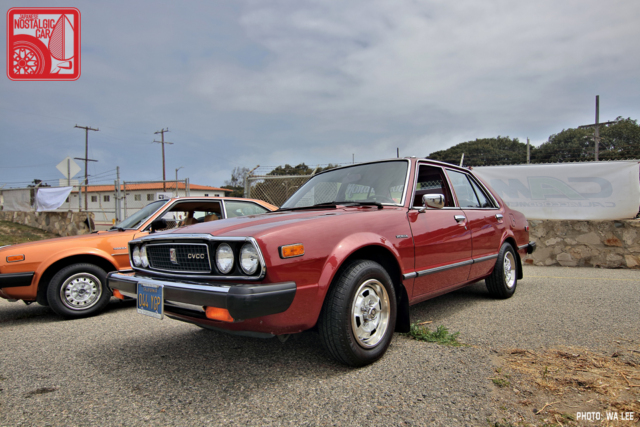 CAM was the place to be for people like that, while chrome bumpers could only be found on the original Accord, they were accepted with open arms, even if they didn’t have rare wheels or coilovers. Chris Green’s 1979 might be one of the best preserved CVCC sedans in the country. Everything down to the tires looks era-correct and it even has an original California blue plate. 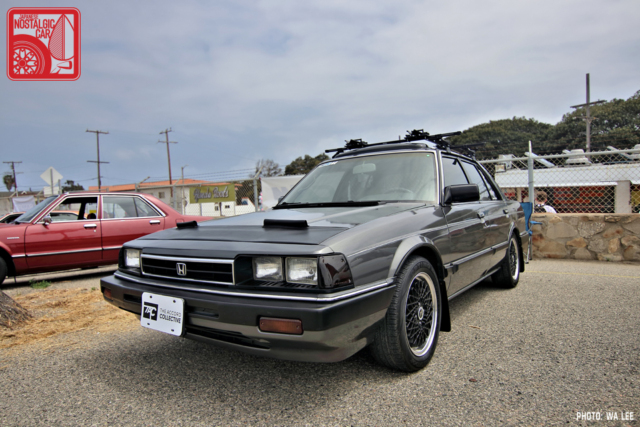 The second-generation Honda Accord feels like the marque’s sophomore album. It was good, but it seems to have experienced the same curse that befell the Datsun 280ZX, stuck between the original that draws all the praise and its radical successor. Regardless, I love seeing the understated design of the second-generation Accord in the wild. This particular example has a blend of modern and classic touches, the blacked out corner lights being he most controversial but the rest of the car looking quite excellent. 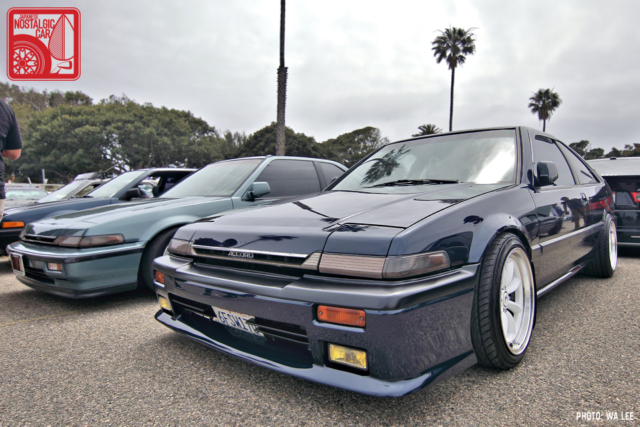 The third-generation Accord is well-known as a favorite here at Japanese Nostalgic Car (full disclosure: I own two). It was the car that bridged the gap between classic and the tuner era Accords. Its chassis code, CA, is quite fitting, as California has one of the largest tuning communities in the world for these cars. Carlos Ochoa’s hatchback and Juan Valdivia’s coupe are two outstanding examples of CA Accords, further blurring the lines of traditional modification and modern tuner style. 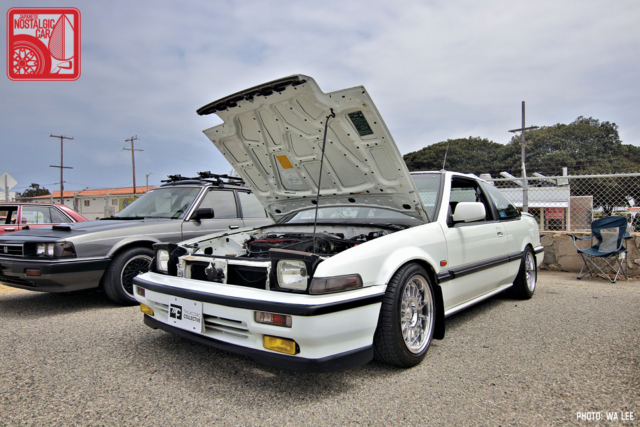 Naturally period-correct, or at least era-inspired, mods tend to garner extensive attention. Modifications of the era tended to compliment the original styling of the car, and while sometimes reaching for a modern touch can help, the goal is to compliment, not make it something it isn’t. As we reach the 90s Accords, we begin see that modifications that have been popular in the Tuner Era follow the same trend. 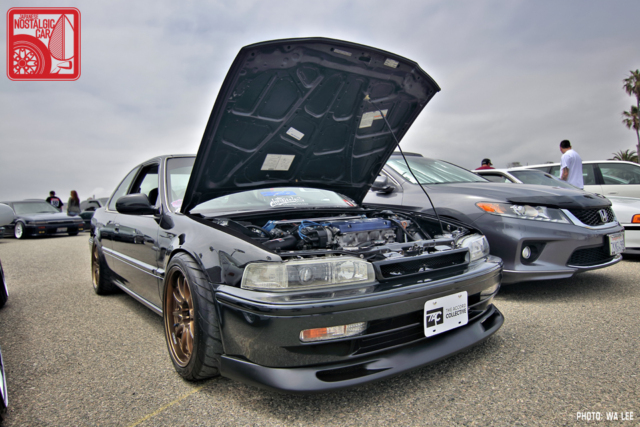 Staples of the Tuner Era, like the CB and CD chassis, are migrating into classic status, and it’s creating a sea change in the community of owners of these cars. Once disposable daily drivers, today a CB Accord is just a collectible a JNC as a Toyota Corona or Datsun 610. This black kouki CB7 was a perfect example of a car that would have previously been driven into the ground. Today it is sorted out with an H22 swap, JDM one-piece headlights, and a very meaty wheel and tire setup. Notice the lack of tire damage from the overlap with the fender, hinting at a quality suspension setup. 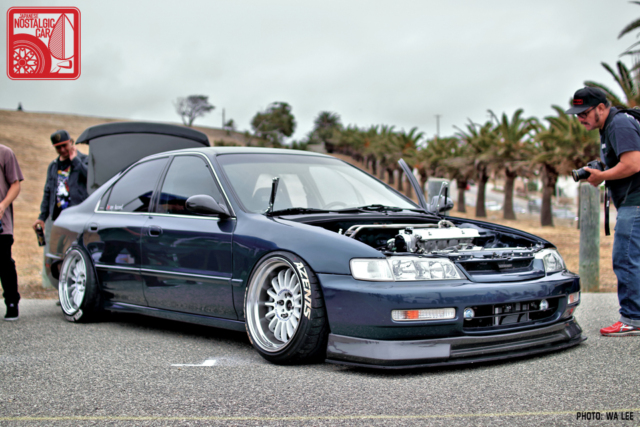 Whether conscious or not, 90s cars are taking a page from traditionally kyusha modification styles. The camber and lipped wheels seen on cars like this CD Accord are culturally linked to the lowered and re-barrled rear-wheel-drive Toyota and Nissan hardtops of the carburation age. The spirit of weekend wrenchers that built Datsun 510 street racers can be found in these tuners. 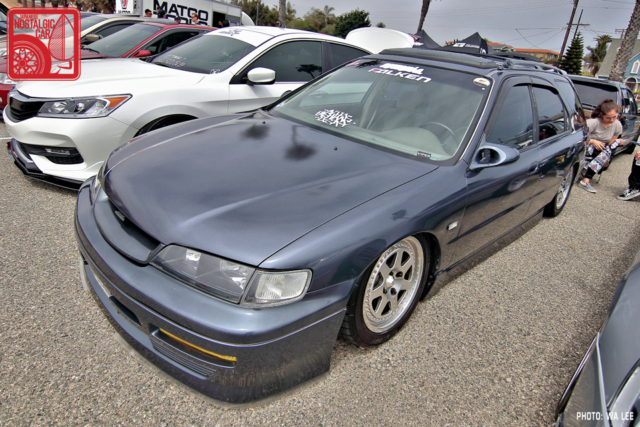 While preservationists would lose their minds at the thought of aftermarket wheels or altered suspension, the Honda crowd embraces the wide selection of parts made available to these cars in period. Like a set of triple sidedrafts on an L28 or a set of Hayashis on a TE27, the Mugen body kit and M7 wheels on an Accord Wagon show an appreciation for the culture and legacy of these cars. 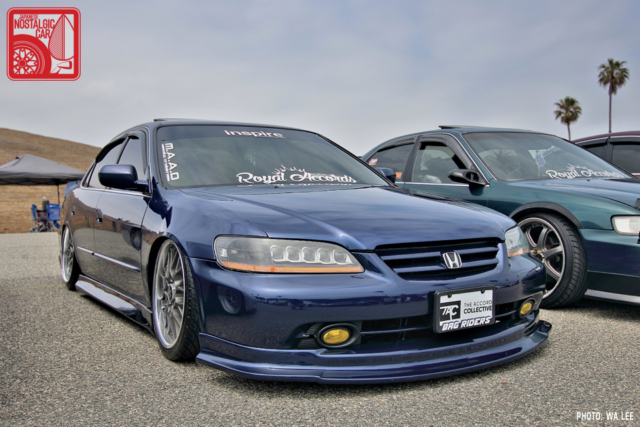 An Accord with retrofitted MDX Jewel Eye headlights and aggressive lip kit echoes the swapping of a Kenmeri’s quad round lights for dual Cedric sealed beams and a deppa chinspo. 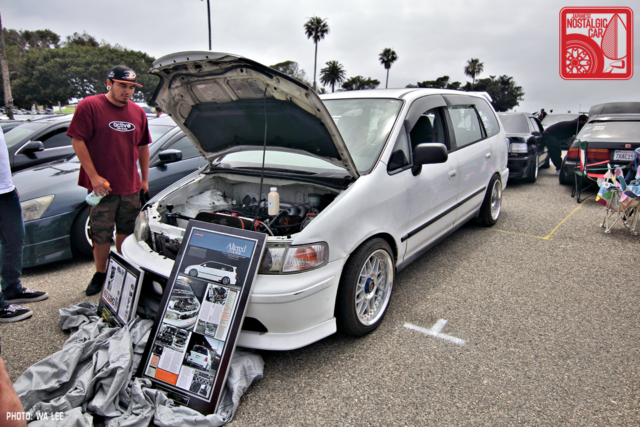 This RA1 Odyssey, which is directly related to the CG Accord shown above, features a number of period correct modifications. Racing Hart Type C were the wheel to have at the turn of the century, and the reverse head H22A was inspired by the Accord touring cars of the late 90s. The latter is no small feat to achieve, and for a Hondahead, this is the equivalent of Takumi Fujiwara’s Formula Atlantic 4AG. 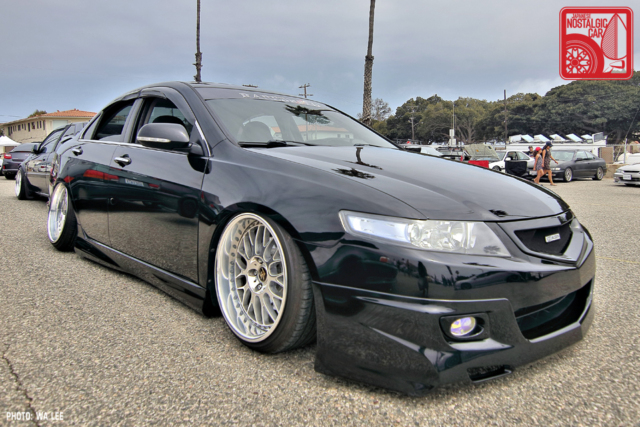 Like a ’49 Ford or ’57 Chevy, the Honda Accord was once ubiquitous family car that has gained a second life thanks to devoted enthusiasts and customizers. Its original popularity (twice ranking as the best-selling car in America in 1989 and 1991) ensured there would be plenty of parts support for years to come, and Honda’s baked-in performance-oriented engineering spawned a wide range of aftermarket support. The golden tuner years of Japanese cars in America are on the horizon of entering classic status, and as someone who grew up in the back seat of his mom’s Tiburon clutching a Super Street and idolizing the Bomex-kitted EG hatch down the street from his apartment, I know firsthand how exciting this is to see.

permalink.
This post is filed under: events and
tagged: accord, Accord CA, Accord CB, Accord CD, Accord CG, California Accord Meet, cb7, honda, Odyssey, RA1.

11 Responses to EVENTS: The California Accord Meet proves family sedans can be cool again