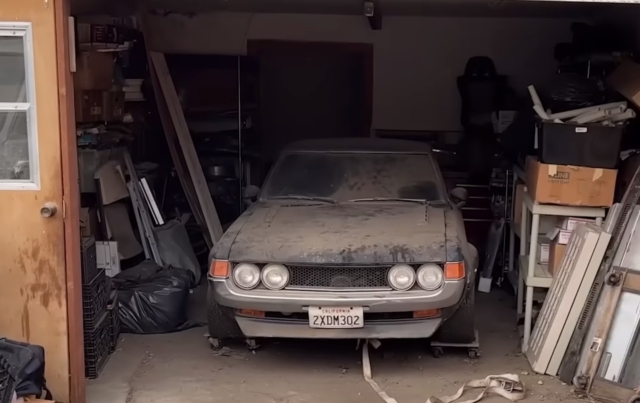 For those who grew up in the Tuner Era, Stephan Papadakis needs no introduction. A pioneer in the import drag racing scene, his tube-frame Hondas broke records and were a regular presence in tuning magazines of the day. With his latest project, Papadakis is going old school, way older than the Civics he’s known for. He scored a barn find 1972 Toyota Celica with loads of period-correct goodies that had been sitting for 20 years.

Since the late 2000s Papadakis has been managing a championship Formula D drift team, leaving Honda behind and finding a corporate partner in Toyota. Hang around a bunch of RWD Toyotas for long enough and eventually the classic bug will bite. He began searching for a Celica and found one with the help of former TORC president Joji Luz.

Joji led him to a true barn find, a Celica that had been modified in period but then parked for 20 years. Coming across a barn find Celica is rare enough. Imagine unearthing one that already has an 18RG with Mikuni 44s, TRD pistons, and HKS cams installed.

Back at his shop, Papadakis pores over the details of his Celica like a not-annoying Doug Demuro. It’s fun to follow his journey as he discovers RS-Watanabe wheels, smiley bumpers, and points distributors. What’s great about the car is that it’s not a factory original barn find. It’s been modified already and has enough scratches that Papadakis doesn’t have to feel guilty about further modding it. With his encyclopedic know-how and state-of-the-art workshop, it’ll be interesting to see where this project goes next.

permalink.
This post is filed under: Video and
tagged: a20, celica, Stephan Papadakis, toyota.