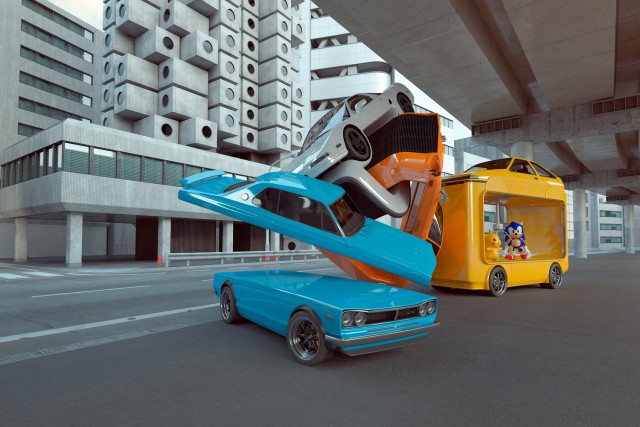 Chris Labrooy is a British artist who creates brightly colored 3D models that look so real you can almost touch them — except that they exist only in pixels. One of his favorite subjects is cars, but stretched out into bizarre, logic-defying shapes. His earlier work consisted of strange, interlocking American land yachts and pickups. Now he’s turning his attention to Japanese classics.

Labrooy first came to our attention with his works Auto Aerobics and Tales of Auto Elasticity, which featured twisted ’68 Pontiac Catalinas and Ford pickups, respectively. The works began as simple ideas about location. “Walking through Brooklyn on a winters evening is a truly memorable experience which motivated me to build a digital 3D model that captured the various details and textures of this location” says Labrooy of Auto Aerobics. 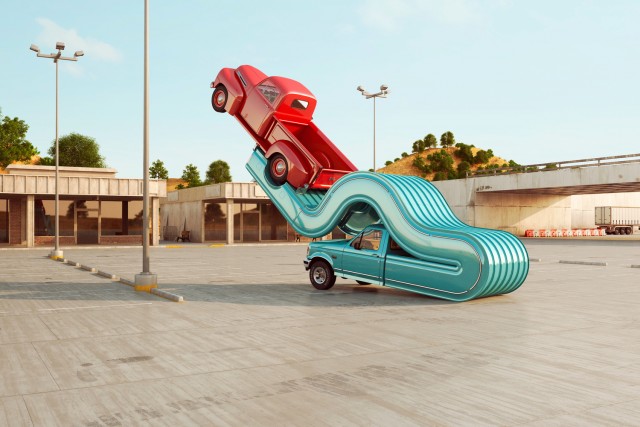 “The Pontiac automobile was initially destined to be a prop parked on the sidewalk; however, I later decided to make it a parallel subject of the series and started abstracting the cars forms by hollowing out the vehicles core, stretching the proportions and experimenting with multiples which over time began to look extraordinary.”

Tales of Auto Elasticity were inspired by his road trips through southern California. 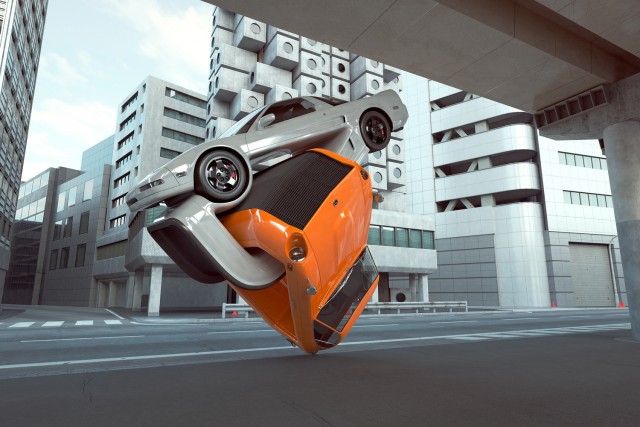 Labrooy describes his latest work, Tokyo, as “A continuation of my auto elastic explorations. This project draws for Japan’s rich car culture.” If going by his previous pieces, in which Labrooy seems to select cars to fit the environment, Tokyo should have featured mundane vehicles like a Toyota Crown Comfort or one of numerous kei cars. Instead, he employs some of the most iconic Japanese cars of all time — an S30 Fairlady Z, Honda NSX, Toyota AE86, and hakosuka Skyline.

Perhaps that’s because the background contains an icon as well. The Nakagin Capsule Tower is a Tokyo apartment built in 1972 by Kisho Kurokawa. In architecture circles, it ranks as one of Japan’s most famous buildings and is, according to Wikipedia, “a rare remaining example of Japanese Metabolism, an architectural movement emblematic of Japan’s postwar cultural resurgence.” True to its name, each block is a detachable, prefabricated apartment unit that plugs into a core structure. Sadly, many of its units are in disrepair today and the tower itself exists under constant threat of demolition.

Labrooy’s art is certainly visually compelling, but speaking as an observer of Japanese car culture in the west, what is most impressive is how pervasively nostalgics have been embedded into spaces beyond their original borders.

permalink.
This post is filed under: Art Corner and
tagged: Chris Labrooy.

6 Responses to ART CORNER: Reality-bending JNCs for your viewing pleasure