Arna: When Alfa Romeo made Nissans

By far one of the more bizarre automotive dalliances was the very short lived alliance between Alfa Romeo and Nissan in the early 80s. Alfa Romeo needed a small and cheap new model to accompany it’s new Alfa33 compact, and Nissan needed a way to break into the European market.

Back in the 1980s, JDM manufacturers were subject to import quotas in most Europoean countries, which limited the number of cars they could sell in any given market. Today, Japanese manufacturers all have plants in Europe anyway, so the import quotas are no longer an issue. But back in the early 80s, Nissan saw a way around the quotas by tying up with Alfa Romeo. And Alfa Romeo would begin to manufacture Nissan Pulsars in its old Alfasud factory near Naples, and that plan was that Nissan would have golden opportunity to expand its European market share, free of the constraints of import quotas.

Well…..it didn’t quite work out that way.

The Nissan vehicle of choice was the subcompact N12 Pulsar. The regular Japanese model would be a very conventional FWD hatchback, powered by a 1.5L SOHC four. 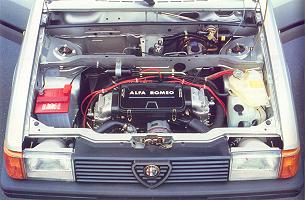 The Italian version made by Alfa Romeo would have the Alfa flat four engine, in capacities ranging from a 63ps 1.2L to a 95ps 1.5L. In terms of engineering changes, the Alfa team couldn’t help themselves, and so the front suspension, the firewall and much of the front of the floorpan was changed from the original Nissan design (you can see in the engine bay pic above that there’s a second bulkhead between the shock towers, which the Nissan didn’t originally have. 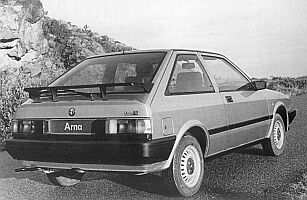 Overall, very little of the original Nissan Pulsar running gear remained, and the ARNA would mostly resemble an Alfasud underneath, with pretty much only the rear drum brakes staying Nissan. Inside, the Pulsar dashboard and door cards would be used, but with a few Alfa touches such as the sporty looking dished steering wheel. 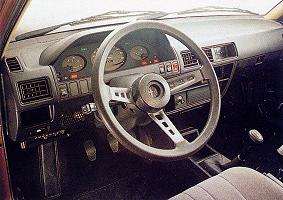 So it really wasn’t a huge surprise to discover that the ARNA drove a lot like an Alfasud rather than a Pulsar. This was no bad thing, since at the time, the discontinued Alfasud was still fondly remembered as a very good-handling sporty hatchback. And so road reports of the time would say that the ARNA drove with the typical low geared, eager bubbly sportiness of a small-engined Alfa Romeo, coupled with the responsive Italianate handling you would expect. The downside was that while it drove well, the ARNA wasn’t a very happy combination in the end, the plain and conventional Nissan interior and body mixing uneasily with the Alfa personality. 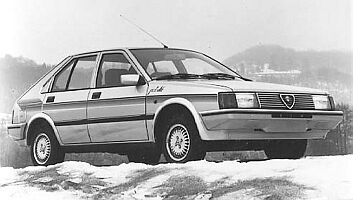 Buyers thought so too. The Nissan version would be marketed as the Nissan Cherry Europe (except for minor items like badging and grilles it was the same as the ARNA) and the odd thing was that it would be sold alongside normal, Japan-built Pulsars. But the JDM Pulsars outsold the Italian-built one by something like 5 to 1. Nissan dealers would complain that the Cherry Europes had far poorer build quality than typical Nissan customers expected and so Cherry Europes would need a lot of remedial work by the dealers before they could be sold. But Alfa Romeo would maintain that the quality of its ARNA/Cherries were pretty good (by Alfa standards they probably were).

And with the JDM fascination of all things European, Nissan could not resist making the most of the Italian connection and so a version of the JDM car was badged Nissan Pulsar Milano, and JDM Pulsar commercials of the day were also pretty heavy on the Italian connection, too. The Milano was just a marketing thing however and didn’t feature any of the Alfa Romeo hardware in it. 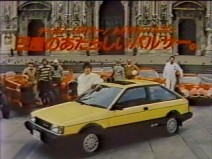 The Alfa-Nissan partnership was supposed to last 15yrs and Nissan and Alfa was supposed to work together to release two or three jointly-engineered cars during that time. But there were cultural differences to bridge, not only between Nissan and Alfa Romeo staff themselves, but also between Nissan and Alfa Romeo dealerships and finally their respective customers. Too much of a gulf to bridge perhaps, and the partnership ended after just producing one car, the ARNA, and the two companies went their separate ways.

The great irony is of course, that 25 years later, Nissan again has a European connection: it’s owned by Renault.

7 Responses to Arna: When Alfa Romeo made Nissans