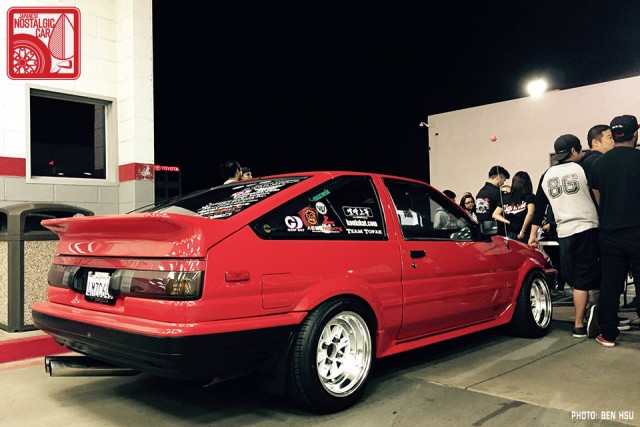 What started as an small gathering of Corolla drivers in a SoCal Kohl’s parking lot has grown into an annual event attracting hundreds of 86ers. AE86 Nights marked its 8th anniversary over the weekend, and suddenly a car that is almost extinct in the wild appeared by the lot-full in honor of the world’s most famous tofu delivery vehicle. 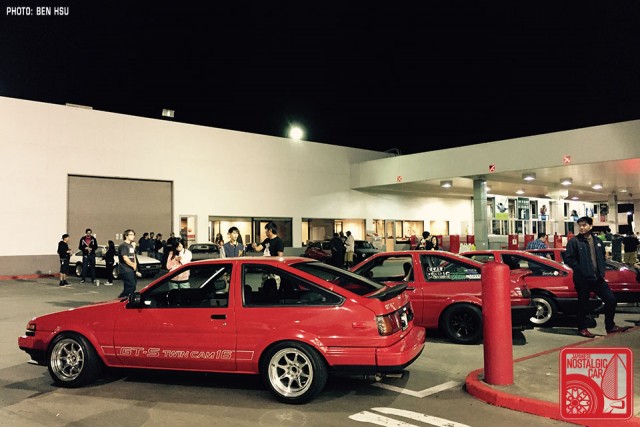 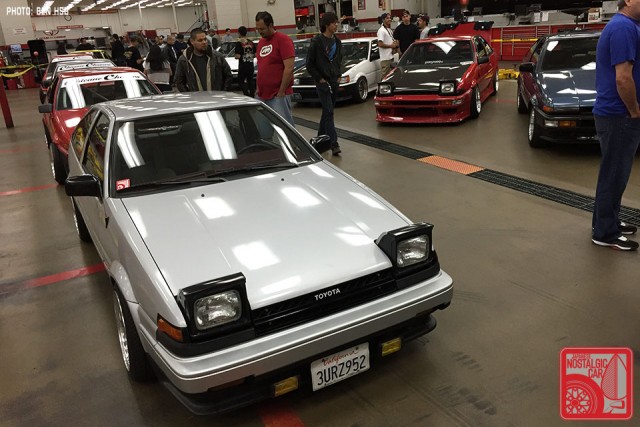 From touge runners to stance kids, sparkling show cars to drift rats with dented and mismatched body panels, AE86s of all stripes were represented. All of them had convoyed from all corners of SoCal and converged on the after-hours parking lot of Longo Toyota in El Monte, California. 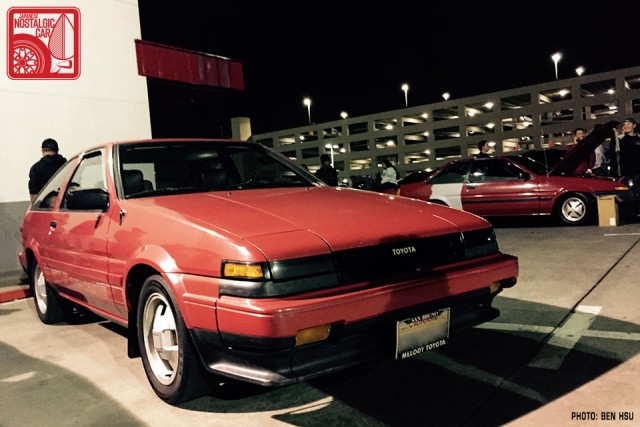 On a recent episode of After/Drive, I made the claim that there were fewer stock AE86s left than Ferrari Enzos, of which 399 were made. Here’s one of them, an unmodified 1985 hatchback complete with original “pizza cutter” 4-spoke wheels, mudflaps and factory spoiler. 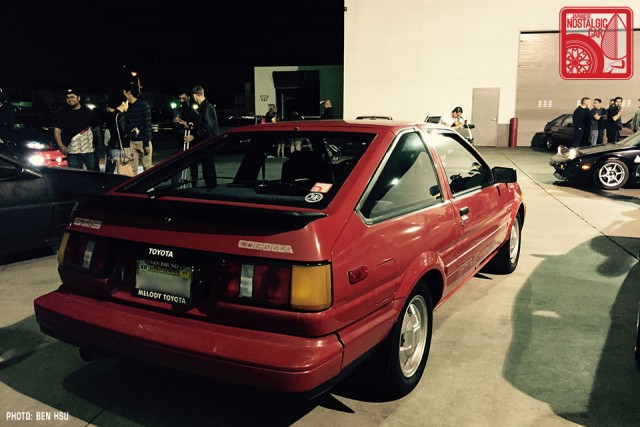 The owner, a young man named Dustin, bought it from the original owner. Thieves actually stole it from Dustin’s house but luckily it was recovered, abandoned down the street, 26 hours later with a handful of parts missing. It would have been a travesty to strip this beauty. Dustin says he has a JDM front and rear bumper arriving soon, but we implore him not to go that route. Hell, even Levin conversions present at the event outnumbered the sole modified GT-S. 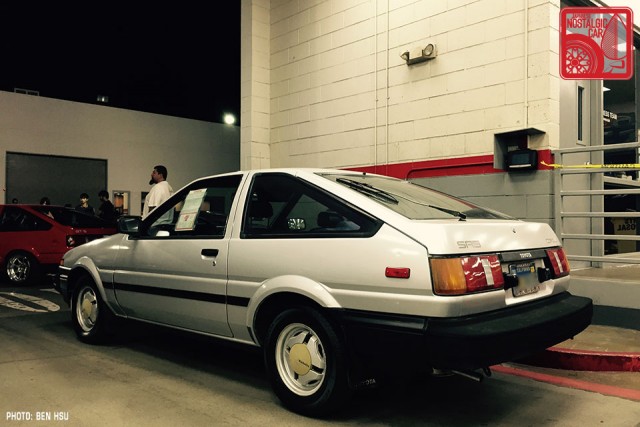 Another gem comes in the unlikely form of a 1985 SR5 hatch, so cherry that it still carries the window sticker. Though the SR5 lacks the GT-S’s rear disc brakes, fuel-injected engine and a host of other minor differences, the originality of this particular example sent our hearts aflutter. 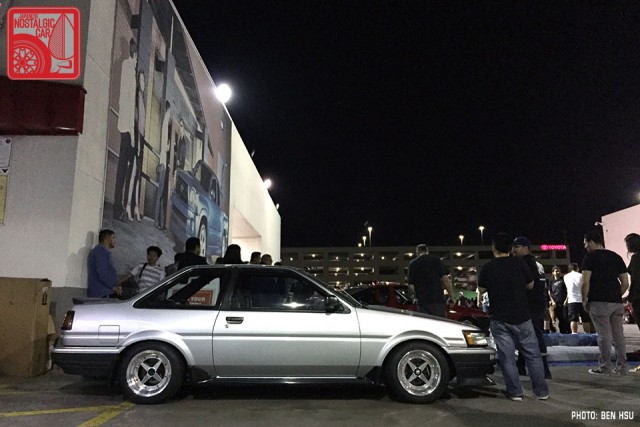 Don’t get me wrong. I’m not against a modded AE86, especially when it’s done cleanly. This Levin-nosed coupe on Work Equip 01s. 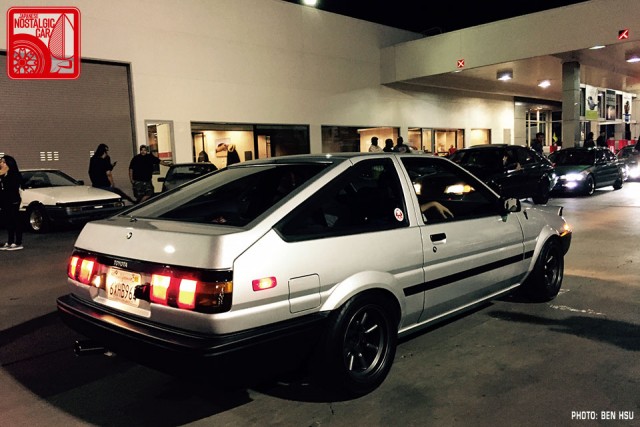 In fact, I loved this sleek hatch, classic in its sleek, spoiler-less profile and black RS-Watanabes. Judging from the trim, it probably started life as an SR5 but has had a 4AG swap performed along with its impeccable cosmetic freshening. If I wanted to rock a solid modified AE86 driver, this is exactly the route I’d go. 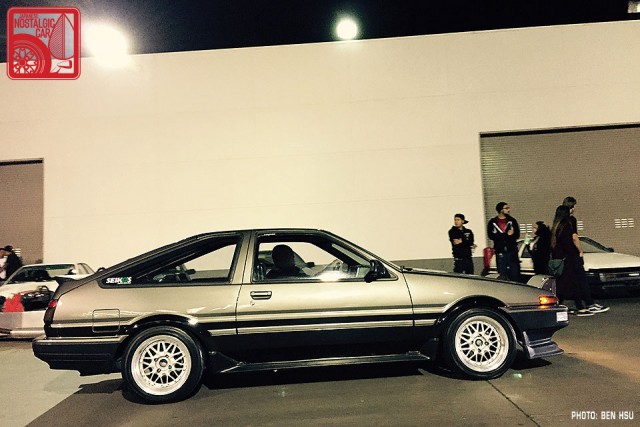 Silver Gray and Black was offered only on the GT-S for its debut year, 1985. The rare combo was also the only two-tone that Toyota offered in the US that year, which is kind of funny when you step back and think about it, considering the “panda” paint scheme is so closely associated with the car. 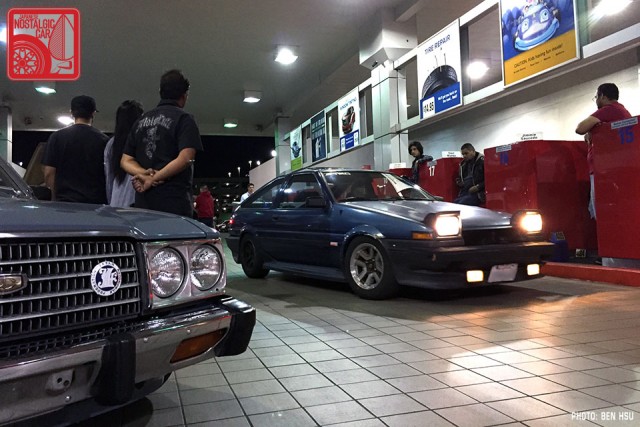 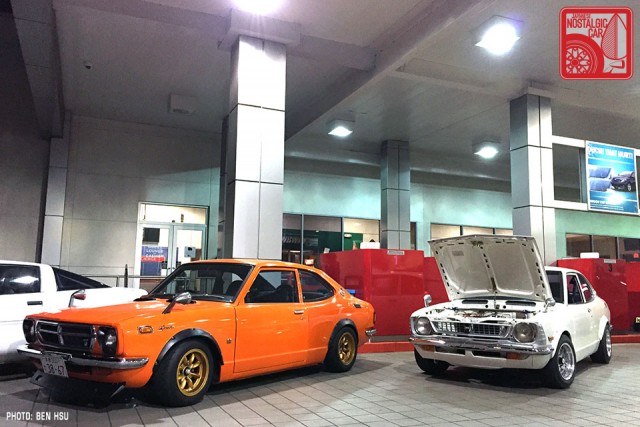 As great as seeing all these 86es might be, AE86 Nights attracts more than just AE86s. All cars from the extended Toyota family are welcome, from Coronas to TE27s, Cressidas to pre-turbo Supras. 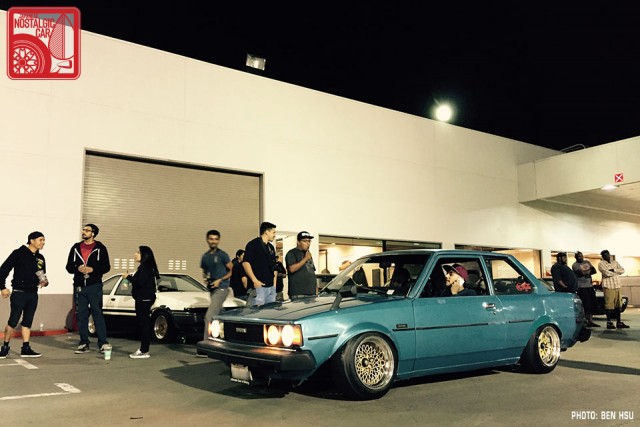 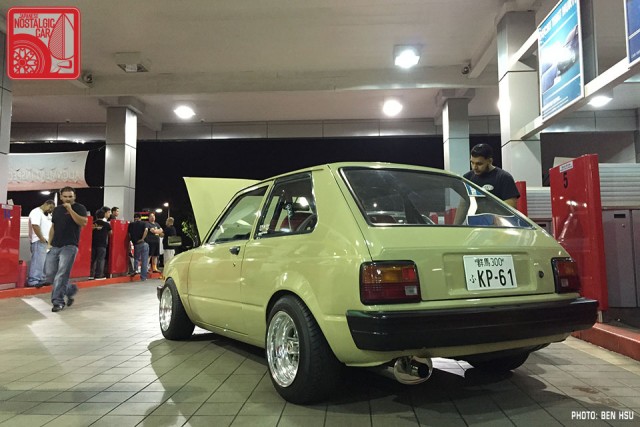 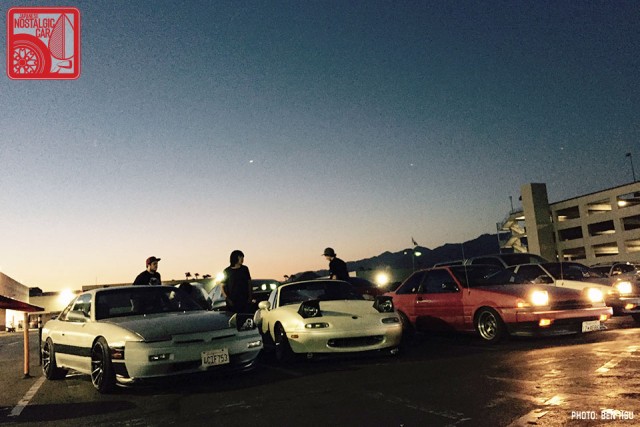 Further out back, even the extended extended family comes to pay its respects. 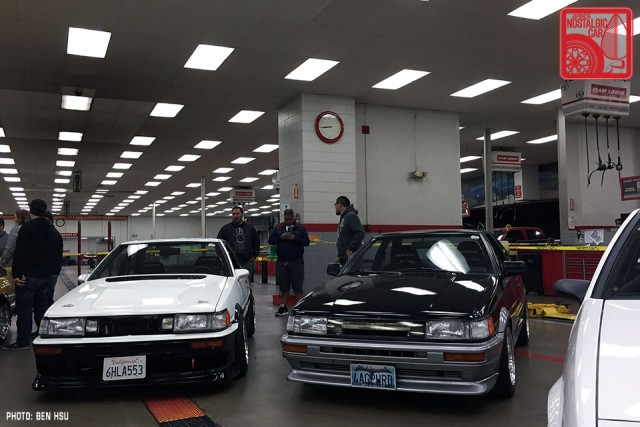 The sheer amount of vehicular diversity is pretty astounding, considering it’s all in the name of a single generation of a single model that barely sold in the US for three (four, if you count the SR5) years over a quarter century ago.

For more AE86 Nights, see our coverage from the 6th and 5th anniversary events, as well as the bonus gallery below. 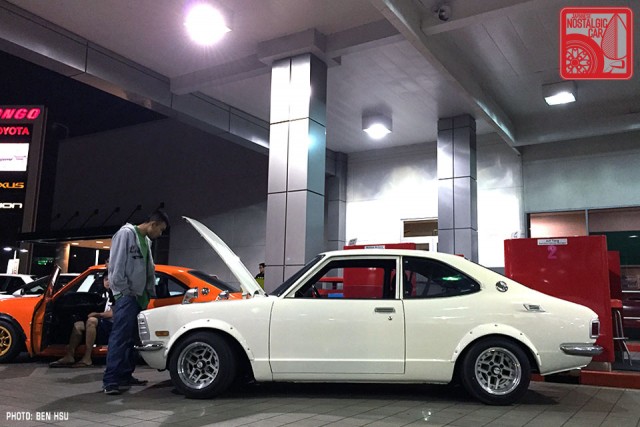 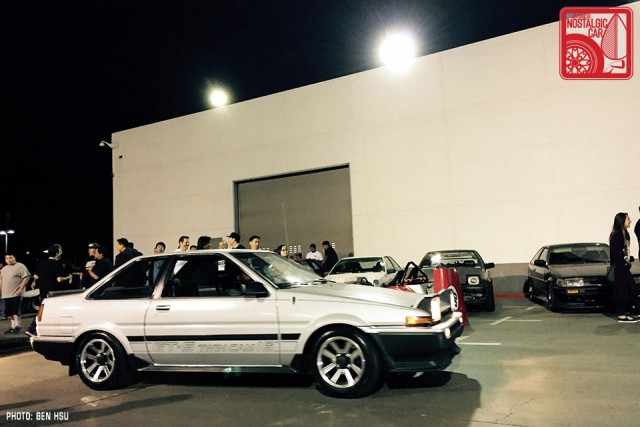 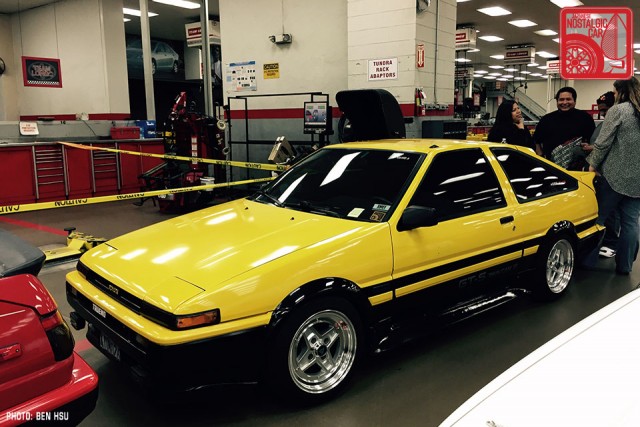 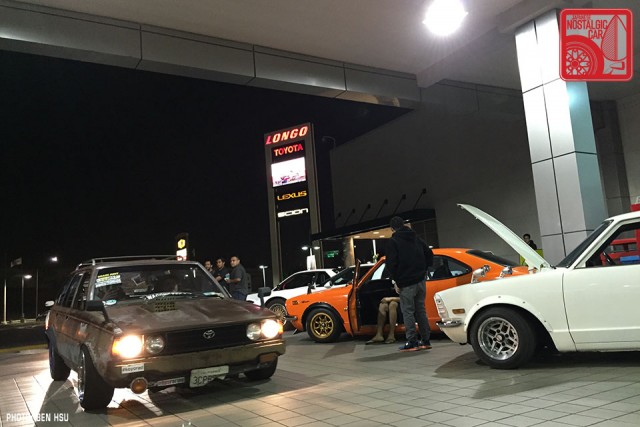 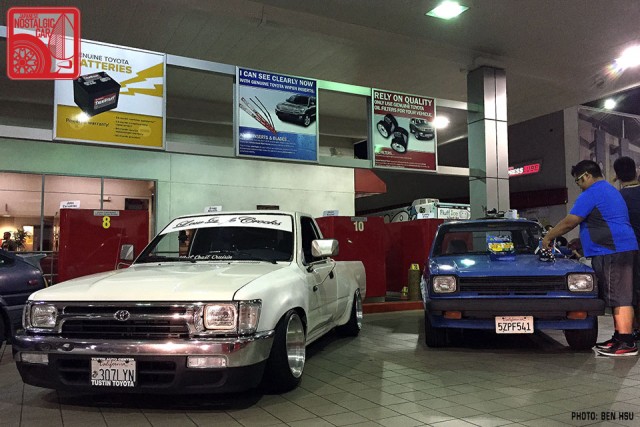 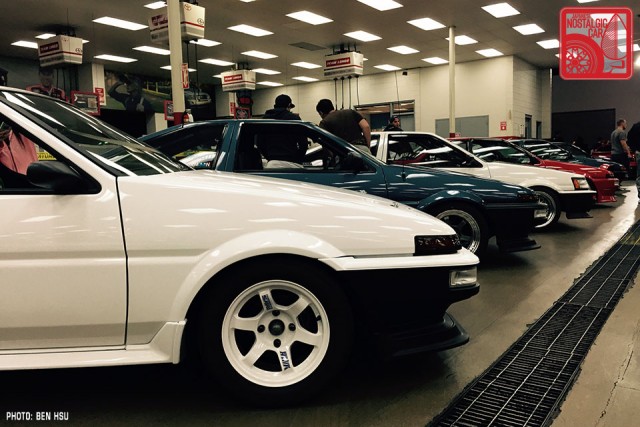 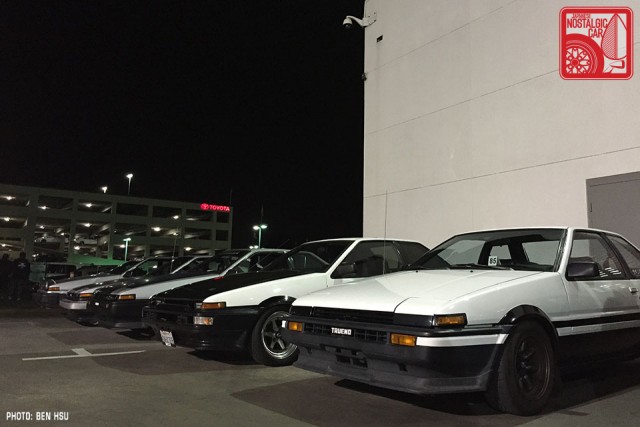 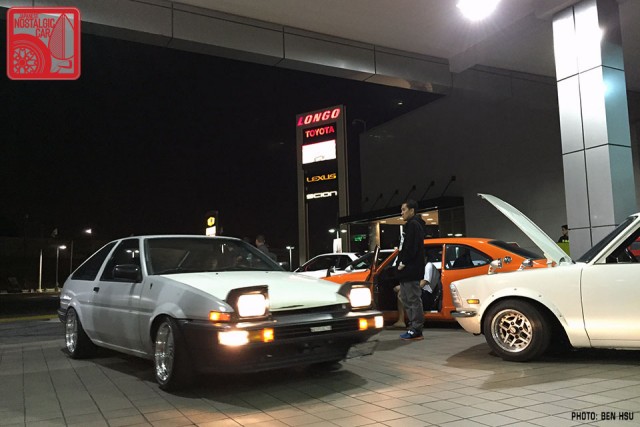 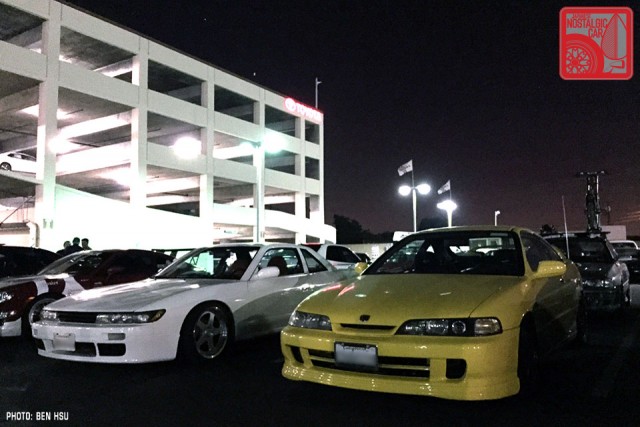