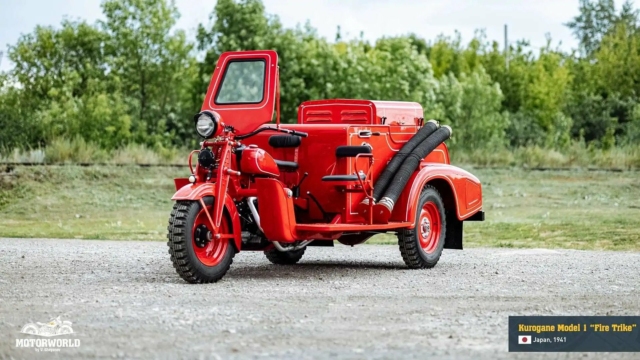 A motorcycle museum in Russia is painstakingly restoring a very rare Kurogane Model 1 fire trike. Believed to be the only surviving example, it was uncovered in decrepit state in Malaysia, where it fought fires after being exported from Japan.

The museum is called Motorworld by V. Sheyanov, located in Petra-Dubrava, Samara, and it specializes in classic and rare motorcycles. Somewhat oddly, it seems to have no Honda, Yamaha, Suzuki, or Kawasaki bikes, but it does have Kuroganes.

Kurogane was a marque known for not only the world’s first mass-produced compact 4WD car, but its tractors and motorized tricycles. What it should be more known for, is its very cool name, which translates to “black metal”. Most Kurogane vehicles were manufactured for and also subsequently destroyed in World War II. It is one of the countless motorcycle manufacturers lost to history in Japan.

It’s not out of the ordinary for Japan’s municipal vehicles to wind up in other Asian countries after their service life in Japan. What Japan considers to be obsolete and unusable is probably still considered to be very good by most other countries’ standards.

Although considered the last of its kind, this motorcycle is not the sole Kurogane at Motorworld by V. Sheyanov in Russia. They also have two Kurogane Type 95s, including one with military colors, and another non-fire fighter Model 1 trike. We think this one is in good hands.

via A Ride Apart

permalink.
This post is filed under: Motorcycles and
tagged: Kurogane, motorcycles.