A Brief History of the Toyota AE86 Corolla

In the second of a series, JNC is teaming up with our friends at Petrolicious to launch simultaneously a video and an article about historically significant Japanese cars. Be sure to check out the excellent Petrolicious and their beautiful short films about vintage cars.

For the uninitiated it’s a “just a Corolla,” but the AE86 goes by many names. Anime star. O.G. drifter. Hachiroku. Overhyped. AE86 itself is perhaps the nerdiest of them all, named after Toyota’s internal chassis code for the model. Even as recently as a couple of tears ago, one could still make the claim that the 1985-97 Toyota Corolla GT-S was unappreciated or underground for most of its life. Now, as it turns 30 years old, that’s no longer true. As if you needed another reminder that you’re getting old, the AE86 has spent more than half its existence hoarded, hooned and fanboy’ed as one of the most important cars Toyota’s ever built. 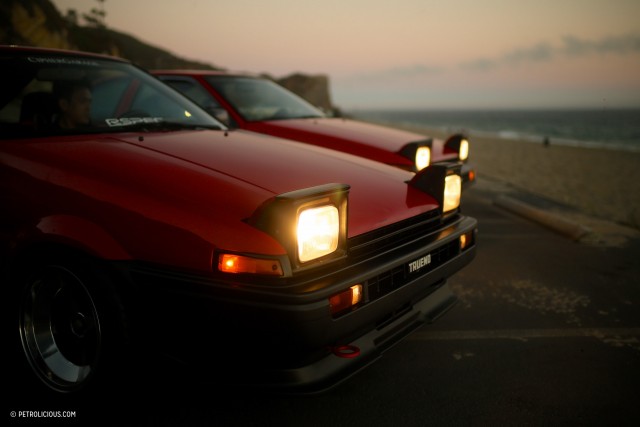 The early 1980s were a strange time. The entire Japanese auto industry had changed their minds in a pivot worthy of any fashion rag: rear-wheel-drive was out; front-wheel-drive was in. This was especially true at Toyota, where cars like the Corona, Camry and Celica all became pullers instead of pushers (that is not a typo; the Camry was once RWD).

However, there was one anomaly in the lineup. In a move that would be unthinkable today, Toyota offered two completely different versions of its Corolla, built on two completely different platforms, sold at exactly the same time. Four-door sedans and five-door hatchbacks would be FF, while sportier two-door coupes and three-door liftbacks would be FR. Got that? four body styles, two drivetrain configurations. 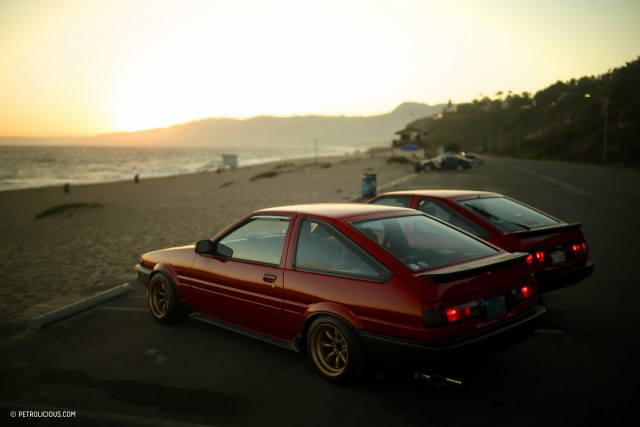 Ask any 86 fiend today what makes them so special, though, and they won’t just answer with the layout. After all, the chassis was largely carried over from the previous generation, when all body styles were RWD. Instead, it was the addition of the legendary 4A-GE motor, a high-revving, twin-cam, fuel-injected, multivalve four. Offered only on top-shelf GT-S models, it offered a 50 percent bump in power and screamed to a 7,600 rpm redline. A tuned version of the motor was even used in the Formula Atlantic open-wheel racing series.

So how much power did this wonder mill make? A whopping (get ready for it) 112hp. That doesn’t seem like a lot until you pair it with a chassis that weighs just 2,381 pounds (2,346 for the two-door coupe). Add four-wheel disc brakes and you have a massively tossable package that’s an absolute hoot to drive. 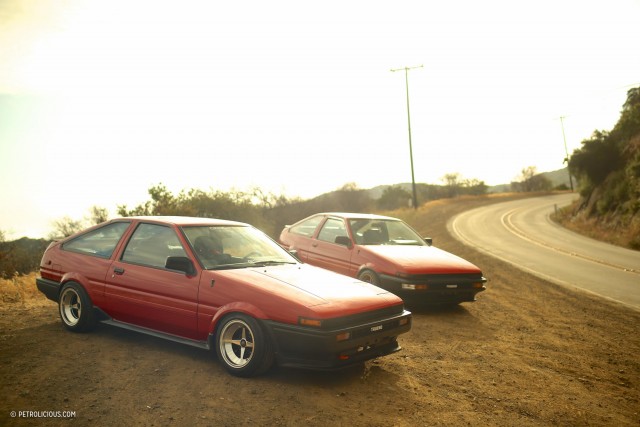 And drive them they did! In Japan, where 70 percent of the land is mountainous, the 86 was an instant hit on the touge, the narrow mountain passes where drifting began. Perfect for the environment that spawned it, the 86’s compact size, light weight, and acrobatic agility were born to tackle winding roads with more twists than a nest of anacondas.

If that scenario sounds at all familiar, it’s probably because you’ve encountered the work of Shuichi Shigeno. In 1995, Shigeno began penning the seminal street racing manga Initial D. Glamorizing the midnight touge battles that were happening for real in Japan at the time, the story was chock full of modified cars, moody teens, and a giant killing 86 that defeated everything from Lancer Evolutions to GT-Rs. 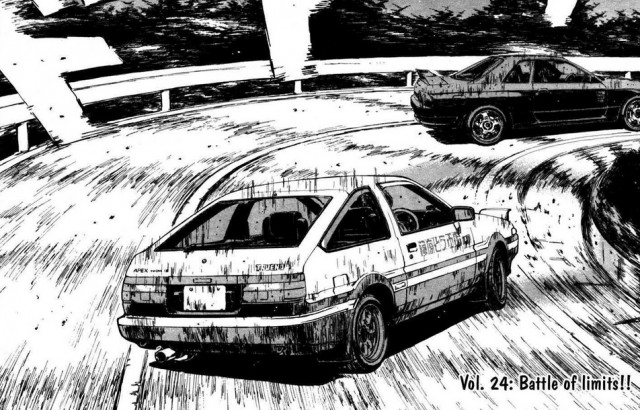 In 1998, the story was turned in a hugely popular anime series that crossed over to the US just in time for the dawn of sanctioned drifting as motorsport. Suddenly, long forgotten AE86s were snatched up by aspiring downhill racers. Inevitably, many were destroyed. Eventually, the AE86’s status as the “it” car faded as drifting became more about generating tire smoke with big horsepower numbers and less about a low-hp display of car control.

The 86 had become obsolete in the sport it started, save for a number of stubborn old schoolers. Now that the trendies have moved on to LS-swapped RX-7s and such, the best examples of the breed can be found amongst a small cadre of hard core fans that have been “in the 86 game” since before it was cool. 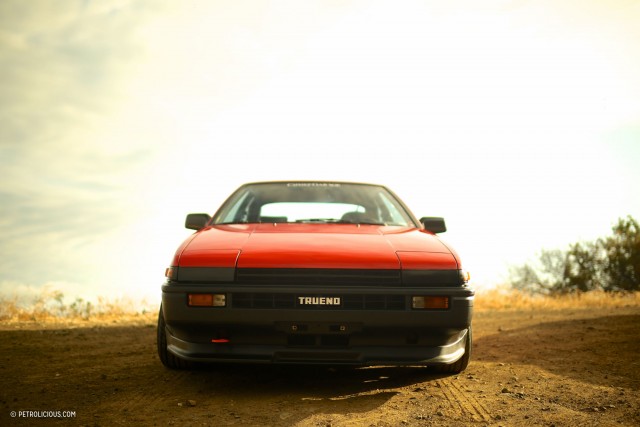 Of course, a large part of the 86’s appeal was its vast number of variants loaded with JDM parts, allowing one to immerse themselves into depths of arcane knowledge. Toyota built two different versions for two of their dealer networks in Japan. While mechanically identical, the biggest difference was that the Corolla Levin had fixed headlights while the Sprinter Trueno had quintessentially 80s pop-ups. In Europe, only the fixed-headlight versions were available, but they were still called Corollas.

Export-wise, the US received only the pop-up headlight variant, branded as a Corolla SR5 if equipped with the single-cam, carbureted base engine, or Corolla GT-S with the 4A-GE. On top of that, there are what the Japanese call the zenki (pre-facelift 1984-85) and kouki (post-facelift 1986-87) models, both of which had import and export variations. 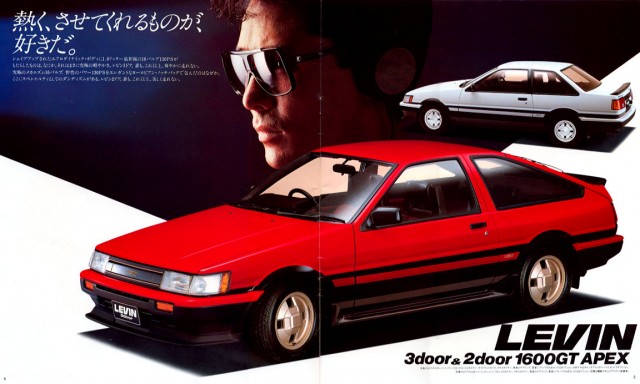 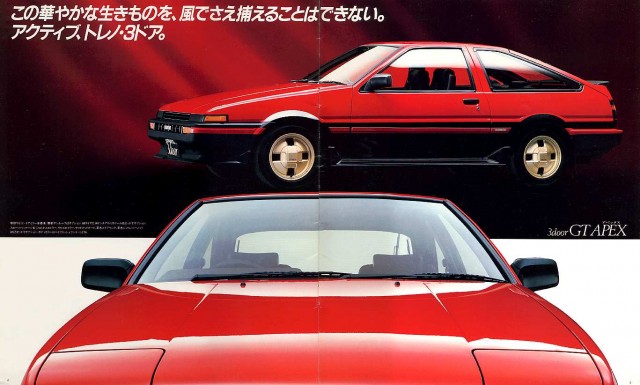 Have we lost you yet? That’s two models (Levin, Trueno) of two body styles each (coupe, liftback), each of which had two designs (zenki, kouki) for three different markets (Japan, US or Europe). Phew! Because the USDM models were equipped with clunky 5 mph safety bumpers, it was fashionable to ditch them for their Japanese counterparts.

It’s rare enough to have one version, but Antonio Alvendia, founder of 86Fest, MotorMavens, and a prolific automotive photographer, has two prized JDM-converted AE86s, one zenki and one kouki. It is perhaps only fitting that I am now writing about Antonio’s cars, because because years ago he photographed my own AE86 for a now-defunct car magazine. 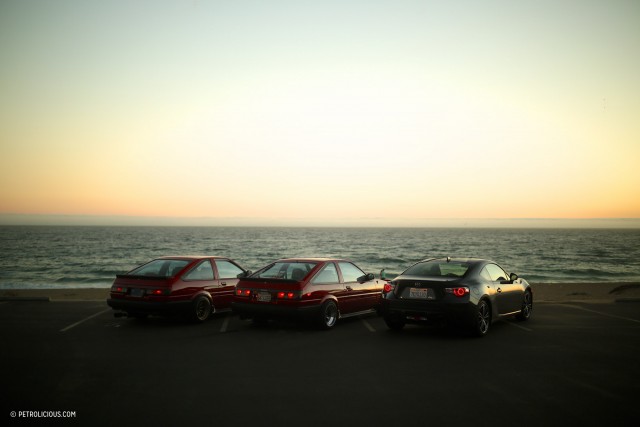 Now that it’s a bona fide classic, all those years of preaching “it’s not just a Corolla!” to non-believers doesn’t seem so silly anymore. It also helped that in 2012 Toyota itself debuted a new lightweight, rear-wheel-drive sports coupe. As a nod to the original, each one wore an “86” badge on the fender. This, even though in the US it’s called a Scion FR-S and absolutely no further explanation is given for the mysterious emblem down at the Scion dealership.

In Japan, however, where the original has become a national icon, it’s simply called the Toyota 86. When was the last time an automaker revived not the name of an old model, but the enthusiast’s nerd-slang for its chassis code of that model? That, perhaps, is the ultimate recognition of its significance.

For more on Antonio’s Toyota AE86s, check out Petrolicious.

10 Responses to A Brief History of the Toyota AE86 Corolla