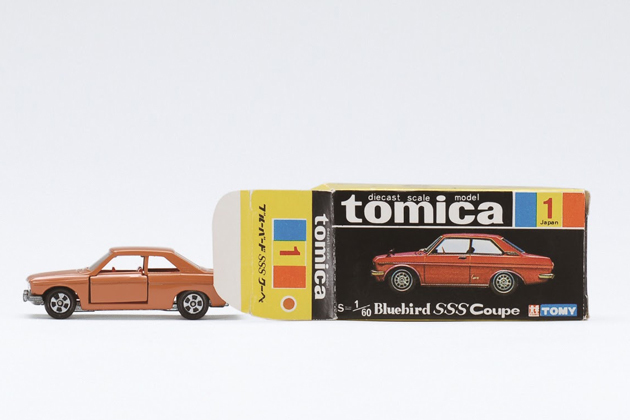 Fifty years ago today, car culture in Japan was forever changed with the introduction of Tomica, the country’s first authentic diecast miniature cars in the 3-inch range. Launched on August 18, 1970, they quickly became the most popular diecast toys in Japan, inspiring generations of car enthusiasts. As of January 2020, 670 million have been sold, or one every two seconds. In the half-century since the launch, there have been over 1,050 Tomica models produced, and the basic Tomica car still comes in the same-sized 78mm cardboard box that the originals did. 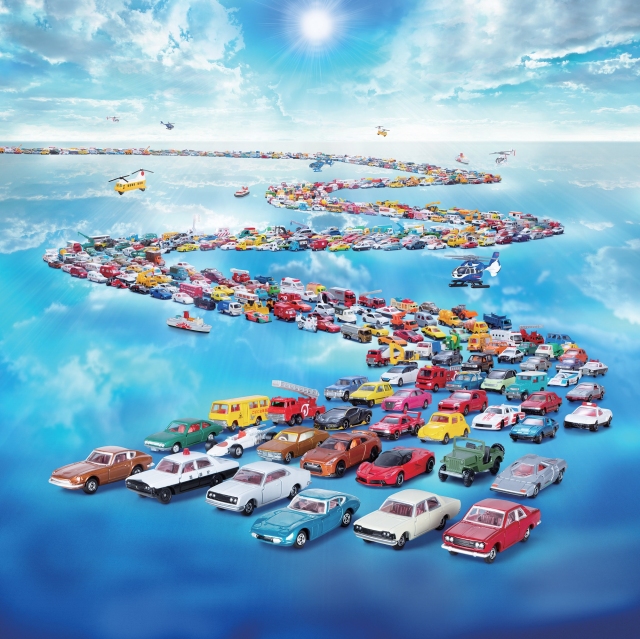 Prior to Tomica, toy cars in Japan consisted of post-war tin toys and larger diecasts. However, there were no domestically made toys that fell into the 1:64 scale range, considered the perfect size for a toy because it could fit onto the palm of a child’s hand. Toy cars of that scale were all imports, most popularly Matchbox, and their lineups made up of European and American models. Japanese cars were nonexistent, a far cry from the post-Imai era Hot Wheels we know today. 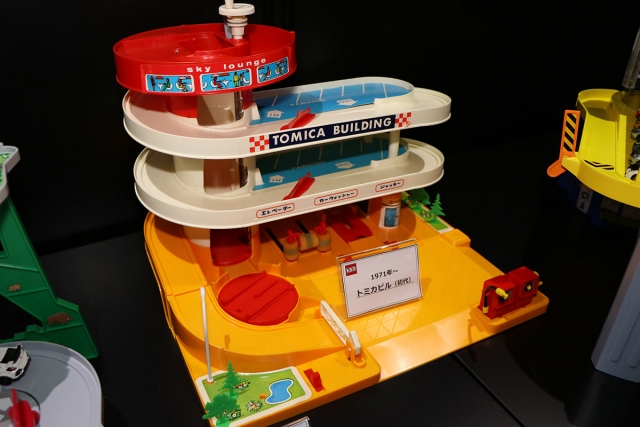 According to Masaya Toyama, the second president of Tomy, Tomica’s parent company, it was his dream to create a line of diecast vehicles that included domestic cars and trucks. Toyama said that in the 1960s he would often visit department stores and see a dazzling array of miniature cars. But, the foreign cars were unfamiliar to Japanese children, and if a kid in Japan wanted a replica of his dad’s Toyota Crown, he was out of luck. 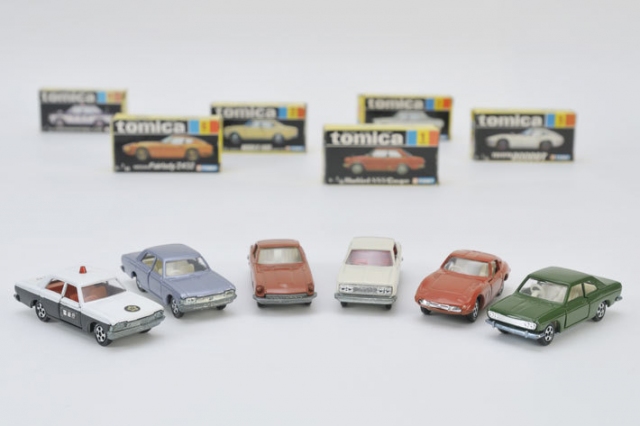 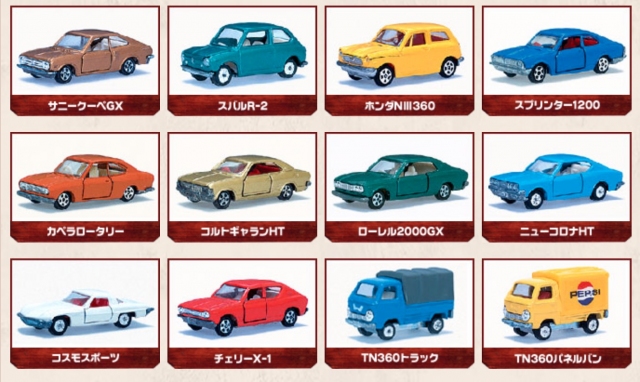 They were such a hit, that by the following year the lineup was expanded to 30 cars, including classics like the Mazda Cosmo Sport, Hakosuka Nissan Skyline, Toyota Celica 1600GT, Mitsubishi Colt Galant, Honda 1300 Coupe 9, and Subaru R-2. 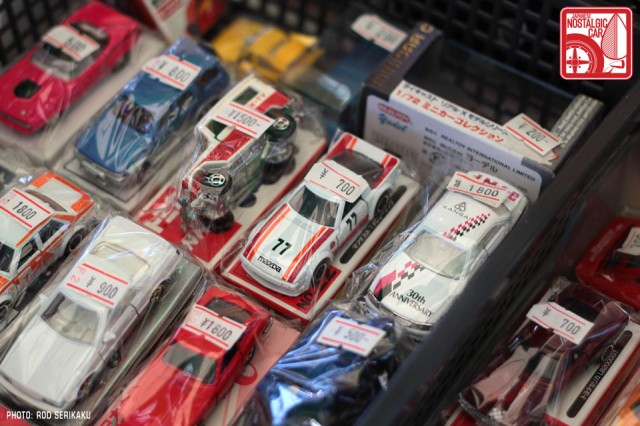 The vehicles portrayed by Tomica often mirrored trends in 1:1 scale cars. Initially, the lineup was limited to passenger and sports cars. However, by 1972 work trucks by the likes of Hino and Isuzu joined, along with construction vehicles by Komatsu, Furukawa, and Kawasaki Heavy Industries. Their appearances weren’t happenstance. Prime Minister Kakuei Tanaka’s massive infrastructure programs fueled a construction boom, prompting a rise in popularity among bulldozers and dump trucks. 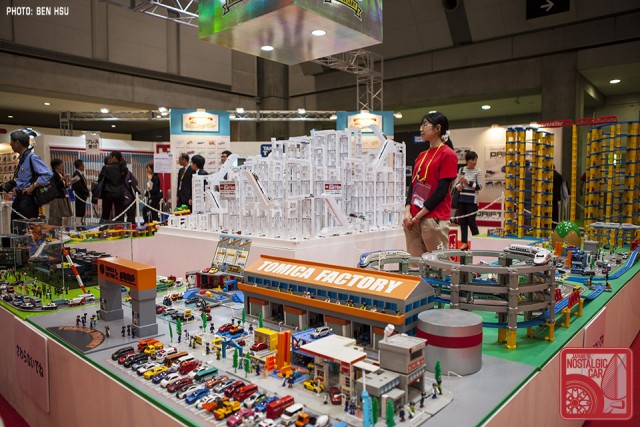 In 1974, as the lineup grew to 100 models, Tomica began exporting cars to North America under the Pocket Cars brand. Following the oil crisis, Tomy raised price was raised to ¥220 back home. However, the higher price point compared to Matchbox and Hot Wheels cars, combined with the fact that the Japanese models were not well known in the US, meant that their success would be limited. 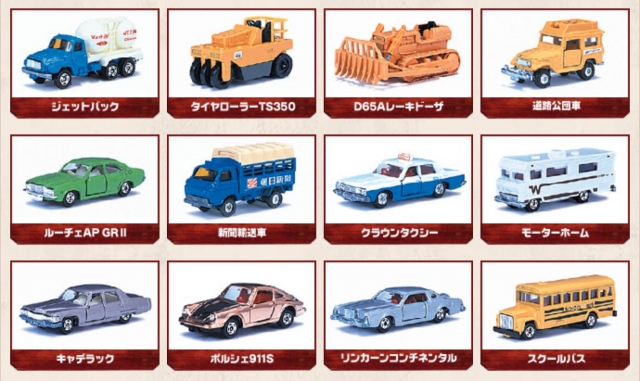 In an effort to appeal more to overseas customers, especially in the US, Tomica in 1976 introduced the “Foreign Car Series.” The first car to grace this lineup was the Winnebago motor home, followed quickly by models like the Cadillac Fleetwood and Dodge Coronet. The localization of these models sometimes led to interesting names like the Ford Continental Mark IV or Datsun Skyline GT-R. 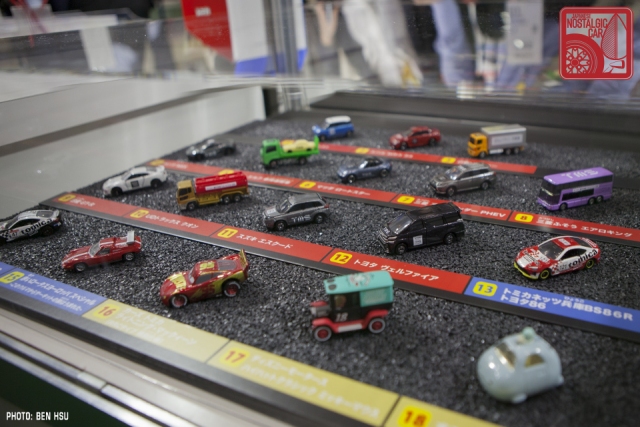 Initially comprised of American and German cars, in 1977 the Foreign Car Series swelled to include Italian, British and French cars. Notably, Ferraris, Lamborghinis, and Lotuses reflected real-life automotive trends such as the supercar boom. At its peak, the Foreign Car Series had 70 cars, but by 1988 they were combined into the regular line. 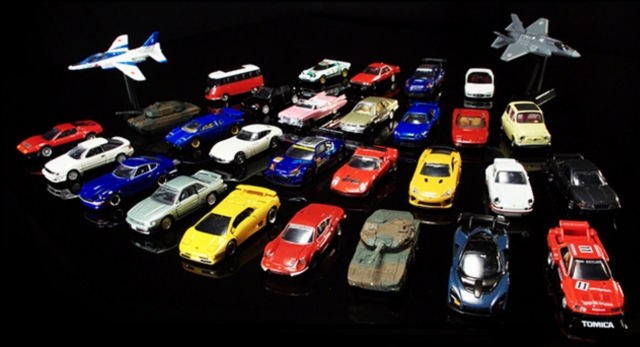 Through the 90s the trend of Tomica collecting experienced a significant surge, and in 2001 Tomy launched a line of highly detailed cars called Tomica Limited aimed at the adult collector. They cost a bit more, but had details such as painted lights and trim, unique wheels accurate to the real-life versions of the cars, and rubber tires. This line ended in in 2013, but was succeeded by the Tomica Premium line, which launched in 2015. 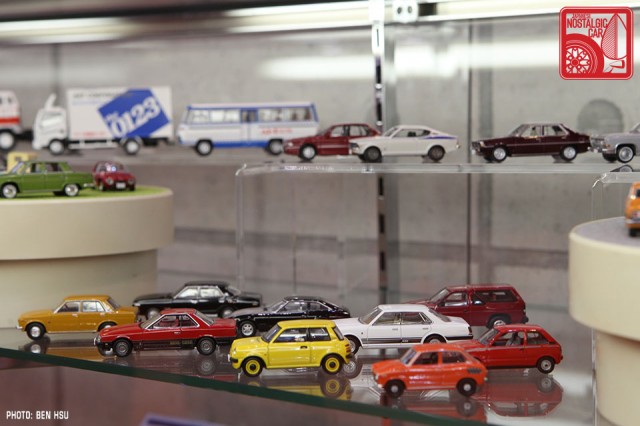 In 2004 another line, Tomica Limited Vintage, took 1:64 cars to a whole new level, with super-accurate details that one would normally find on cars of much larger scale. More importantly, the subject covered obscure Japanese classics previously unavailable in 1:64 scale, like the Mazda Luce Legato or Suzuki Fronte.

Over the years, Tomica has released countless gift sets exclusives, playsets, and special editions. Several times a year, there are Tomica Expos held across Japan, each with their own special event models. In major cities like Tokyo and Osaka, there are Tomica Shops that have their own exclusive models. There are sets unique to various convenience store chains, often times in blind boxes and chase cars so that you have to buy several extras to acquire the whole set. 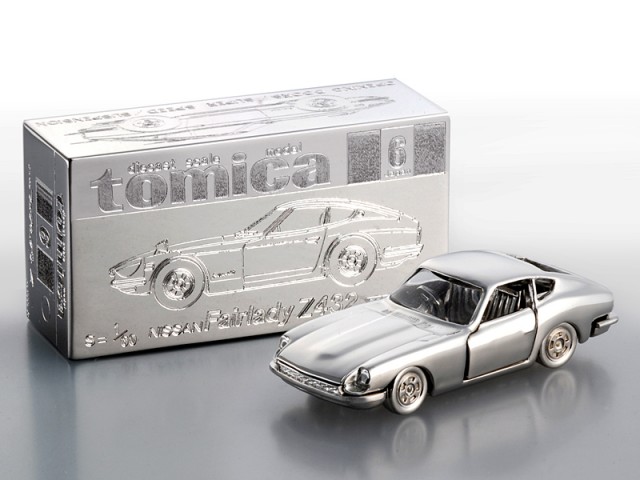 There are partnerships with soda companies, tour bus companies, taxi companies, and more. And there have been limited edition exclusives in collaboration with just about every museum, event, and tuning house in the country. There have even been $80,000 Tomica made out of pure platinum. Even if you had Jeff Bezos money, it would probably be impossible to collect them all. 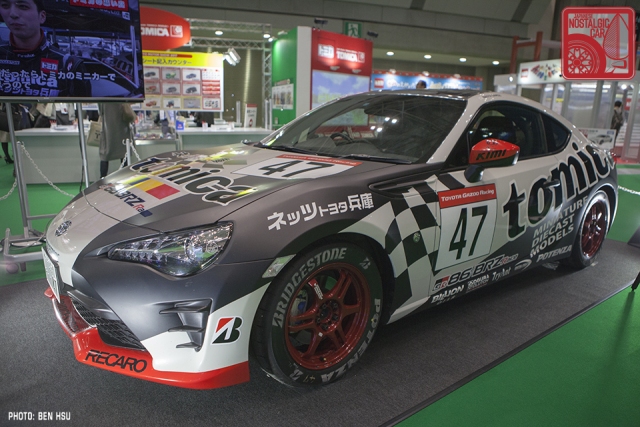 As much as real cars influenced Tomica, Tomica also influenced real cars. Since 1988 Tomica has settled into a 120-car lineup. Models will change according to the times, but as new ones are introduced every year they replace existing vehicles. Thus, the 1-120 system is an ingrained part of the Tomica brand.

However, in 2003 a 121st Tomica appeared. In actuality, it was a collaboration between Tomy and Mitsuoka Motors, purveyors of the notorious Orochi. The Convoy 88 electric vehicle’s specs weren’t anything to write home about — a 34 mph top speed and range of just 43 miles costing ¥1.03 million (about $9,700 USD) — but the point was that it was a 1:1 scale Tomica. It even came painted like the red and white box of a Tomica car. Of course, Tomica also released a diecast version of it. 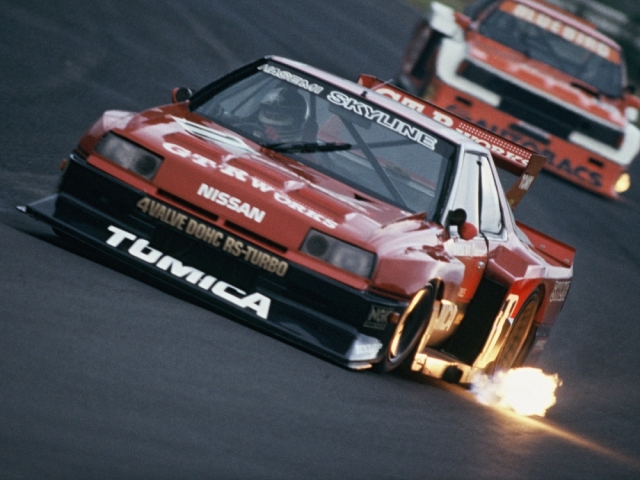 The Convoy 88 was curious, but no coversation about real Tomica cars would be complete without discussing the famous Nissan Skyline Turbo race car. Following the oil crisis of 1973, Nissan had famously suspended its works racing program, killing off what would have been the Kenmeri Skyline GT-R race car after a showy debut at the 1972 Tokyo Motor Show. Ten years later, the Skyline returned to racing with dramatic effect in the form of a KDR30 Skyline in the Group 5 Super Silhouette series.

The star of the series was undoubtedly the “Tomica Skyline Turbo,” which excited Skyline fans that had long awaited its return to the track. Somewhat uniquely among race cars, it wore the same red and black two-tone of its RS street guise, with the word “TOMICA” plastered across its chin spoiler and sides. As a bonus, it was piloted by none other than Masahiro Hasemi, one of the original works drivers of the Hakosuka Skyline GT-R.

As one of the most iconic cars in Japanese racing history, the look has been replicated many times on real cars. It’s no wonder, then, that when Tomica invited Japan’s top carmakers to come up with designs to help celebrate its 50th anniversary, Nissan’s was an homage to the Skyline Turbo on an R35 GT-R. In fact, it was one of several designs put to a vote, and fans overwhelmingly chose the classic livery, proving just how influential it was. 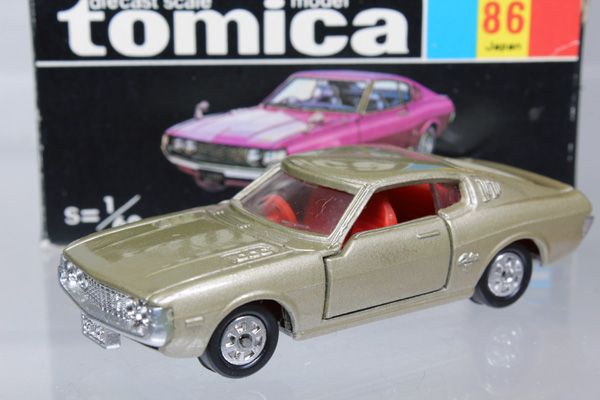 Tomica are so influential, many of the individuals responsible for the cars we drive today have been inspired by them. Hideki Kakinuma, chief engineer for the Honda Civic Type R, for example, once said that he fell in love with cars because of a Tomica. Specifically, it was a gold Toyota Celica Liftback, which he would gaze upon longingly on his way home from school every day. 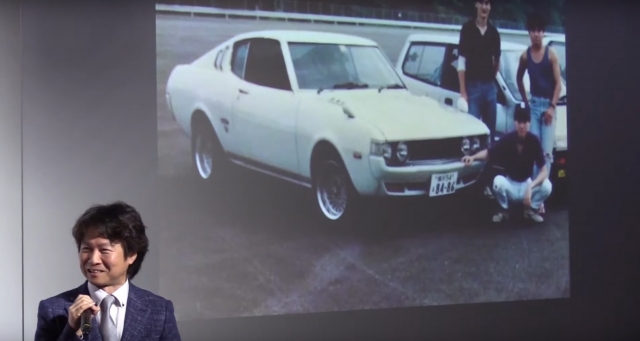 Eventually, his mom bought it for him, but in his excitement he brought it to school and lost it the very next day. That bittersweet experience led Kakinuma to buy a 1:1 scale Celica later in life, which he modified and raced, putting him on the path of creating the Civic Type R. 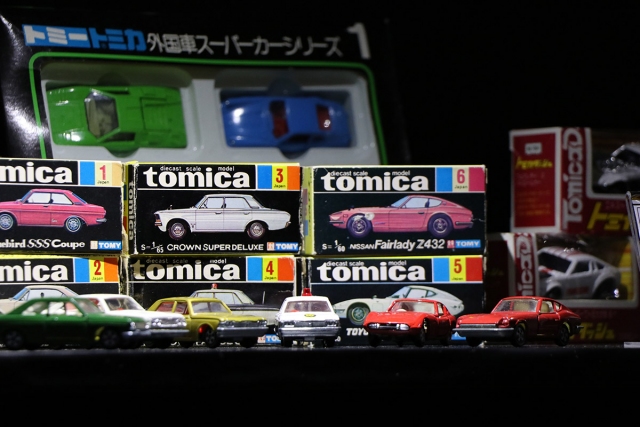 Now there’s a Tomica version of the car that Kakinuma built too, ready to inspire a new generation of kids. That’s the power of these toy cars. Masaya Toyama passed away in 2005, and it’s unknown if he was familiar with Kakinuma’s story. Even so, if he’s with us in spirit, it would probably bring him great joy to learn that his dream of creating toy cars which could be enjoyed by kids throughout Japan (and adults around the world) was realized.

permalink.
This post is filed under: 50 Year Club, minicars and
tagged: tomica.