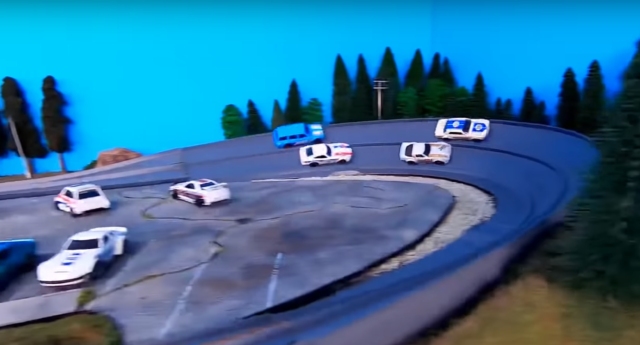 Round One of 3DBotMaker’s JNC tournament is here, and it’s a nail-biter. We have a beautiful lineup of, by coincidence, color matched classics with a heavy white, blue and red theme. The race is run four times, with cach of the four cars — a Hako GT-X, SA22C RX-7, 240Z, and 510 Wagon, all made by Hot Wheels — rotating through the four starting positions. Let’s see how they do.

There’s a lot more action with four cars on the track than during the single-car runs in qualifying. Glenn is the only actual race car driver among us, so it’s no surprise that he had the best pass, sneaking past Carrie and Ryan’s Skyline and RX-7 duel. Unfortunately, real-life experience doesn’t translate into diecast racing skill, and the Z ends up dead last in the next run.

An early crash on the third run takes out Glenn’s Z and Ryan’s RX-7, leaving my son Luca Cedric to take the win (with a little help from mom). Thanks to the points-based system, it’s really anybody’s race to lose by the final run, but Ryan pulls the Hollywood trick of driving in reverse at top speed to take the win.

That means Carrie’s Hako and Ryan’s RX-7 move onto the final round two weeks from now. Of course, it also proves these races are not staged, since there’s no way we would have chosen to have my son get eliminated. We were all rooting for you, buddy. One thing’s for sure, though. Watching that white and blue Hako take 3DBotMaker’s sharply banked curves reminds us of the glory days of Fuji Speedway.

Stay tuned next Saturday, July 24, at 6:00am Pacific for Round 2 on 3DBotMaker’s YouTube channel, where we’ll see Ricky’s Celica, Patrick’s Laurel, Dave’s RX-3, and my 2000GT go head to head.

3 Responses to 3DBotMaker’s JNC Tournament Round 1