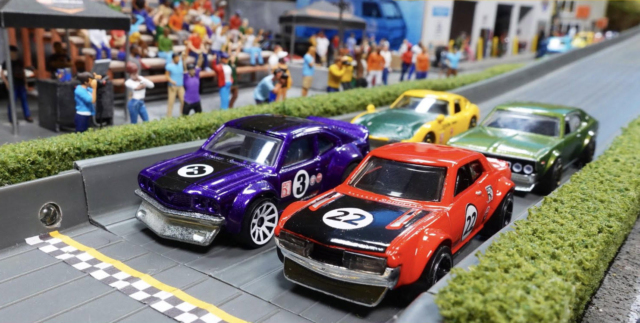 Round Two of 3DBotMaker’s JNC tournament has aired and, man, I am disappointed in myself. By all accounts my Toyota 2000GT should have been fast — it was painted like the Yatabe record breaker after all — but I didn’t account for the fact that Dave Yuan was such a ferocious driver.

My 2000GT looked promising during qualifying, but Dave’s RX-3 won three out of the four runs, posting the highest points total so far, including all the drivers from Round One. I ended up, on various runs, crashing into the RX-3, flipping over, and crashing again into Patrick’s slow-ass Nissan Laurel. Thank the J-tin gods these are only diecast cars.

In the end, Dave dominated the day, while Ricky’s steady driving in the Celica placed him in second. The good news is, going into the finals, we’ll see a true showdown between the Hakosuka Skyline and RX-3 in the finals, recreating the epic rivalry from Japan’s early touring car days. Tune in next week for the final round on 3DBotMaker’s YouTube channel.

4 Responses to 3DBotMaker’s JNC Tournament Round 2