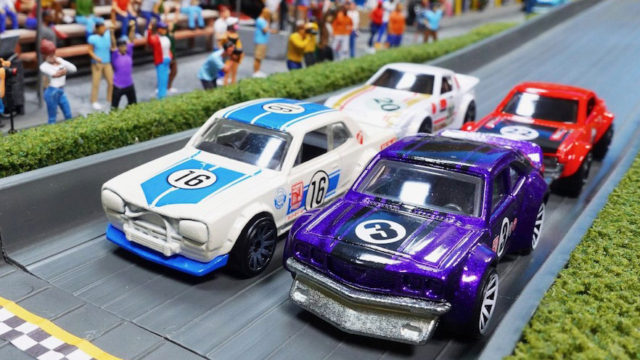 Well, here it is the final round of 3DBotMaker‘s Japanese Nostalgic Car tournament. Who’s going to win? It’s the moment you (or at least we at the JNC water cooler) have all been waiting for. The two top finishers from Round 1 and Round 2 have advanced into the finals and will go head to head against each other.

What we like best about this final round is the fact that we get to see what is probably the most historic face-off in early Japanese motorsports replicated in diecast form. It’s the Hakosuka Skyline (in Kunimitsu Takahashi livery, no less) against a Katayama-flared Mazda RX-3. We know that in real life the rotary stole the Skyline GT-R’s 50th touring car victory, but how will our resident Mazdafarian Dave Yuan do against my wife Carrie in the Hot Wheels version? Carrie, for the record, showed no mercy against our own son in Round 1.

Of course, going into the finals Ryan Senensky’s SA22C Mazda RX-7 was the odds-on favorite having qualified with the fastest time. Ricky Silverio, the representing Toyota in the Daruma Celica, was never the outright fastest but showed enough consistency to earn a top slot.

Without going into spoilers, the tournament had all the best hallmarks of real auto racing. There were plenty of chaotic turns, unexpected twists, and even a nail-biting points contest right up until the very end. There was much cheering as we watched it for the first time. 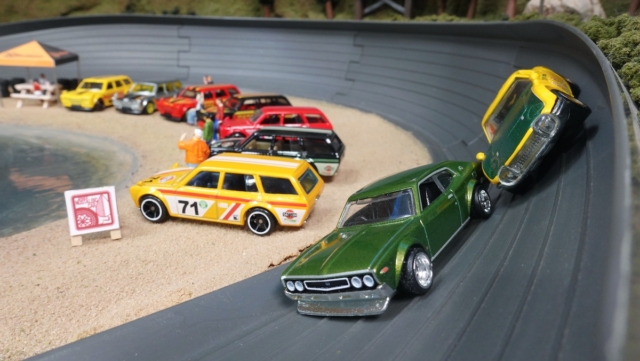 We’d like to thank the incredible 3DBotMaker for partnering with us in this tournament. We can’t imagine all the work it takes to set up the track, record the race, announce it, and edit the video. But, it was enormously fun for us to wake up every Saturday this past month and watch the diecast action. Domo arigatou gozaimasu!

While this is the end of the JNC tournament, our winner will continue to represent JNC in a finals tournament coming later this year against the winners of other themed tournaments. And stay tuned to 3DBotMaker’s YouTube channel for more diecast racing.

permalink.
This post is filed under: minicars and
tagged: 3DBotMaker.