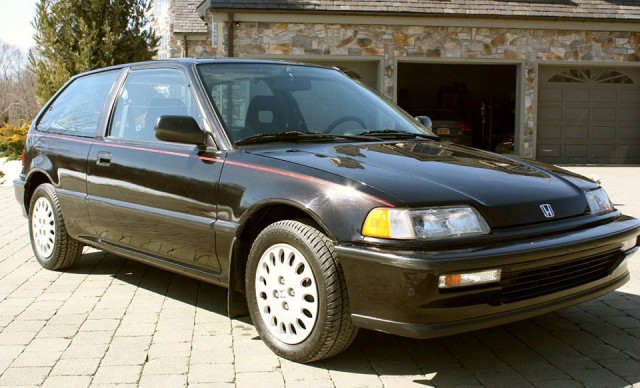 For the Honda purist, online searches are a form of self-flagellation. You’ll want to go all Oedipus on your eyeballs after witnessing what crimes the average shocker-rockin’ Civic owner perpetrates on Soichiro’s creations. But wade through enough garish paint jobs and pointless faux vents and you just might find a pristine, unmolested EF Si hatch.

Launched in 1987, the EF Civic Si was instrumental in kicking off the whole tuner craze. Honda was firing on all cylinders, and technology from its successful Formula 1 program was trickling down to even its most basic economy cars, putting them light years ahead of the competition with four-wheel double-wishbone suspensions and the renowned VTEC system.

Unfortunately, that raciness within reach also made Hondas positively irresistible to teenagers who would rather paint their wheels magenta and staple a giant slab of carbon fiber onto the trunk than appreciate a car for what it is.

That’s why this 38k-mile 1990 Honda Civic Si in Brewster, New York is such a gem. Aside from an A/C conversion to R134a, it appears to be original. According to the seller, it has no rust and has always been garaged and dry since he took ownership of it in 2011. We don’t know what its life was like before that and the paint does look a bit swirly, but with such low mileage wear is most likely minimal. Mechanically, Hondas of this vintage are near flawless, and at 38,600 miles the engine’s barely broken in.

At the time of this writing the auction has seen 28 bids with a price of $3,575, which is still a steal for a rare specimen that will certainly appreciate in value. A Buy It Now and likely reserve price of $6,500 is less of a bargain, but hopefully keeps the ruinous kiddies away. See the auction on eBay.

permalink.
This post is filed under: for sale and
tagged: civic, ef, honda, kidney anyone.