Oops, someone has already wrecked a new Nissan Z 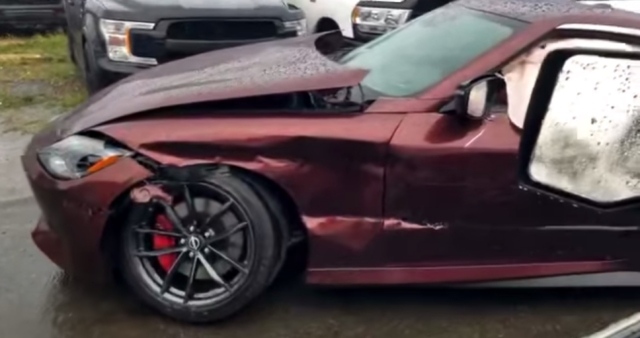 As you read this the Nissan Z is just arriving at dealers, but the first documented crash involving the new 400-horsepower sports car has already occurred. As it happens, the Z configurator went live on Nissan’s US site only two weeks ago, and this destroyed Z is exactly how we spec’ed our car. Sadly, the unknown buyer with great taste never even got to drive it, as this wreck happened on the dealer lot.

Well first one to bite the dust… 💀

According to Carscoops, the sheetmetal was newly adjusted at a Puerto Rico dealership. The incident was posted to social media by someone named Rubert. The car had already been sold but before the new owner could take delivery of it, the article says, a detailer working at the showroom attempted to drift it in the rain. Instead, they rammed it into a Ram truck.

No amount of detailing will buff it right out. The entire left side of the car from headlight to taillight has been severely creased. The side curtain airbag on has been deployed, and the rear wheel looks like it might be hiding some suspension damage.

It hurts a little to look at it. When we configured our Z it was with an eye toward collectibility. Rosewood Metallic in Performance trim, like the crashed Z, was exactly our choice for color and grade. The Performance spec added factory 4-pot Akebono front calipers, a 1.5-way clutch-type LSD, 19-inch Rays wheels, and some creature comforts. The paint was a homage to the Grand Prix Maroon of the 240ZG, and was one of three available without a black roof. Despite its damaged state, the color looks even better than we imagined from the configurator. Now there’s one less example in the world.

6 Responses to Oops, someone has already wrecked a new Nissan Z