That new Nissan Z Superbowl ad is not like the old one at all, because it’s terrible 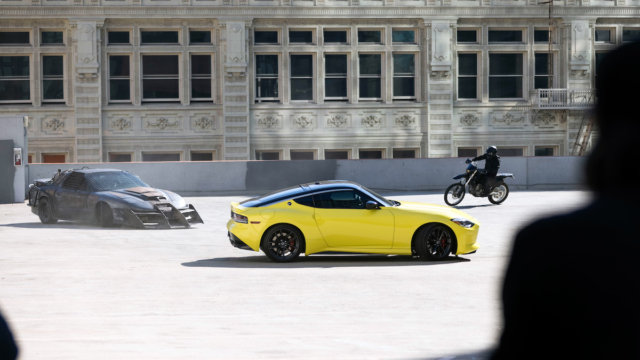 Nissan misled us big time when they released a trailer for their upcoming Superbowl ad. The trailer promised big stunts and chases with motorcycles, helicopters, and Max Maxian Firebirds, but it wasn’t about that at all. In fact, it’s not really clear what it was about at all, except perhaps a big waste of money.

We’ll try to describe what happens as best we can. Brie Larson, as herself, arrives on a movie set in her new Ikazuchi Yellow Z. Eugene Levy, playing himself as well, is impressed, but it’s the nerdy Eugene Levy. He makes some joke about how coffee is enough excitement for him, but Larson throws him the keys to her Z anyway and he takes it for a spin.

His shifts start off jerky, but before long he’s zooming around LA with a big grin on his face. He’s enjoying the Z! He passes Catherine O’Hara in a Nissan Ariya electric SUV. Then he pulls up to a sidewalk cafe where Danai Gurira and Dave Bautista are having coffee. He chirps the tires as he takes off, and then Bautista and Gurira look at each other as a light bulb goes off above their heads. 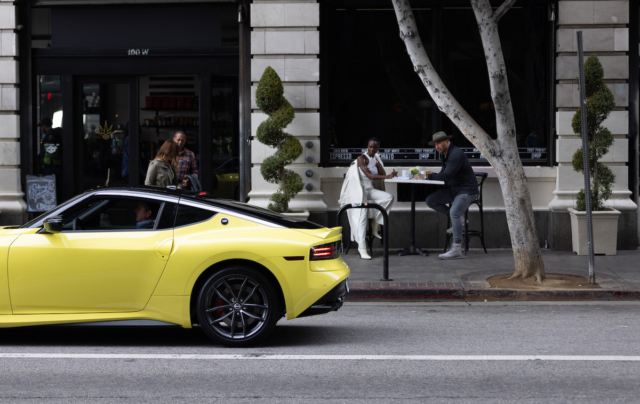 Smash cut to the rooftop chase scene shown in the trailer. Levy is being pursued by the aforementioned motorcycles and Firebird, except now it’s cool guy Levy with long hair. Some truly stupid and poorly CG’ed stunts ensue, involving Levy jumping the Z off the Firebird (five bucks, please) while Gurira launches Bautista off a motorcycle into the somehow open passenger door of the Z in mid-flight. “Watch the coffee,” Levy jokes as Bautista lands in the seat. Turns out all the stars are watching this scene unfold in a movie theater at a premiere and the crowd goes wild.

Now here are the reasons why it’s less than good. And no, we’re not judging it from an enthusiast’s perspective; it’s bad even for the average viewer. First, the plot makes no sense. Was seeing Levy in a cool sports car supposed to be enough to get Bautista and Gurira to pin an entire blockbuster around? In the very car he was driving in real life? Even the layman knows that’s not how movies get made. 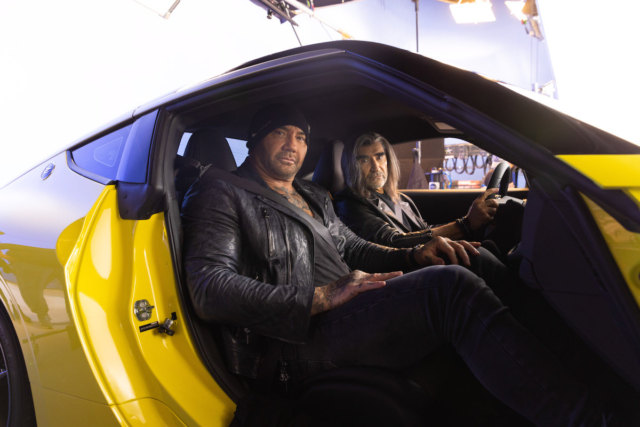 Second, the ad can’t seem to decide if it’s about the Z or Levy. It hinges a lot on his transformation from dork to action star. I mean, the guy was in American Pie and Schitt’s Creek, but he’s hardly — no offense, Mr. Levy — the type of actor whose personality is so well known that he can play against type. And the besides his metamorphosis the main joke is about coffee? People got paid to write that?

Third, the talent of the other stars are completely wasted. We get that Larson was in another much better Nissan ad, so there’s that connection. But Gurira, who was a badass in The Walking Dead and Black Panther, is completely wasted here. So is Bautista, who has proven he’s got great action and comedy chops (here he is in an actually funny movie starring a Nissan). Superbowl ad buys are expensive, and we can’t imagine what it cost to cram five celebs into a 60-second spot. This has a lot of Jay-Leno-and-Jerry-Seinfeld-fight-over-the-first-NSX energy about it. 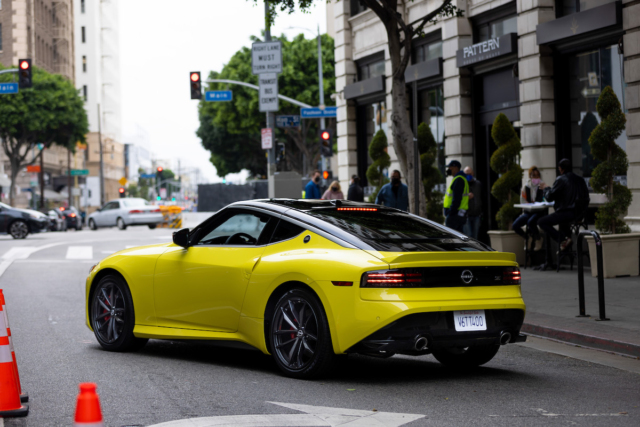 Perhaps what’s making us so salty is the fact that we know Nissan is capable of making good commercials. In fact, they’ve made some of the best car commercials of all time, including that sci-fi Superbowl spot from 1990 introducing the Z32, or GI Joe and Barbie in not one, but two r/c Nissans. Even some of the recent ones have been pretty great.

If we want to be generous, its saving grace might just be that this ad will let millions of non-car nut Superbowl watchers know there’s a new Z in town. At least it got plenty of screen time. And as with blockbusters, the celebs are there to aggregate their fan bases and put asses in seats. Hopefully, at the end of the day, at least some of those asses will be in the seat of a new twin-turbo, 400-horsepower Z with a stick shift.

9 Responses to That new Nissan Z Superbowl ad is not like the old one at all, because it’s terrible