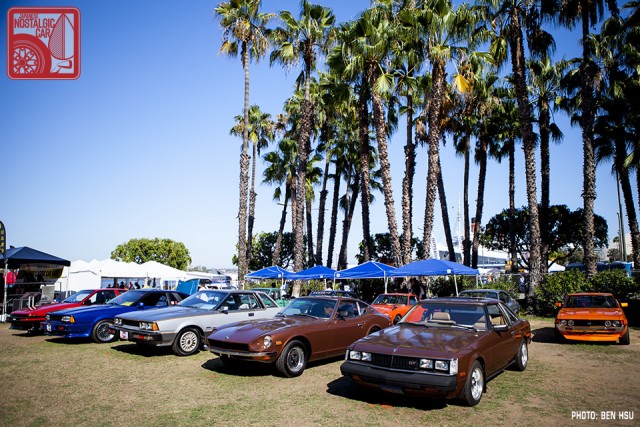 In Japan, shakotan is simply means a lowered car. Many different styles of car can technically qualify as shakotan, but if we’re going to steal a traditional Japanese term, we might as well apply it to traditional Japanese cars. You know it when you see it — small-diameter wheels, limited use of body kits, and steel instead of composite fiber. Can you dig it? 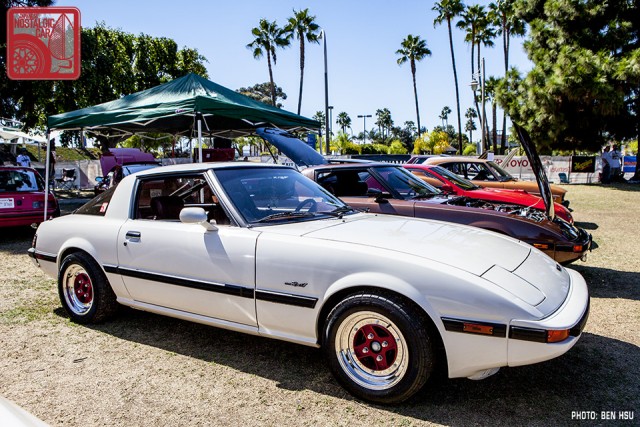 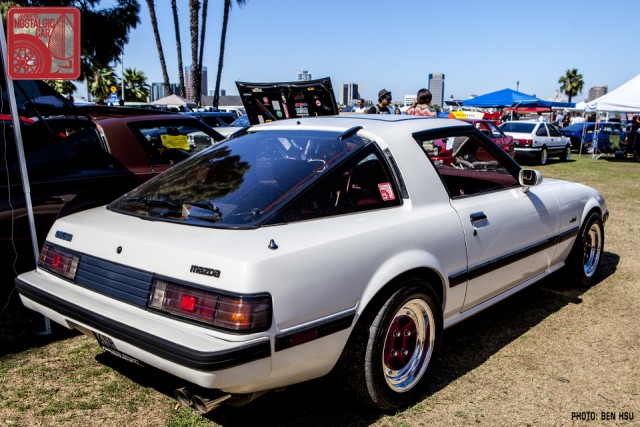 We loved the execution of Alex Bircheff’s FB RX-7. It has a clean body with all the appropriate trim and emblems, a subtle exhaust, and a shiny set of SSRs. The choice of white exterior, maroon interior and red MkIIs make for a perfect color combination, too. 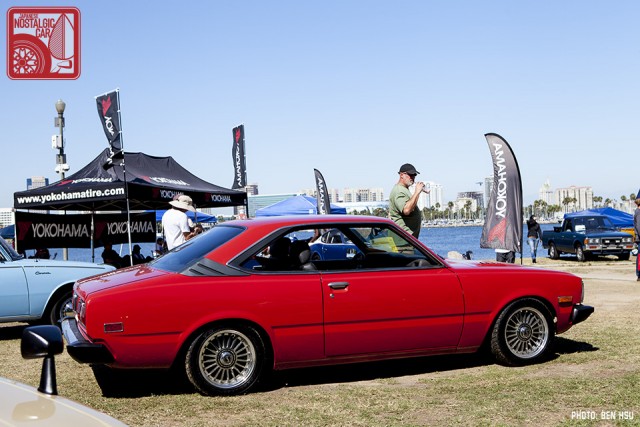 Lawrence Keller’s RT114 Corona Hardtop is a familiar sight to long-time readers, but we like the fact that he can always be relied on to show up with a car that’s a beautiful as it is rare. It’s perfectly matched with Work Ewing 2-piece fins and an 18R-G under the hood. Lawrence always displays his cars with love and simply doesn’t give off the vibe that he is out to flip it or part with it in any way. 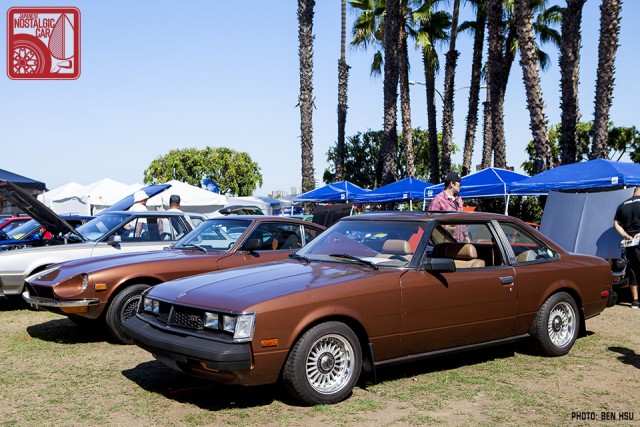 Work Ewing fins were a classic wheel for the 80s. Richard Law’s A40 Celica running side-draft Mikunis also sits on them. Mike Nakawatase’s 240Z beside it doubles down on brown, the quintessential color of the era. 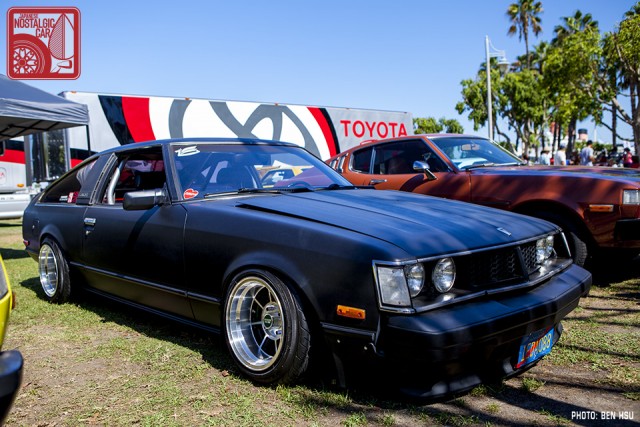 Isaias Barrios’ 1980 Celica has steadily improved each year we’ve seen it, resulting in slick RA42 liftback that’s edging ever so slightly towards the bosozoku end of the spectrum. With a set of sexy Hayashi Streets and subtle aero mods taken from a big brother Celica Supra, we admire the love shown towards a body style that really gets no respect whatsoever. Trust me, I should know. 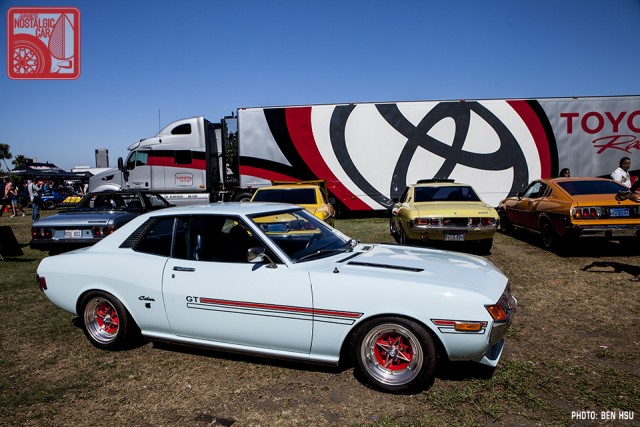 Another familiar vision to long-time readers is the sight of a beautiful Scandinavian Sky Celica. Celicas are always cool, but again, it’s the perfect combination of body color, red stripe, and red Techno Phantoms that make this car more than the sum of its parts. 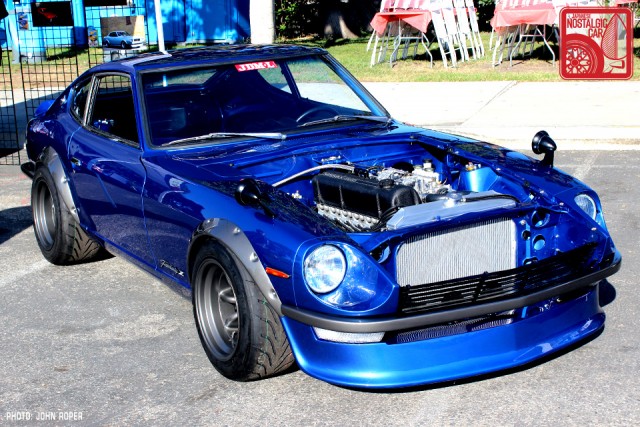 JDM Legends came all the way from Utah to show a Datsun 240Z that’s been recently brought back from a bare, well patina’ed shell. Looking like the Devil Z from Wangan Midnight, it is being built for a customer and is thus not for sale (sorry). 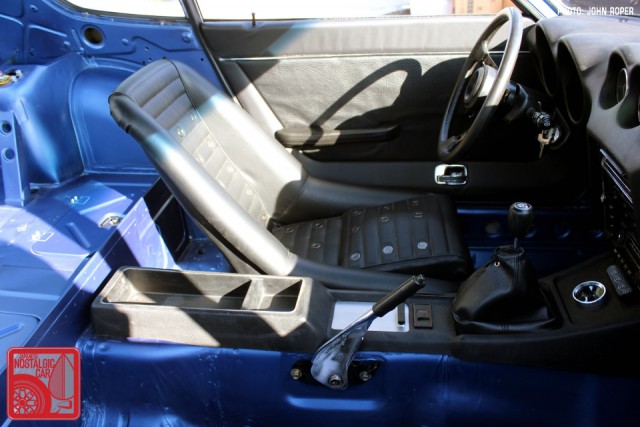 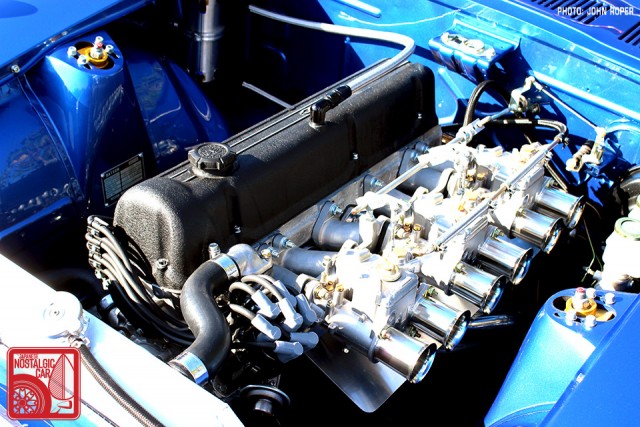 Inside, the panels aren’t all quite in, but the classic racing bucket, not to mention a beautifully purposeful L-gata side-draft setup provides some indication of the direction JDM Legends is going with it. There are some photos of the build process on the JDM Legends blog. 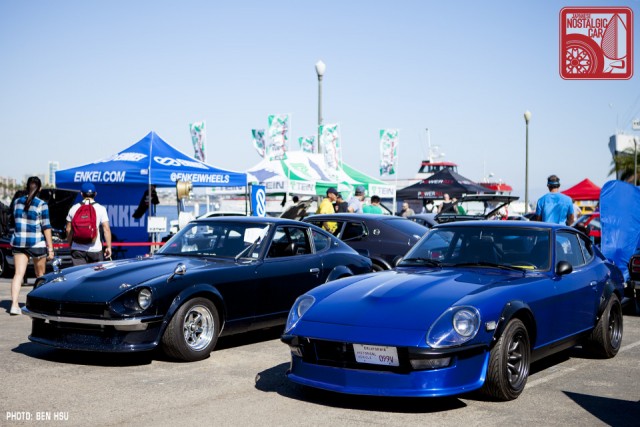 Actually, there there were a few more contenders for the title of Devil Z this year. Watanabes or Longchamps? Standard nose or G-nose? Cool fender mirrors or uninterrupted hood lines? It’s impossible to decide! 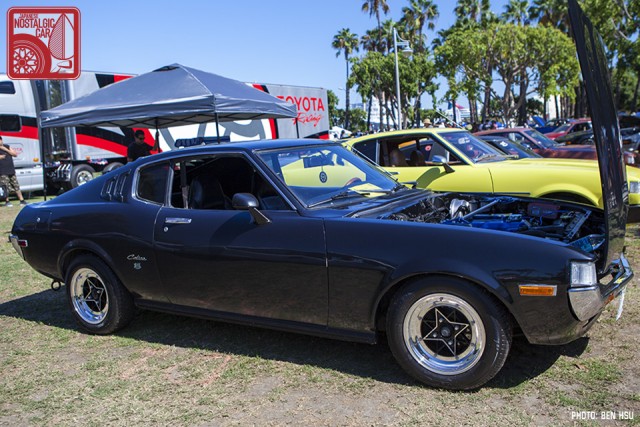 Julian Segara’s 1977 Celica Liftback may not be entirely slammed on its SSR Star Sharks, but that’s okay. It looked like a 1970s Tokyo street machine. 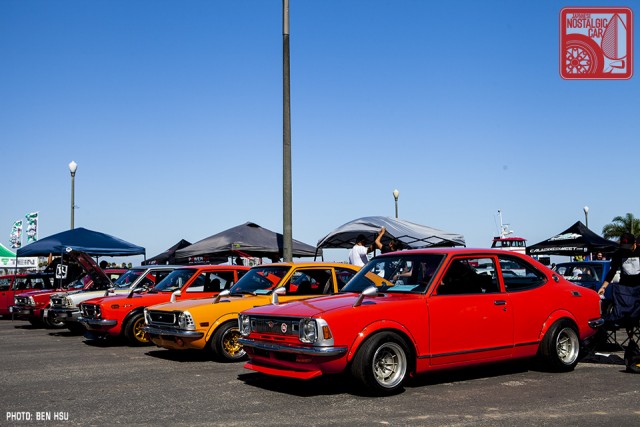 In the Corolla section we found a rare gathering of brightly colored mangos all in a row, starting with the Ramon de la Cruz’s 3S-G-powered Corolla coupe in proper street fighter attire — front splitter and 13-inch TOSCOs. 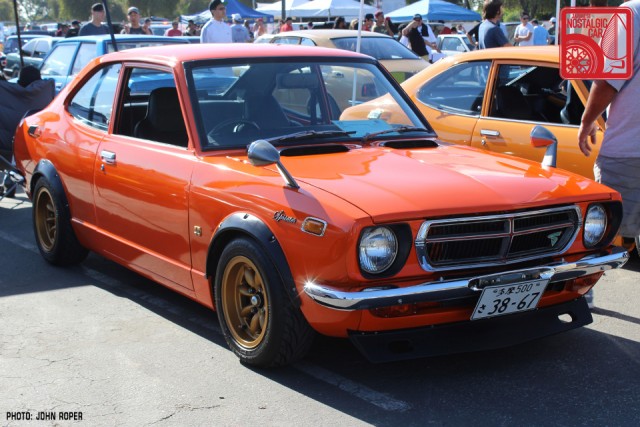 Wedged in the middle was a rare RHD zenki Sprinter Trueno with the cross-hair grille. We saw this car at Toyotafest earlier this year, but now its wheels have been changed to painted 8-spokes. 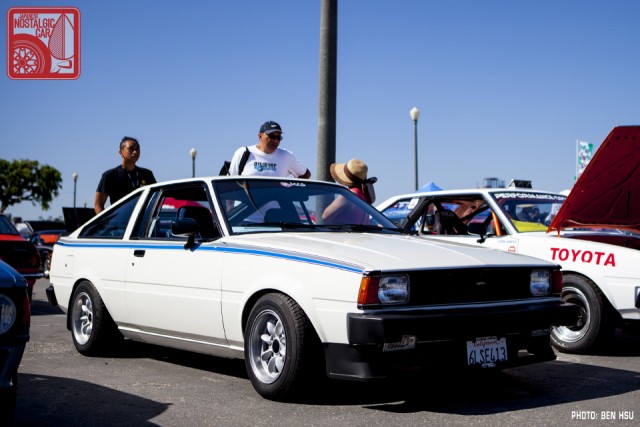 While some of these Corollas are built in old school Filipino style, like Mario Trinidad’s 1980 TE72 with its Foha lip and rear spoiler and 13-inch Panasports, you can still easily imagine it sliding tail-out with the best of them in the Hakone hills circa 1989. 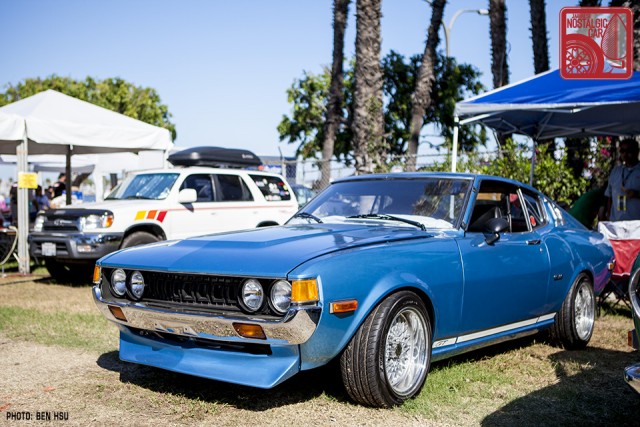 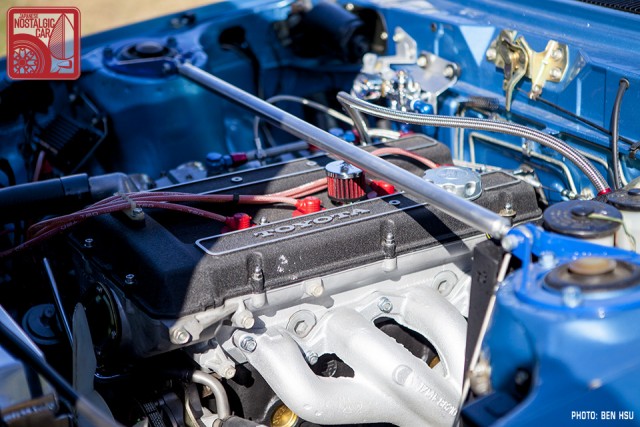 Jeff Yee’s Celica Liftback is another familiar friend but this time it was freshly fitted with an 18R-G. The cleanliness of a just-installed engine is a work of art for clean freaks. Just glance at how spotless the valve covers and exhaust manifold are and you’ll want to break out the degreaser on your own ride. 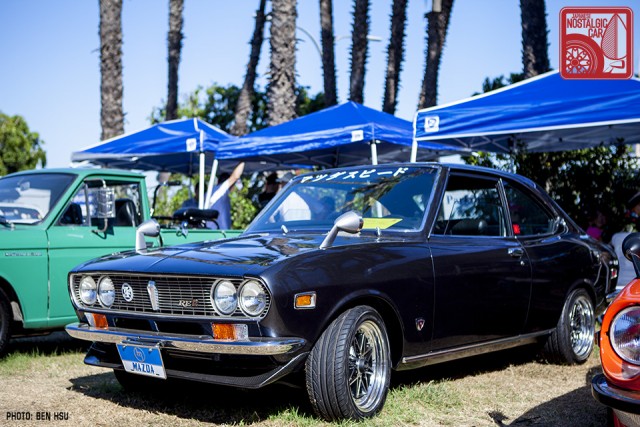 Jeff Chung’s 1973 Mazda RX-2 coupe looks mean on its 15-inch Work Equip 03s. Though parts like his custom front spoiler are carbon fiber, the fact that the car is black hides it well enough that you don’t notice. A bridge-ported 13B fed by a Dell’Orto lies under the hood, and the old school Mazda blue and white license plate is a great touch. 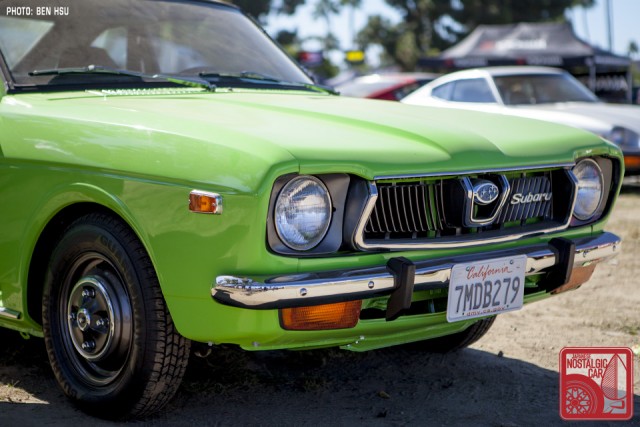 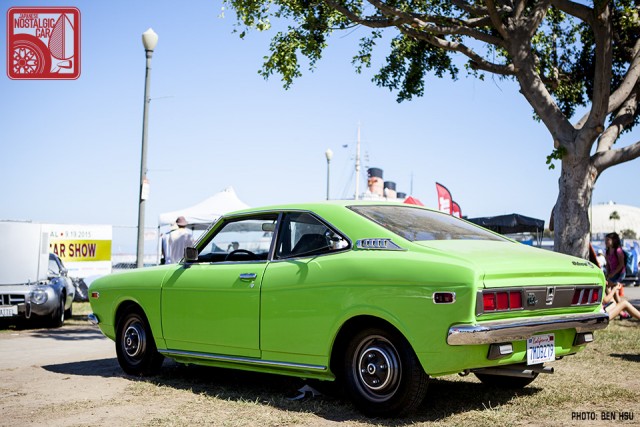 One car that caught the eye of every JNC staffer at the show was Mark Nakashima’s 1973 Subaru GL coupe. Mark had just completed a six-year rotisserie restoration, a task that’s hard enough on any car, never mind something as rare as the GL. 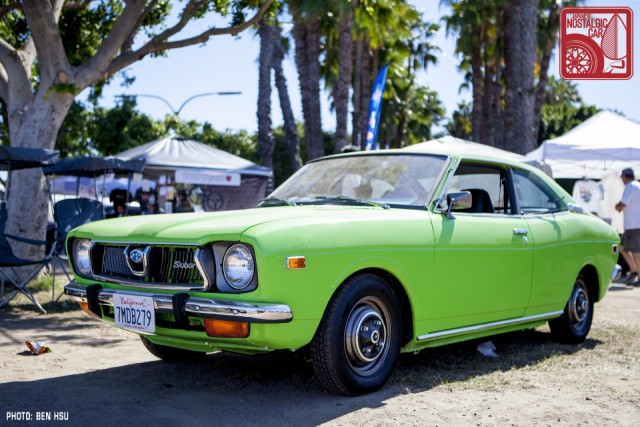 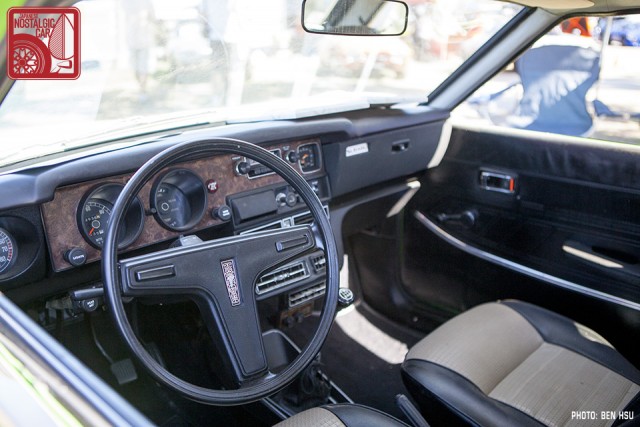 Subarus are typically under-represented at JCCS, but never has one this rare appeared. In the 11 years the show has taken place, this is the first time a GL coupe has ever been displayed on the Queen Mary lawn. Many casual spectators simply walked by without much of a glance, probably suspecting it to be a old Datsun B210 or something, but proper acknowledgement has to be given to Mark for taking on such a difficult project. 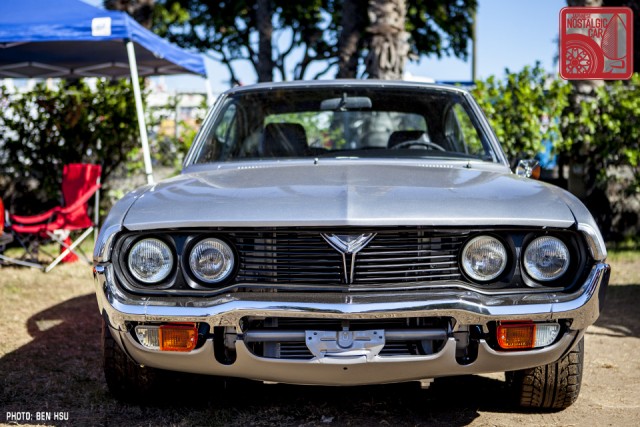 Speaking of rare, if obscure old rotaries are your jam, you really can’t beat Ken Bone’s 1974 Mazda RX-4. It was truly one of the breakout stars of this year’s show, a multi-year restoration job that was finished just hours before the show. 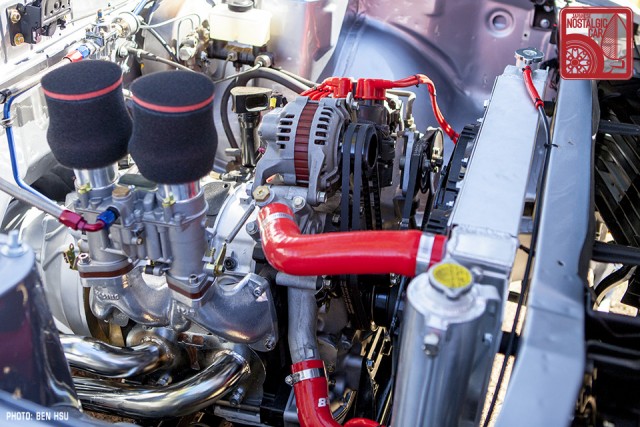 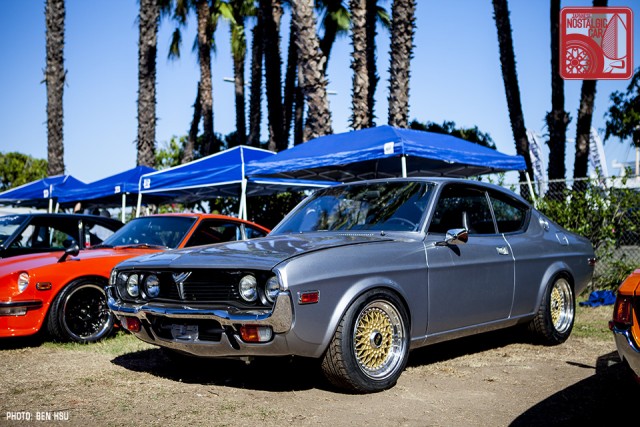 There’s just something that looks so cool about a down-draft carb-fed 13B under the hood, especially for a car as large and mean-looking as the RX-4. Most innocent bystanders probably expect a V8. Instead, they find a compact but powerful little rotary with tons of empty space but packing plenty of punch. 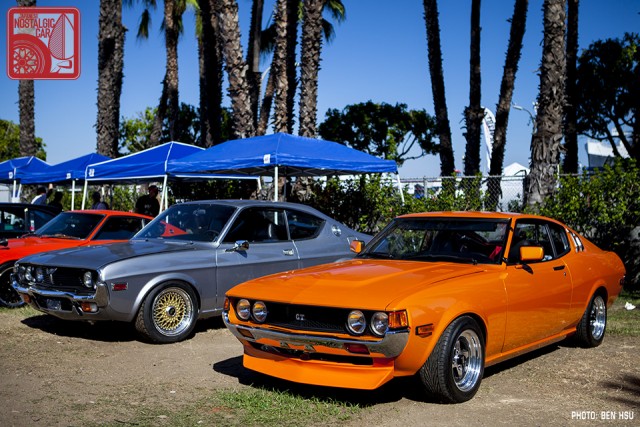 Brian Karasawa’s 1977 Celica Liftback is another JCCS stalwart. Sitting on Hayashis, it was one of the first new school JCCS builds to go old school in style. If you want more information on it, you can watch this video. We just wanted an excuse to post this badass photo of Toyota and Mazda’s mid-70s sport coupes in a rare joint appearance. And that’s what the JCCS is really all about — celebrating all the various marques from Japan and letting fans of one discover the other.

We’ll have more 2015 JCCS coverage coming up, but in the meantime in case you missed it here’s Part 01, as well as special features on the Ibarra Bros’ classic Mazda collection and the first Honda built for US import.