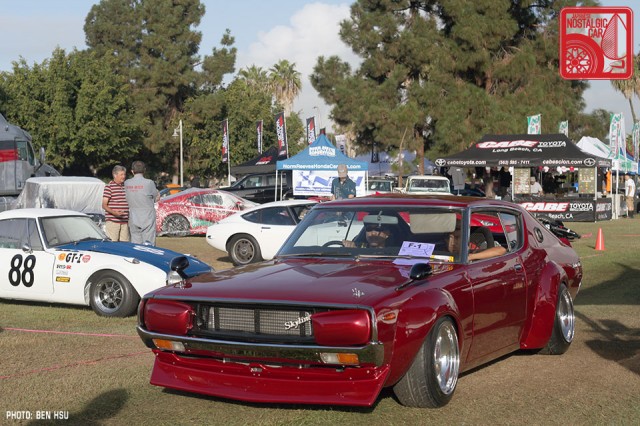 With the Japanese Classic Car Show now officially 10 years old, it has become an event where people will wait to debut a build they’ve been working on in secrecy for years. Here are some of the best examples of cars that have either never before been seen or have been significantly reworked for a JCCS debut. 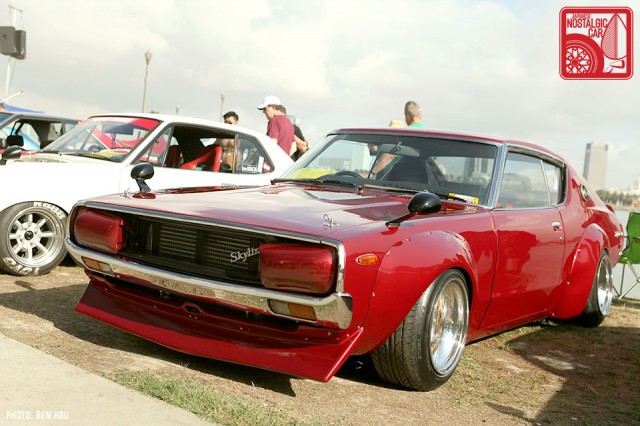 One of the most stunning first appearances was Patrick Soliman’s 1973 Nissan Skyline, probably the most faithful application of zokusha style we’ve seen outside of Japan. Rolling into position in the morning, it looked like it had emerged for a sunrise cruise straight outta Chiba.

From the racing jacket to the works style widebody covering 12-inch-wide Techno Phantoms, the car is steeped in speed tribe culture. 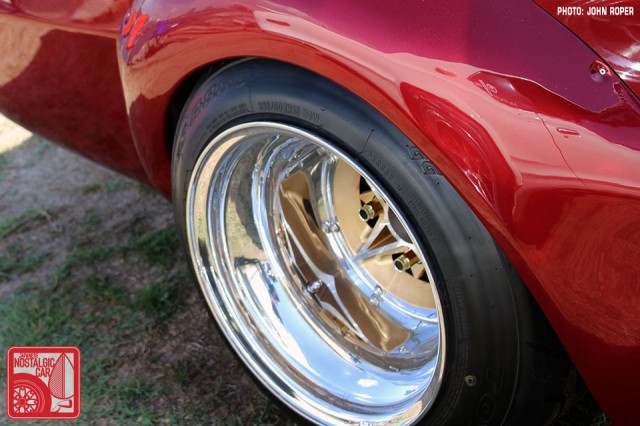 Patrick’s kenmeri isn’t just for show, though. Under the hood lies an RB26DETT mated to a similar era Nissan 5-speed by way of an OS Giken clutch. A Precision Turbo 6262 with ceramic ball bearings and the standard R200 limited-slip diff round out the package.

Perhaps the most astonishing thing about the car is that underneath the candy apple paint job is the infamous Curry House Skyline. It was one vote away from winning the JNC award, but another car that could not be more different in style (to be revealed in a later installment) clinched it. 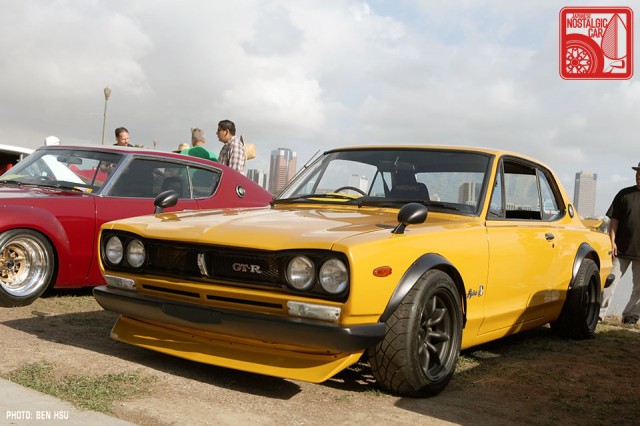 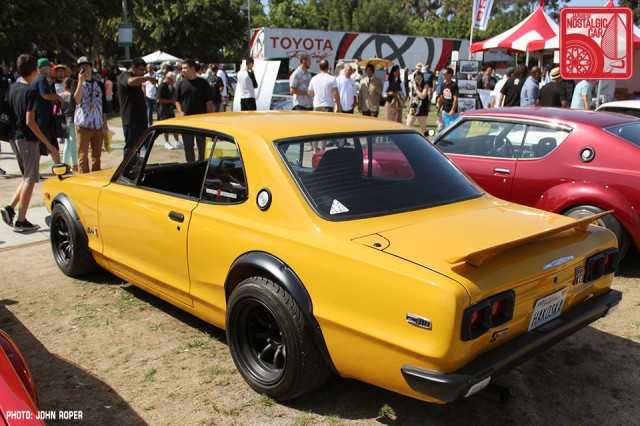 Another Skyline that has undergone a transformation is Marco Vargas’s 1972 Nissan Skyline. We snapped a quick pic of this very car seven years ago, when it was dark blue. Since then it has been repainted in the dark yellow color reminiscent of later GT-X models. Blacked out chrome bits and high-profile tires give it a pro-street muscle car look as opposed to tasteful classic. 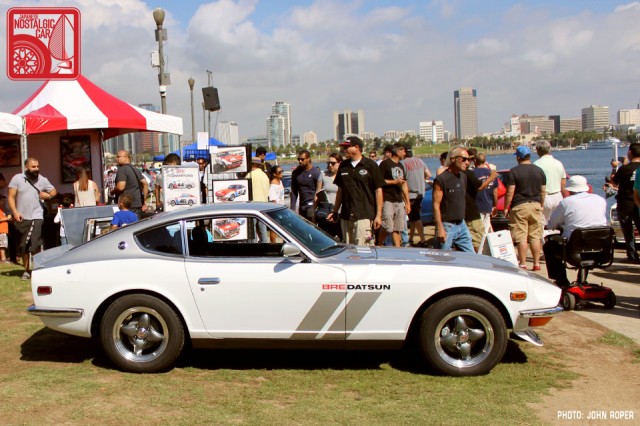 One of the more significant debuts was a 1971 Datsun 240Z tribute car unveiled by Peter Brock himself.  The BRE race team founder purchased it from the family of its original owner in April 2013. From there, the car was completely disassembled, media blasted, and every nut and bolt re-plated.

The engine was blueprinted, rebuilt and over-bored by .030 inches and everything else was freshened in some manner. The car, originally orange, was then re-painted in Toyota Super White and two-toned in silver with Brock’s trademark BRE stripes on front fender.

The car serves as a rolling showcase of the parts Brock designed to help him win two SCCA C Production class titles back in the early 1970s. The most recognizable pieces are the front air dam, also known as a BRE spook, and the rear spoiler used on the 1970 cars. BRE-designed aero side view mirrors and “Le Mans” wheels that pay homage to the original American Racing Libres finish out the continuation of a legacy born 44 years ago. 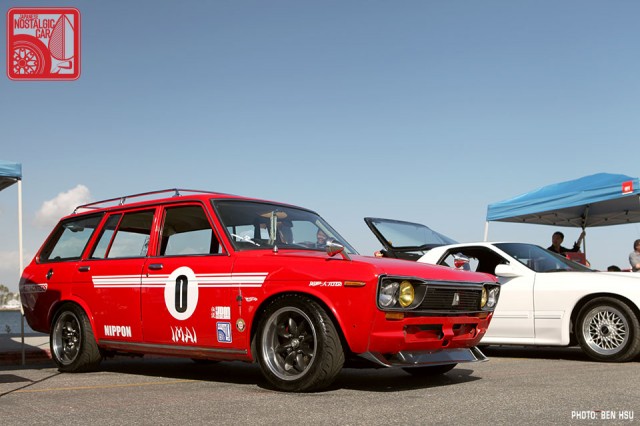 John Williams’s red Datsun 510 is a regular at JCCS and many other shows, but this year he’s traded in his Radio Flyer and tiki theme for a 1:1 scale replica of the Hot Wheels Datsun 510 wagon that came out earlier this year. Not only did he make a replica of the JNC inkan that graces the Hot Wheels, he converted to a JDM Bluebird grille, added a front spoiler and removed his bumpers to bring it in line with the toy. 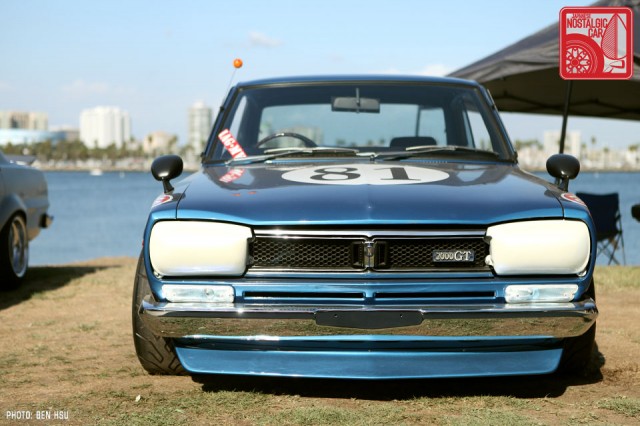 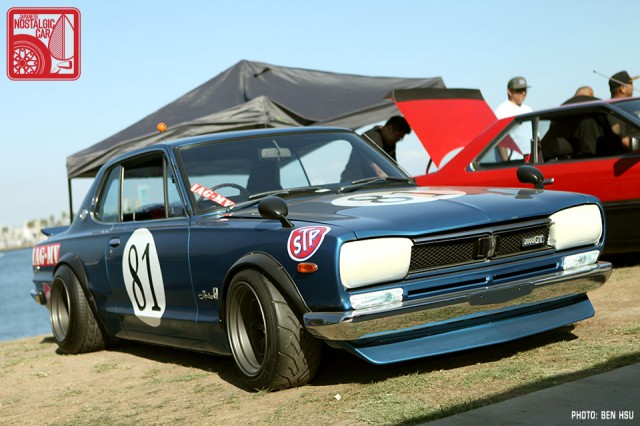 Those who attended JCCS last year may remember a blue Skyline GT-X that looked a bit awkward on white wheels. Eric Khamchan bought it, and transformed it into this mean, touring car-inspired hakosuka. Deep gunmetal Wats and a contrasting racing jacket for the headlights make it extra eye-catching. 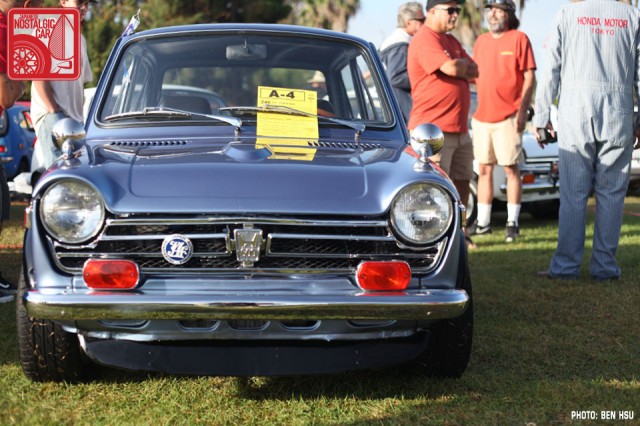 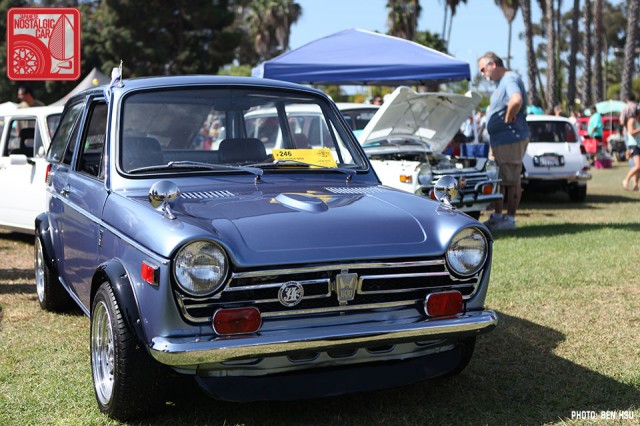 This year had a staggering number of Hondas present, but one that stood way out was Rusty Smith’s 1971 N600. Most N-Series owners elect to keep their kei-sized cars stock, but Rusty has incorporated a bunch of old school zokusha styling cues to set it apart — fender mirrors, bolt-on flares, and a sweet set of Hayashi Command 500s. 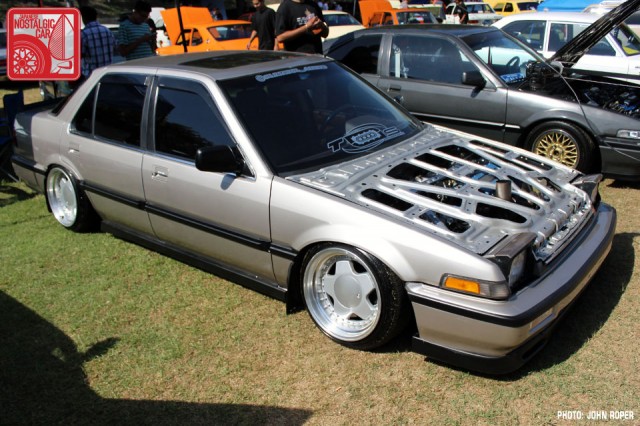 On the complete opposite end of the custom Honda spectrum was Adan Reyes’ CA1 Accord sedan. Stanced hipster Honda heads are always coming up novel ways to show off their engine bays, and a hood stripped of its outer sheetmetal is certainly a first for JCCS. While stanced cars are controversial, doing it to a bread and butter sedan is a much better choice, least more original and less cringe-inducing, than when it’s done to, say, an S2000. 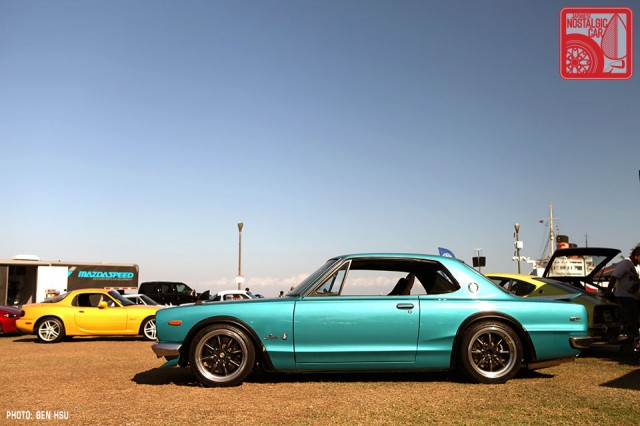 This hakosuka is absolutely gorgeous, and the SR20 swap done by Vildini Motorsports is flawless. However, it used to be one of the cleanest, most original Skyline GT-X specimens we’ve ever seen, and in a rare light blue color too. For a while, it was on display in the showroom of Universal City Nissan, right along one of Los Angeles’s busiest thoroughfares for all to see. 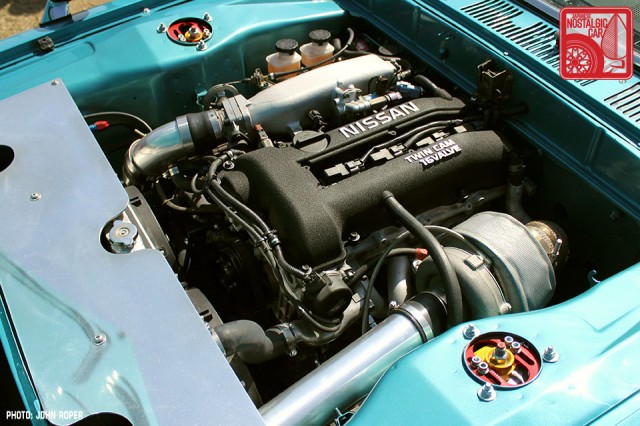 Now it’s another GT-R clone. A very well done clone, but a clone nonetheless. Slicing into those mint rear wheel arches must have been an especially gruesome sight. If the donor car had been less pristine, we’d love it wholeheartedly. 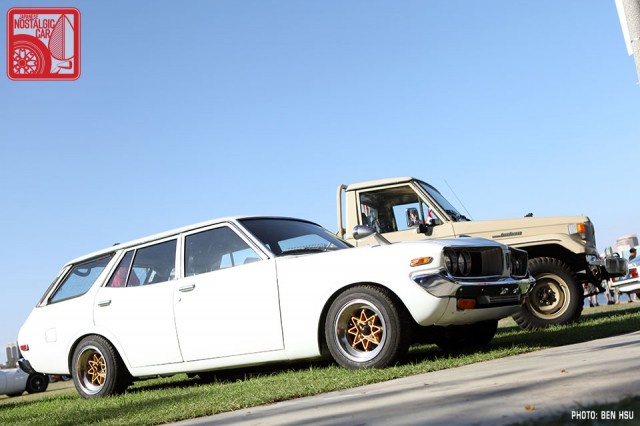 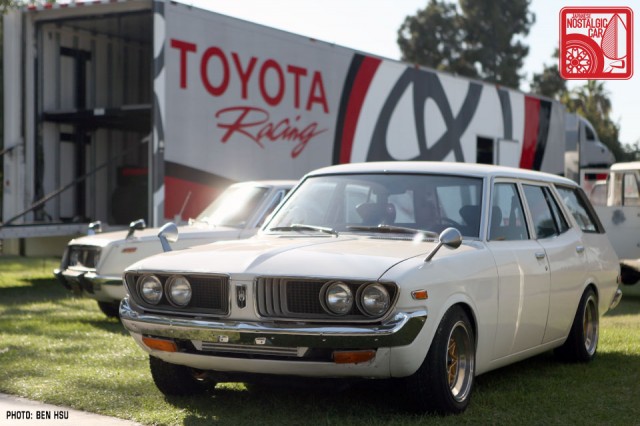 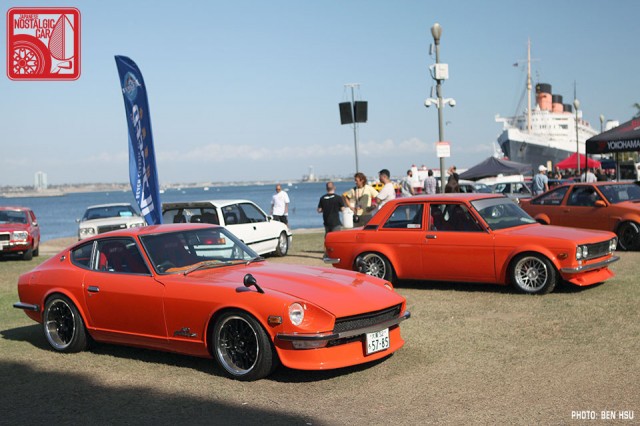 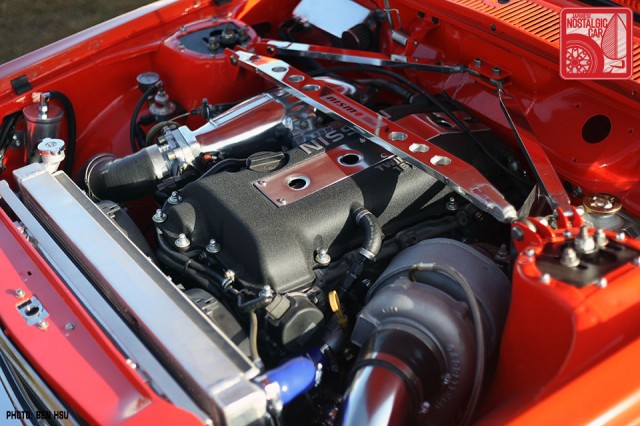 Kelvin Hiraishi’s S30 Fairlady Z and his brother Jeffrey’s Datsun 510 may look familiar to long-time JNC readers, but the news here is that Kelvin has since completely reworked the 510, gutting it of its rotary engine. Now in its place is at turbo SR20 sitting above a hybrid MR2 and 240SX steering rack. The installation looks factory perfect. 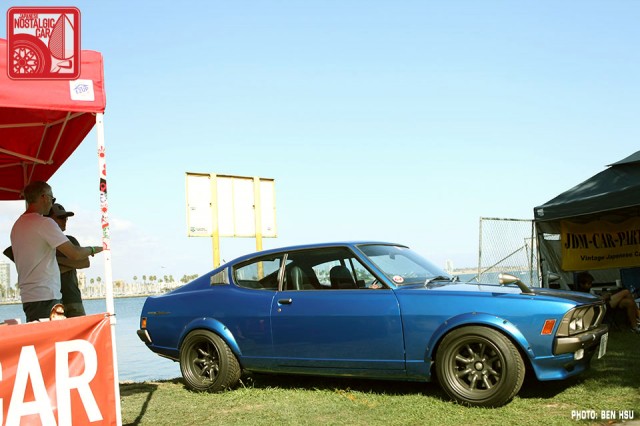 Last but not least, we had mentioned that JNC would have at our booth an iconic Japanese car that had never been shown before at JCCS. Here it is, our forum moderator Matt’s freshly restored Mitsubishi Colt Galant GTO GS-R.

The GTO (Gran Turismo Omologato) was a low roofline, ducktailed variant based on the New Galant (aka Dodge Colt in the States) which debuted at the 1969 Tokyo Motor Show.

Matt’s car is a limited production R-spec equipped with factory wheel flares and front spoiler. The original 2.0 Astron motor was replaced with a 2.6 version to which Mikuni-Solex sidedraft carbs were bolted to. Appropriately, the car sits on Watanabe Type R wheels.

This GS-R is the result of a long, multi-year restoration. If you think parts for your Celica are hard to find, try trim for a 40-year-old Mitsu. Matt wants us to give shoutouts to Dave L, John R, Mikey C, James D & Mark D. for all their valuable help. These pictures simply do not do the car justice, so we’ll try to get John to do a proper photo shoot in the next few months.

The kyusha gods really did smile upon on us this JCCS, as were pleasantly surprised to be joined by a second GTO, which we’ll cover in a subsequent installment of our JCCS coverage. Stay tuned.