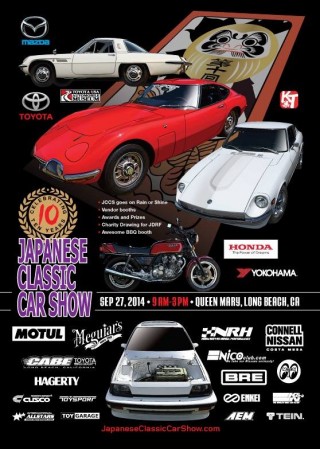 The 2014 Japanese Classic Car Show opens for registration today, July 1. This will be a landmark year because it will be the 10th annual JCCS.

That’s right. It’s hard to believe, but the show that paved the way for nostalgic car gatherings of all sorts has been going strong for an entire decade now. The organizers, Koji and Terry Yamaguchi, tell us they have something special planned in honor of this special occasion.

In addition to the cars and motorcycles that have been eligible in previous years, the first-gen Mazda Miata is now a classic and thus welcome at the show.

Special guests will include designer and BRE founder Peter Brock, as well as race car driver John Morton. JNC will also be there with a very special car never before seen at JCCS, so stop by our booth and take a peek.

This year, Toyotafest registration filled up in a record four days. Don’t miss this rare opportunity to display your car or bike on the lawn at Queen Mary Park in a banner year for Japanese nostalgics. You can register at the JCCS website.