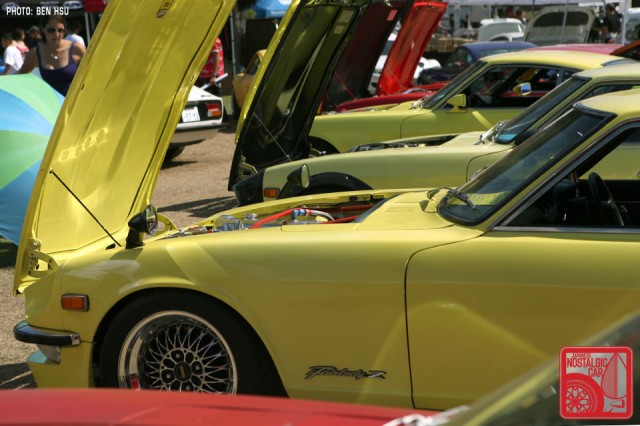 This year the Japanese Classic Car Show began screening entrants. A JNC editorial on the development generated heated debate, with many assuming that the Queen Mary lawn would be filled with identical, bone stock examples that all looked the same. Turns out, that concern was completely unfounded, because you couldn’t swing a cat-less exhaust without hitting a modified machine at the show. 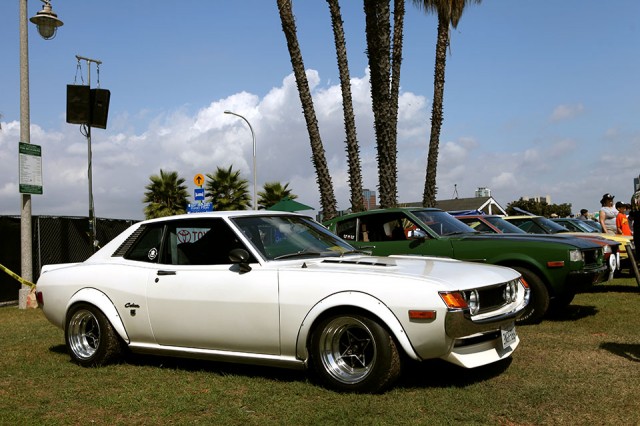 One of the most iconic Japanese sport coupes is the first-gen Toyota Celica, and Irwin Aquino’s ’72 is is a great mix of Japanese and US styles. The stance, flares and SSR Star Sharks say JDM, but under the hood there are plenty of American-style mods like an 18R-G with lots of built internals and a Toysport header fed by Weber DCOE carbs. It’s one of our favorite darumas.

It wouldn’t be JCCS without Brian Karasawa’s orange Liftback and Paul Matsushima’s blue Celica coupe. These regulars have flawless builds, and what makes a show like JCCS worth going to.

On the opposite end of the spectrum is Peter Vong’s 1977 RA24. There hasn’t been on part on this Celica left untouched, least of all the motor, which has been replaced with a Honda S2000 F22C breathing through ITBs. The rest of it has been slathered in Midnight Purple paint and the cabin upholstered in black suede. Everything sits on a custom air suspension and 3-piece BBSes finished in something called Black Solar Rain. If it looks like something that might be more fitting for a new school show like SpoCom, that’s because it is, where we first saw it. It’s an admirable amount of work, and we’re actually quite happy to see it done to a square-bumpered first-gen Celica.

Dexter Rojas’ Dodge Colt, a captive import second-gen Mitsubishi Galant, was another rare member of the triple diamond clan in addition to the two Galant GTOs we already saw.

Funny story: The day before JCCS on the way back from a T-shirt run, we actually saw the owner on the side of the road with a Galant GT Coupe. We pulled over to see if we could help out a fellow JNC driver and learned that a mechanic had installed a belt crookedly, bending a pulley and rendering the car undriveable. He was understandably upset, but perhaps even more so that he would miss the show. We texted Terry Yamaguchi, one of the organizers, and asked if he could bring his four-door instead. A few minutes later she responded yes, he was good to go. A tow truck picked up the car, and we left. It was good to see that he made it the next day, parked just a few cars down from our booth! 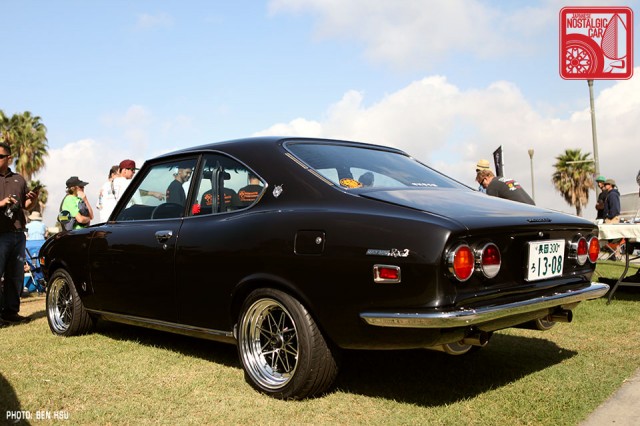 Kelvin Chung’s 1973 Mazda RX-2 was a big award winner. Though modified with a bridge-ported 13B, coilovers and discs at all four of his 15×8 Work Equip 03s, the overall look is of one that’s mostly clean and original. It’s no wonder Kelvin won the Best Classic Mazda award. 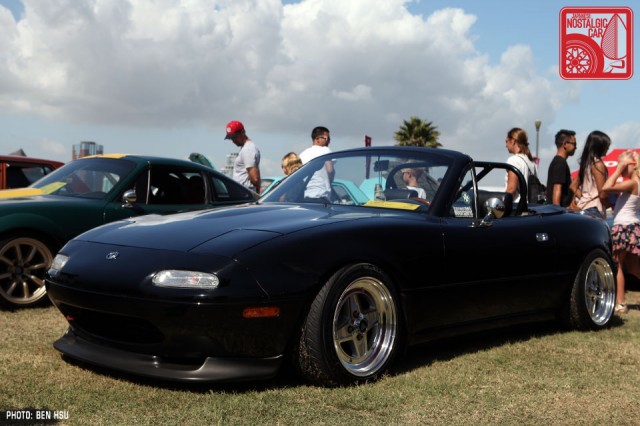 Speaking of black Mazdas, this was the first year the Miata was eligible for JCCS. Since it was introduced in 1989, any model from the first generation is allowed. Michael Fleming’s 1996 is a stunning example of a clean vintage roadster-inspired build, with spoilers by Garage Vary in front and KG Works out back, Racing Beat headers, a wooden Nardi and a Nakamae interior. For his efforts, Michael took home the Best Miata award. 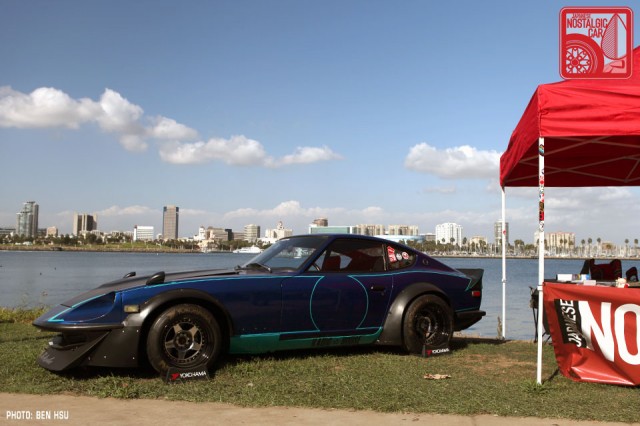 In addition to Matt’s GTO, we had a second car at the JNC booth, Hot Wheels designer Jun Imai‘s Datsun 260Z, slightly modified since it was last shown at JCCS. The bosozoku-inspired S30 now sports a G-nose and Leyton House-inspired graphics. Look for an in-depth story on this car soon.

As you might expect, S30 Datsun Z-Cars were well represented at JCCS, from early 240Zs to big-bumpered 260Z and 280Zs. Several Japanese-market Fairlady Zs made it over as well. From 80s-style boulevard cruisers to flared out racers, the Zs covered every type of modification. 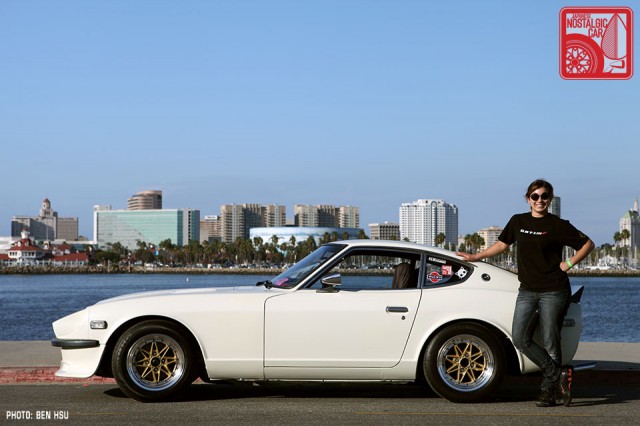 Jill White’s Datsun 240Z is a great example of a clean, street modified car you might find bombing around the outer prefectures, but what’s perhaps more impressive is the fact that she bought it in non-running condition, learned how to wrench while swapping an engine and manual transmission, and brought it back to life to show at JCCS. Gold Work Equip 03s provide a good match to the off-white and there’s a pink tsurikawa hanging off the rear. 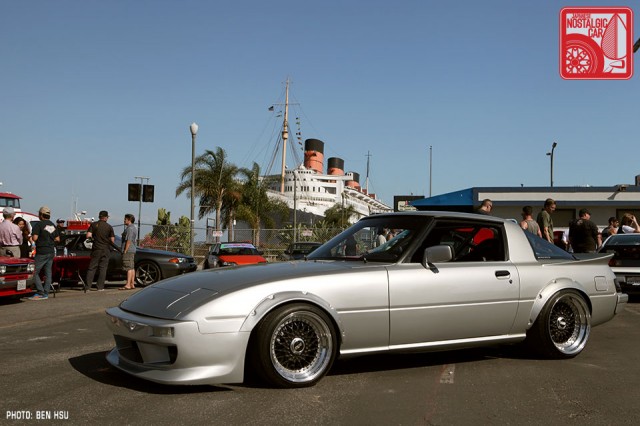 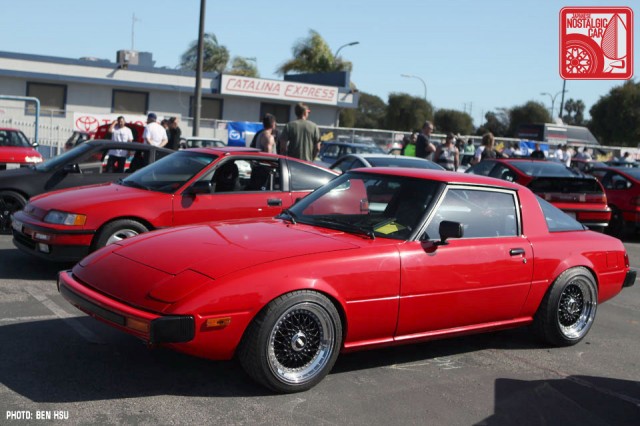 The only Japanese sports car from the era that reached the S30 Z-like popularity was the first-gen Mazda RX-7. Representation of the rotary rockets were down a bit this year compared to previous JCCSes, but we did find a very clean red SA22 and a silver IMSA-kitted example, both rocking BBS wheels. 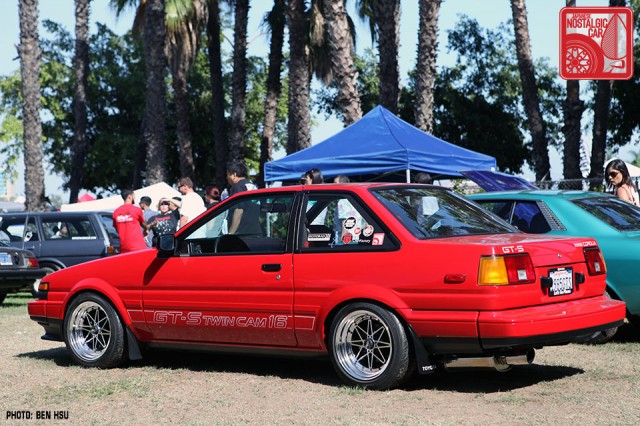 Traditional Japanese sport coupes and sedans rely on lightness and agility, not sheer power, to reel the enthusiast in. No matter how small or economically designed the car, people found a way to modify and enjoy them. Corollas are the perfect example of this — considered as grocery getters by the majority of the populace, but those in the know understand how much fun can be had behind the wheel.

Toyota’s humble compact was well represented in a myriad of body styles and generations, from Mario Trinidad’s beautiful E70 Sport Coupe on Panasports to Riley Crone’s rare 1969 KE10 with a silvertop 4A-G swap. 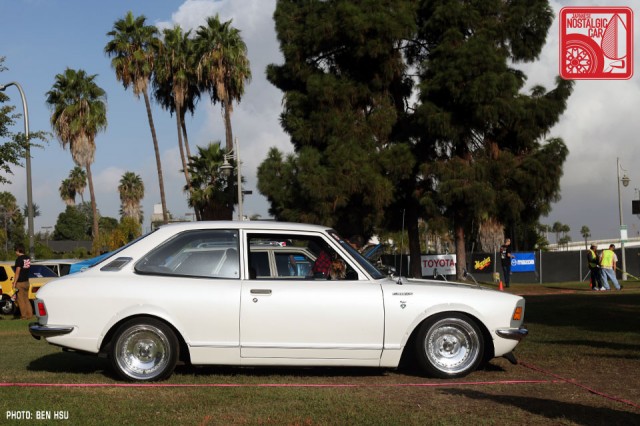 Henry Mendez’s 1971 TE21 was displayed prominently and powered by a cammed and bored 3T-C fed by Mikuni sidedrafts. The stock transmission was swapped with a 5-speed manual and Tein AE86 coilovers drop the front pretty severely. 15×9 Centerlines polished to a blinding gleam are not for the shy.

Moving further down the budget scale, we find the Toyota Starlet, a hot hatch the size of the original VW Golf, but rear wheel drive. 4A-GE Swaps from the original K-series motors are common, as we saw on an excellent tan specimen with SSR MkIIs. Ethan Burroughs’ went a slightly different route with a turbo 3T-C and came all the way from Oregon.

In past years, Toyotas dominated the modified economy car segment at shows like JCCS, but this time around Nissan Sunnys came to the forefront with several modified examples. Javier Jiminez went with a CA18DET swap in his 1974 B210 hatchback, while Ron Sino-Cruz decided to go with an American bosozoku interpretation for his 1978 two-door sedan. 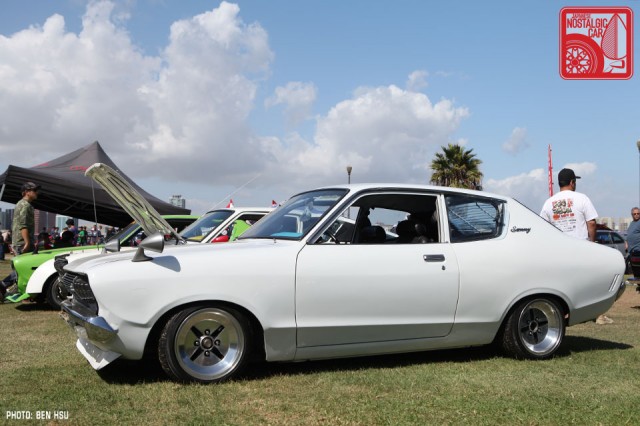 Among our favorites was Enrique Elias’s 1978 B210 2-door sedan, which took inspiration from Japan and looked phenomenal sitting on Work Equip 02s. 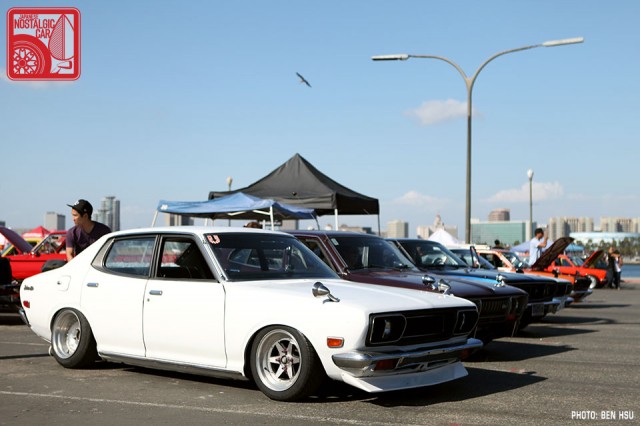 Come to think of it, the B210 2-door sedan’s roofline looks quite similar to the that of the Datsun 610. We’re glad to see more of them enter the ranks at JCCS. With a tsurikawa hanging off the rear and mismatched SSR MkI/Longchamp XR-4s, this particular example exuded a budget zokusha vibe.

Last but not least, we have the Bluebirds. The Datsun 510 was probably the best example of a car breaking free from its economy origins to become a sought-after enthusiast’s dream. No other car except maybe the Z spawns as many builds. The car has really become a blank canvas for anything the imagination can conjure. However, as a result very few 510s end up looking like classics. Perhaps the fate of the 510 is to be the JNC scene’s counterpart to a ’32 Ford, all hot rodded and modernized.

Chuck Tomasello’s 1969 probably looked the most classic, finished in its original Kasumi Green and riding on Hayashi Perrier mesh wheels. The engine wasn’t original, but a single-cam carbureted NAPZ 2.4 with a valve cover painted in simple black looks the part. 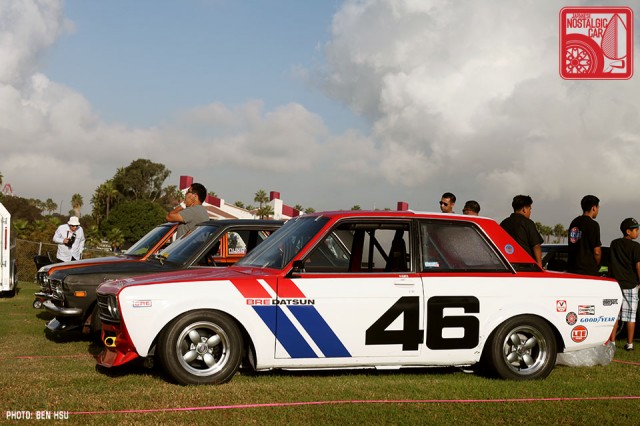 Of course, there will always be well done replicas of John Morton’s BRE racer and that’s about as classic as you can get.