If there was a single concept car that summed up the optimism 1980s and the upcoming digital revolution, it would have to be the relatively unknown Subaru BLT concept of 1987. As you may have guessed, it didn’t stand for Bacon, Lettuce and Tomato, but rather the somehow even more bizarre Business and Leisure Transport. Introduced at the 1987 Tokyo Motor Show, the BLT imagined the perfect vehicle for the working professional, and served as a rolling office for the high-powered businessperson. 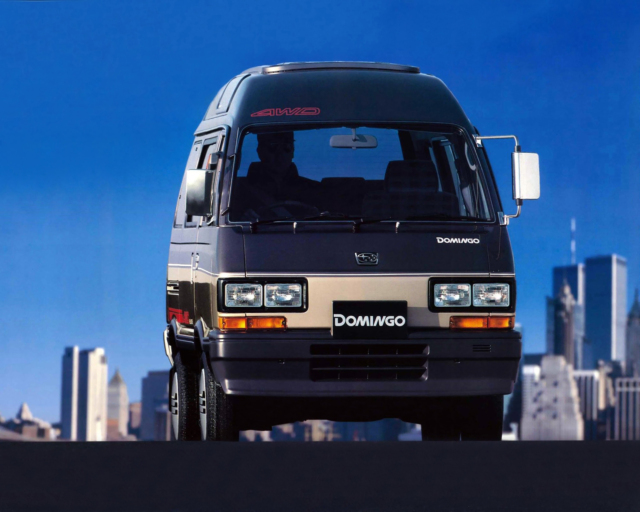 The BLT was based largely off of the existing Subaru Domingo platform, a microvan that measured about 10 inches longer and had a larger engine than the kei-sized Subaru Sambar. It weighed 2,226 pounds, as much as a contemporary Honda Civic, and was powered by a 100-horsepower 1.2-liter turbocharged inline-3 mated to a CVT. It had full-time four-wheel-drive for power delivery and, of course, four-wheel steering. Relative to other vans of the era it would have been a reasonable performer, as the Volkswagen Vanagon made similar power out of a 2.1-liter flat-four and weighed almost double the mass at 4,400 pounds in camper form. 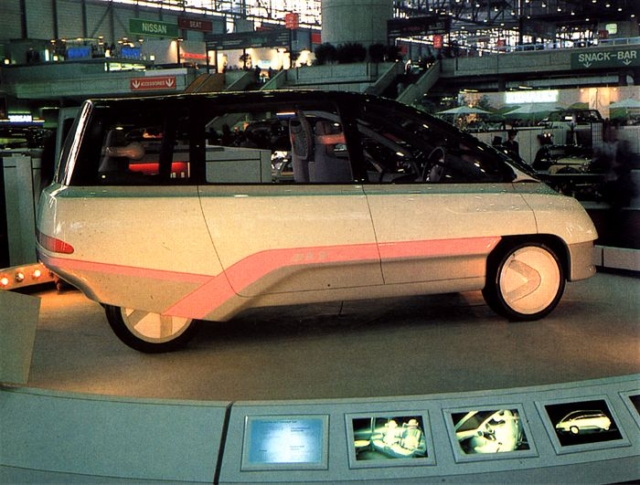 On the outside, the car was a massive departure from Subaru’s boxy designs of the period, which typically could have been replicated exactly and in full resolution by a Commodore 64. Additionally, the BLT was clad in one of the best and most 80s tri-tone color schemes imaginable — white, gray, and pastel pink. Its design language, with its flowing, organic lines that first appeared on the company’s F-9X concept of 1985, would become all the rage in the 1990s. 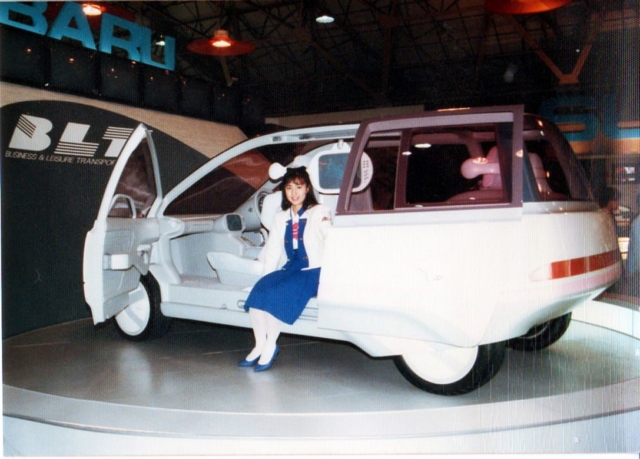 To me, the rear quarter looks properly good with the body line tapering down toward the rear wheels and their unorthodox well shape. Also, pay heed to the low-profile tires more befitting of high-performance machines. Subaru packed the BLT with under-appreciated 1980s design cues, such as split opening windows, a single taillight bar, and expansive greenhouse. Its design language would later manifest itself in the Subaru’s SVX, and in fact looked like what the SVX would’ve been if it were a van.

The most groundbreaking aspect of the Subaru BLT, however, was its built-in technology. The display at the center of the steering wheel was a unique design that featured a multi-color digital instrument panel, a feature that’s only starting to appear on new cars today. Next to the steering wheel sat a rudimentary GPS system, displayed through a CRT screen

Once through the pillarless sliding rear door, the BLT was designed to fit four people in utmost comfort. Each of the two rear passengers were treated to a built-in personal computer, whose monitor hung from a track on the ceiling, controls were integrated throughout the cabin, and their guts stored out of sight.

Armrests boasted controls for the computers. A pull-out table featured molded indentations for cups and common office supplies. The seats included integrated headsets and made arguably the best use of pastels ever seen in a concept vehicle.

The notion of an in-car computer was the stuff of science fiction, especially at a time when laptops were still rare and expensive. A typical car “computer” of the era could execute only the simplest of tasks, like calculating fuel range. A completely functional PC with a word processor was unheard of. Furthermore, the screen was not a cathode ray tube, but the kind of high-end LCD flat display that wouldn’t become commonplace until the following century. 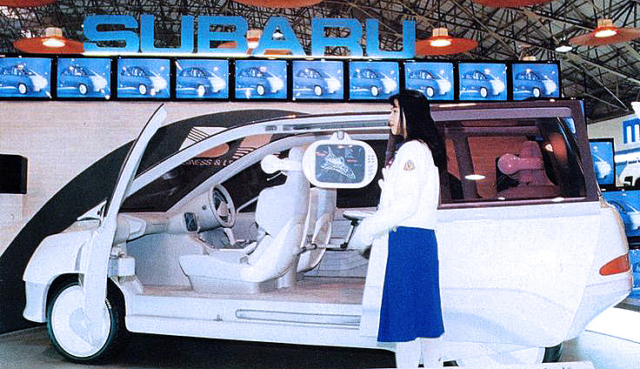 In the two years following its debut, the Subaru BLT made its way around the world on the car show circuit. When displayed in Australia the following year, it was hailed by local news outlets as “the most advanced car at the 1988 Sydney motor show.” It even made headlines at the Chicago Auto Show the following year in 1989, where it was one of only a handful of concepts (the others being the Pontiac Stinger and little known Dodge called the Viper).

Unfortunately the Subaru BLT disappeared after the turn of the decade. It’s a shame, really, because although some of its tech would eventually come into production later in the 90s, the car was decades ahead of its time. On the bright side, maybe that was a good thing because it’s easy to imagine one in rough shape towards the end of its life (like 95 percent of Toyota Previas seen on the street), and built-in technology tends to age pretty quickly. The Subaru BLT, however, will always be remembered in all its shining, Motor Show glory.