VIDEO: The 1985 Honda Civic Wagon was the first crossover 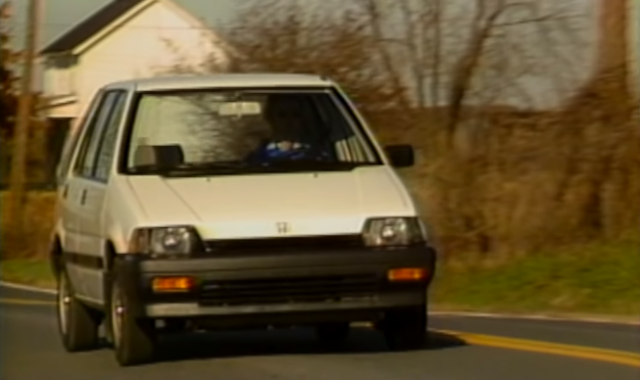 Today’s market isn’t particularly kind to small cars, or cars in general, as the would-be small cars on stilts we know as crossovers dominate the sales charts. There was a time in 1985, however, when you could buy a literal crossover, a perfect pairing of utility, tossable driving dynamics, and fuel economy. Enter the third-generation Honda Civic five-door Wagon.

Motorweek’s first impression of the Civic Wagon was that it was “styled more like an aerodynamic refrigerator than a car.” That was, until they opened the rear hatch and found it to be more like a commercial grade walk-in freezer. $7,195 bought you a Civic with a cavernous, flat, tall, and wide cargo bay that allowed for ten different configurations, accommodating luggage of all shapes and sizes.

Moreover, every nook and cranny had a touch of Honda’s clever packaging and innovation — angle-adjustable and retractable headrests, under-seat storage trays, retractable center dash vent, hatch release button, and generous side pockets that could be filled with volumes of Rand McNally road atlases.

Its Civic DNA shined through while on the slalom, displaying a well-balanced poise which was described to be “almost sports car-like,” all while carrying a tall profile and greenhouse never before seen on a Civic.

Two transmissions were available, a three speed automatic, and a five speed manual. Motorweek‘s test car, with its 12-valve, 1.5-liter four generating 76 horses and 84 lb-ft of torque, resulted in a respectable-for-its-time 30 city, 34 highway mpg. Combined efforts yielded 32 mpg average, matching that of its tidy turning circle of 32 feet. For $1,505 more, you got 4WD with a push of a button, and an inch of ground clearance.

Honda got the crossover right the first time, back in 1985. In fact, the Civic Wagon led directly to the creation of an actual crossover a decade later, the Honda CR-V. It’s a direct lineage that is rarely talked about, but if you need proof, just look at the shape of the rear side window.

12 Responses to VIDEO: The 1985 Honda Civic Wagon was the first crossover