VIDEO: The Toyota Cressida was a magic carpet luxury subcompact 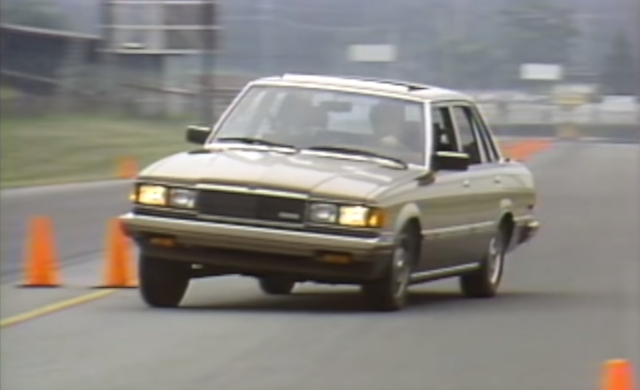 A lot has changed since the 1982 Toyota Cressida debuted. It’s a shocking amount, to be honest. Forty years ago Motorweek test drove the then-new second-generation Cressida, and we learned a lot from the review. For example, they state that in 1982 only 14 percent of Americans wore seat belts. Just 14 percent! Like, we know that this was a time when commercial airliners still had smoking sections, but that number still seems shockingly low. Also, the Cressida was apparently classified as a subcompact.

That subcompact classification was based on interior volume. That meant Toyota’s largest sedan played in the same leagues as a Chevy Chevette or Dodge Omni. In look and feel, it was more like a Ford Fairmont, a compact, though Motorweek notes that the Cressida measured about 10 inches shorter.

In reality, the Cressida was already playing Lexus’s game years before Toyota’s luxury brand existed. It offered a lot more standard features than the Big Three, with pricing slightly higher than domestics when fully loaded, but still coming in far cheaper than the Brits and Germans. For 1982 the Cressida started at $12,300, but Motorweek‘s tester, which came with leather, an AM/FM stereo with cassette player and equalizer, and electric sunroof, rang in at $14,700.

Of course, in 1982 the Cressida still had a solid axle rear with drums and a single-cam 5M-E inline-six. As Motorweek notes in a coda, the 1983 model year would have significantly upgraded the Cressida with an independent rear, 4-wheel disc brakes, and a twin-cam straight-six shared with the Celica Supra. That bumped horsepower from 116 to 143, a 23 percent increase.

The review briefly mentions the Cressida’s ability to absorb bumps, but it doesn’t convey just how much of a magic carpet this generation of Cressida is. Very little short of plowing it head first into a curb will upset the body. And even if jostled, the damping is so good it regains equilibrium in a single compression cycle so it never feels Boaty McBoatface like a similar era land yacht from Detroit. Only the hardest stabs of the brake pedal will dip the nose at all. The rest of the time, you’re just gazing over its serene prow as asphalt disappears beneath that squared-off hood.

Speaking of the square design, the Cressida of this generation really exemplified the boxy 80s look. Whereas the previous-gen X30 looked baroque, this X60 appeared crisp and modern. It still looks good today, and we would argue that it’s aged much better than contemporaries like the Chevy Citation, especially in this slick two-tone brown.

It epitomized Japanese luxury at the time, and it’s still an eerily comfortable cruiser today. The Cressida is a fantastic car. Everyone should drive one at least once.

7 Responses to VIDEO: The Toyota Cressida was a magic carpet luxury subcompact