The family that founded one of Japan’s largest department store chains was doing some spring cleaning recently and stumbled upon an entire car. Not just any car, but an impeccably preserved, one-owner 1982 Nissan Laurel Turbo Medalist Givenchy Version. What’s more, this example is likely the only one that Hubert de Givenchy himself, along with long-time Givenchy spokesperson, a little someone by the name of Audrey Hepburn, actually rode in. Now, it’s going back to Nissan. 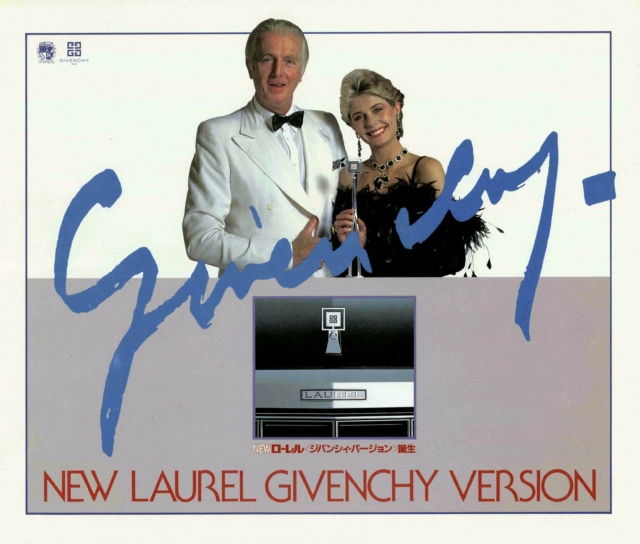 The Malaise Era was considered a dark era for cars, but it was a boom time for gratuitous car company and luxury brand collabs. There was the Gucci Cadillac Seville, the Oleg Cassini AMC Matador, the Pierre Cardin AMC Javelin, the Fila Ford Thunderbird, and more. Lincoln took it the farthest with a full-on Designer Series that roped in Bill Blass, Emilio Pucci, Cartier, and Givenchy to give the Continental Mark IV and V the imprimatur of high fashion.

Interestingly, Lincoln’s deal with Givenchy apparently did not preclude them from also partnering with Nissan to create a their own Givenchy Edition cars. Initially, Nissan simply called on the fashion brand’s founder, Hubert de Givenchy, to simply star in the commercials introducing the C31 Laurel. Surrounded by twirling models, he would turn to the camera and say, “Laurel, mon image” (Laurel, my image). 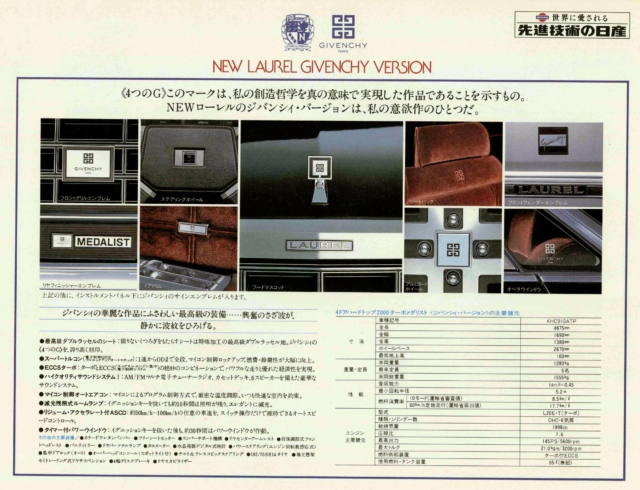 The commercial was followed a couple of years later by an actual Laurel Givenchy Version, released in November 1982. The Givenchy Version cars featured Givenchy emblems absolutely plastered throughout the car. Some came in the form of logos, some in the form of Hubert de Givenchy’s signature, but they were everywhere: the grille, rear trunklid trim, center caps, opera windows, steering wheel, door trim, seat fabric, fenders, and dashboard. There was even a stand-up hood ornament with the four stylized Gs. 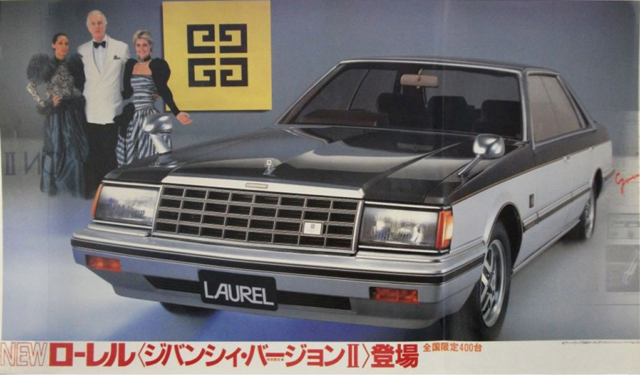 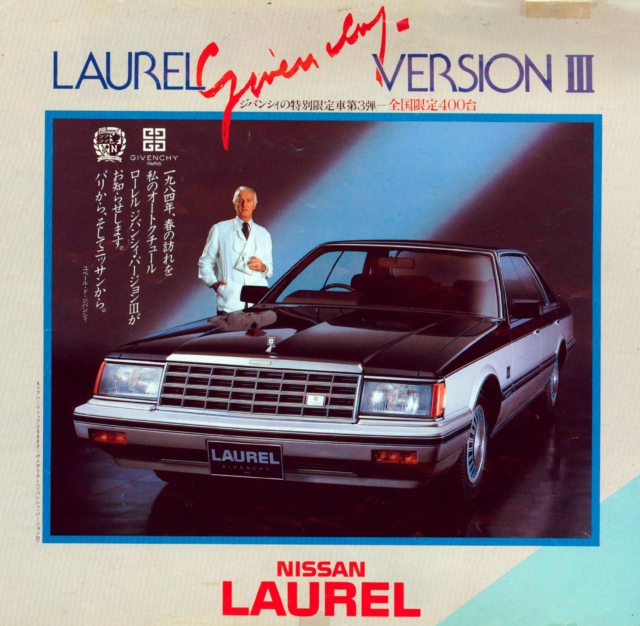 Rewinding a bit, in 1964 the Daimaru department store became Japan’s exclusive retailer for Givenchy. At the time, it was the country’s largest retail chain. The history of the company can be traced back to 1717, founded by the Shimomura family in Kyoto. As the store grew, former president Shotaro Shimomura the 11th would travel the world looking for goods to sell in Japan. In London, he became enamored with the legendary fabric and clothing store Liberty and its Tudor architecture. After returning to Japan, Shimomura built a mansion on his Kyoto estate in the same style in 1933.

Shimomura’s son, Shotaro Shimomura the 12th, eventually became president of Daimaru. With the family’s substantial wealth, Shimomura could have had any car. But, because of their long relationship with Givenchy, he bought a Nissan Laurel Turbo Medalist Givenchy Version when the car was introduced in 1982.

In 1983, Hubert de Givenchy and Audrey Hepburn went to Japan for a fashion show, a 30-year retrospective of the Givenchy brand. According to the Daimaru estate’s manager, Mr and Mrs Shimomura picked the two up at the airport in this very car and drove them around Kyoto.

After Shimomura passed away in the mid-2000s, the Laurel sat dormant. Recently, while cleaning up the estate, the Daimaru estate’s manager suggested to Shimomura’s widow that they donate the car to Nissan’s heritage collection. She agreed, and the car was put on an enclosed trailer headed to Zama. Nissan says they will restore a few worn parts, but otherwise keep the car in tact. In terms of C31s there’s already a 1981 Laurel 2000 Turbo SGX and a 1983 Laurel 4-door Sedan 2000 Medalist in the collection, but the Givenchy should be the best example of the generation. It’s good to know that this very special car has gone from one good home to another.