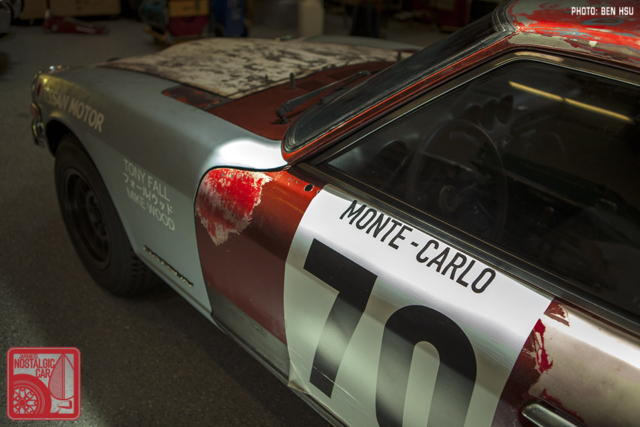 As iconic as the Nissan Z is, remarkably little is known in English-speaking countries about its motorsports history. In the US, the American-spec Datsun 240Z is best remembered, and deservedly so, for its SCCA victories. But while names like Peter Brock, John Morton, and Bob Sharp were conquering American road racing, the Nissan mothership in Japan was in the midst of an all-out assault on international rallying. 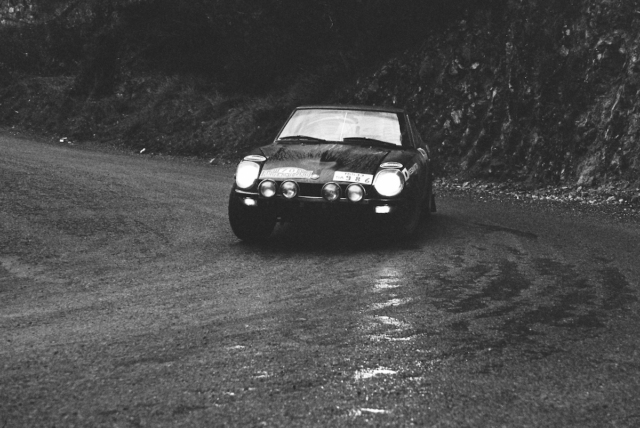 It’s not surprising that Nissan’s rally undertakings are unknown to most Americans. WRC drivers are household names in Europe, but the sport barely registers a blip on our radars. One glance at Nissan’s Zama Heritage Collection, though, and it’s quickly revealed how highly the company regards its rallying achievements. There are three different black-on-red Z-cars, winners of the 1971 and 1973 Safari Rally, and a third-place finisher of the 1972 Rallye Monte-Carlo. 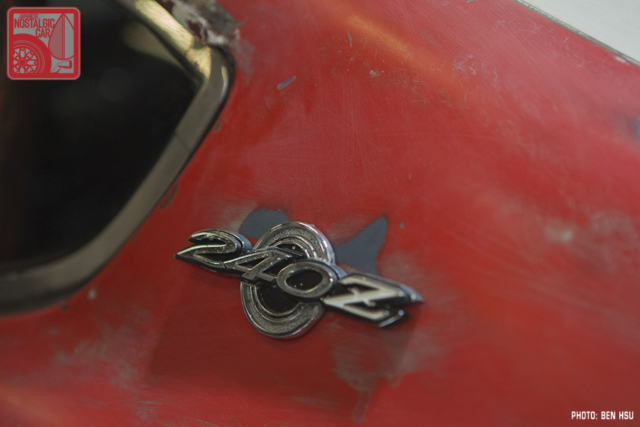 These cars represent the pinnacle of Nissan’s factory racing efforts with the Z. As successful as the SCCA cars were — and they did win back-to-back national championships in 1970 and 1971 — those were stock Datsun 240Zs heavily modified by Brock and Sharp, with financial backing from the US sales and marketing arm of Nissan Motor Corporation. The rally Z-cars, by contrast, were built by Nissan Works, a unit within Nissan Motor Corporation. In other words, they were borne of the racing program run by the company that engineered the Z itself. 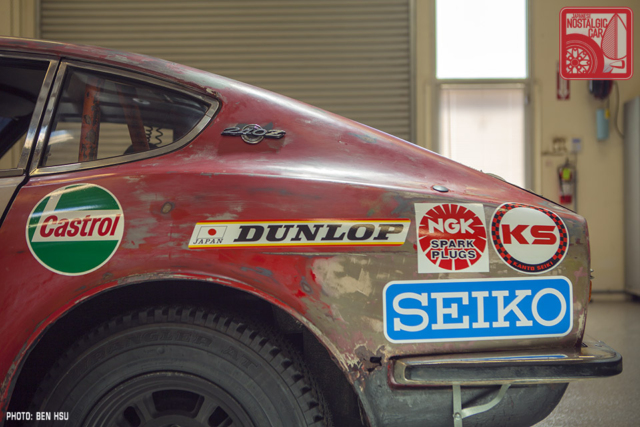 Nissan entered its Works rally cars in FIA competition as the Datsun 240Z, but they had little in common with the HLS30 240Z sold at your local Datsun dealer circa October 1969. Beneath the hood lurked a version of Nissan’s SOHC 2.4-liter inline-6, but the car’s bones were more closely related to the Z432-R than the 240Z. 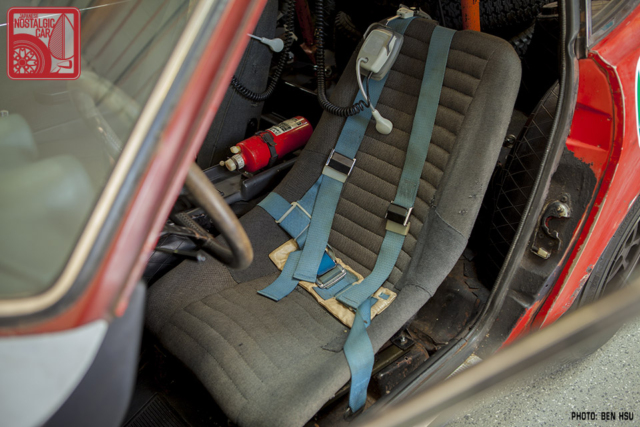 That means they were initially assembled with Z432-R parts that are labelled “PZR” (P for Prince Motor Co., Z for Fairlady Z, R for race) in the Japanese S30 parts manual, like an FRP hood, plexiglass windows, and Ikeda Bussan racing seats. According to Tom Knudsen, owner of the 1971 Rallye Monte-Carlo’s 10th place finisher, and noted Nissan Works historian and enthusiast Alan Thomas, Nissan appears to have built the rally cars in batches, each consisting of several cars tailored to the specific race they’d be campaigned in. 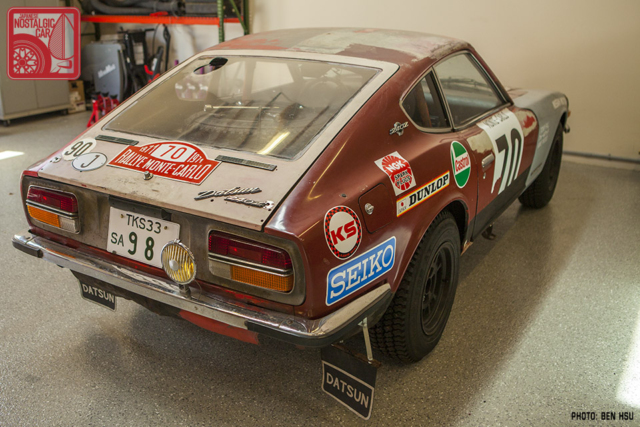 Nissan’s goal was to launch an assault what was considered the triple crown of the rallying world: the UK’s Royal Automobile Club (RAC) Rally, a forest race; Rallye Monte-Carlo, a tarmac race; and the East African Safari Rally, a desert race. Nissan developed three basic specs to tackle each of these races, so cars from one batch may vary extensively from those in another. 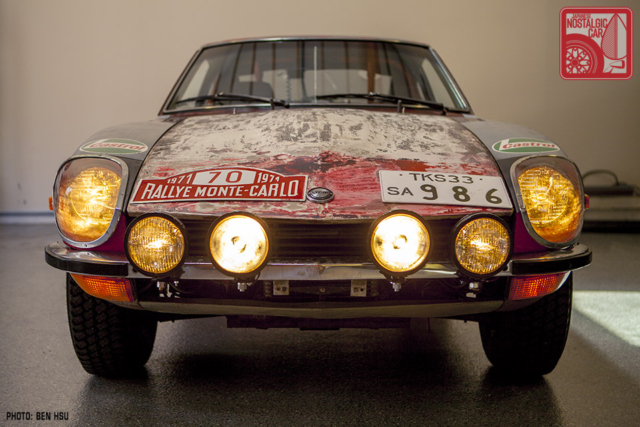 Further forking the lineage was an FIA rule change starting with the 1972 season. New books banned FRP panels and plexiglass windows, so starting in 1972 Nissan began transitioning to all-steel bodywork. All in all, the lightweight cars saved about 200 pounds, but what they lost was gained back with about 200 pounds of race equipment. 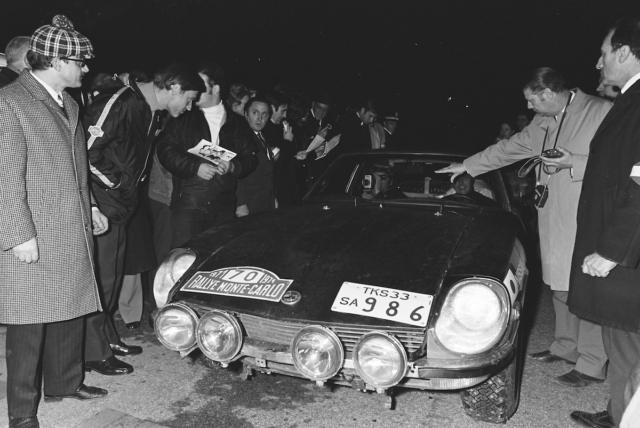 Nissan has never published records of how many Works rally Zs it built, but Thomas and Knudsen believe that around 40 were made for international rallying, with about half being lightweight examples. Only eight of the rally cars, lightweight or not, are known to have survived. Nissan holds three, as mentioned above, and among the five under private ownership, two have been converted to track use in the intervening decades and stripped of their Works rally-specific parts. So for all intents and purposes, there are only three “complete” Works rally Zs in private hands. 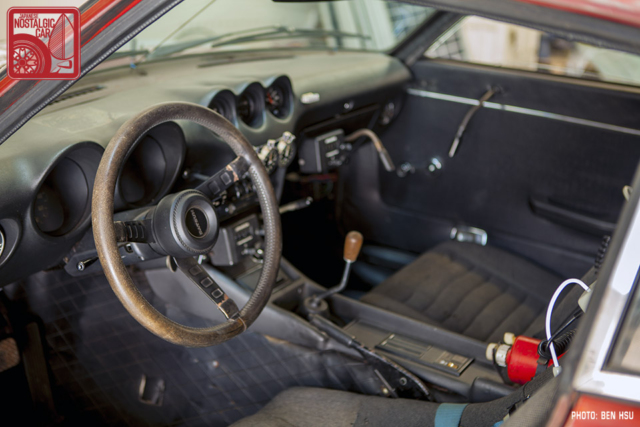 As such, it’s an incredibly rare opportunity to get up close and personal with one of these machines. We recently had the chance to pore over Knudsen’s Monte Carlo car and see many of its factory racing parts. The car may not look like much right now, but soon it will undergo a full rotisserie restoration. Therefore, Knudsen’s walkaround was our best opening to spend some one-on-one time with, in an unrestored state, what Nissan Works engineers conceived of in Oppama over a half-century ago. 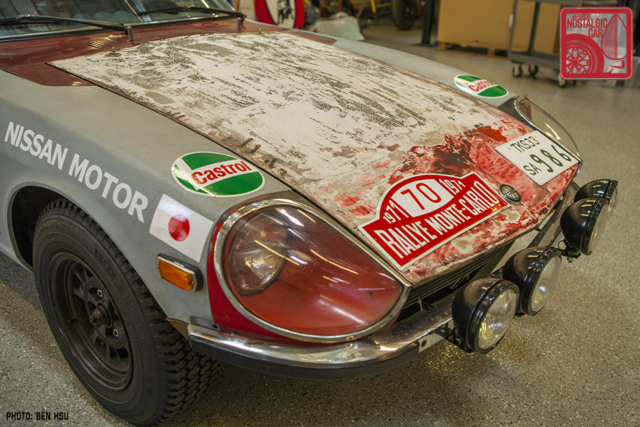 As noted above, early Works rally cars like Knudsen’s built prior to the 1972 FIA rulebook used the lightweight hood and plexiglass windows of the Z432-R road car. To that they added FRP doors and rear hatch as well. Notably, the plexiglass rear window is bonded to the hatch as a single piece. The Z432-R, and thus the Works rally cars, came with factory mounts for a 4-point safety harness, though the rally cars use a different mounting location.

From there, Nissan added items like a roll cage and an extended range fuel tank that fills up the spare tire well. To be entirely accurate Nissan made several fuel tanks, varying their shapes for clearance, so their actual capacities varied. The trunk contains additional pumps that move fuel into a reservoir in the cabin, and from that reservoir to the engine (Note: the pumps shown are not the original units, which were separated from the car before Knudsen acquired it) to prevent fuel starvation. 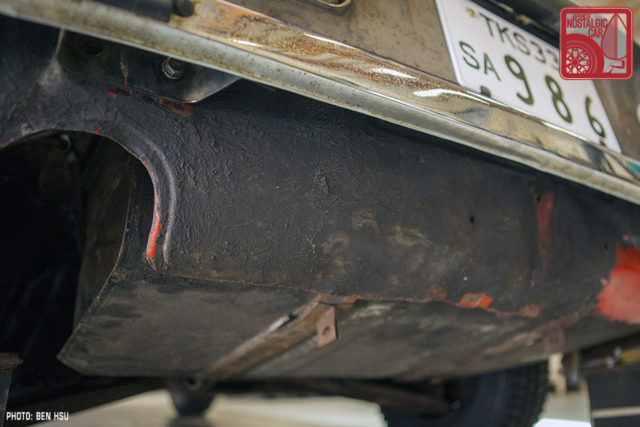 Perhaps more a more interesting facet of Knudsen’s tank are the lines passing between it and the differential. In competition early Nissan diffs sometimes succumbed to overheating. So Works engineers added an oil cooler to the nearest source of unheated liquid — the fuel tank — using gasoline to lower the temperature of the gear oil. 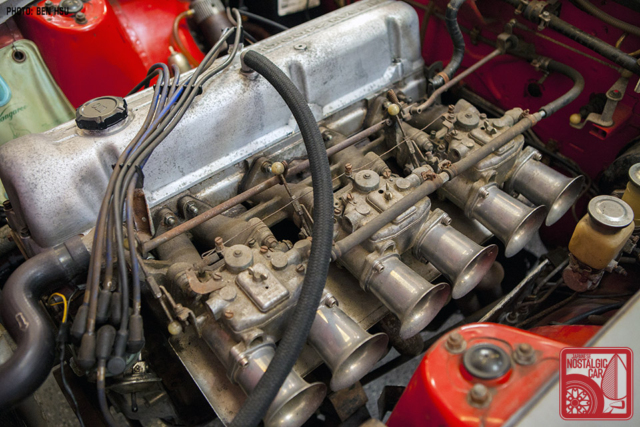 Raise the hood past the Works hood pins and at first glance Nissan’s familiar L24 engine resides beneath. Engineers tried a variety of competition configurations during the Z’s four-year campaign, so it’s difficult to pin down a “standard” Works setup. Knudsen’s motor appears to be an earlier spare Works replacement, but a typical arrangement would have seen a hand-assembled L24 equipped perhaps with a counterweighted crankshaft, competition rods, forged domed pistons, lightweight flywheel, ported cylinder head, aggressive cam, and sodium-filled valves. 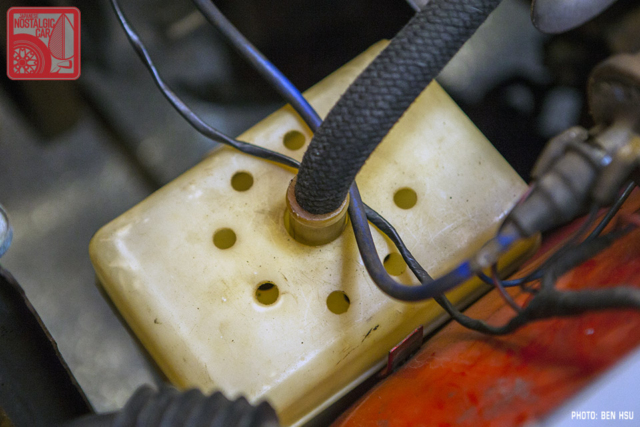 What’s more important in identifying a Nissan Works rally car, however, are the race parts surrounding the motor, all of which are present on Knudsen’s car. Some of them, an oil catch can or intake manifold, for instance, could be purchased from Nissan’s competition parts catalog. Others, such as the exhaust manifold, were bespoke pieces for the rally cars and never made available to the public. 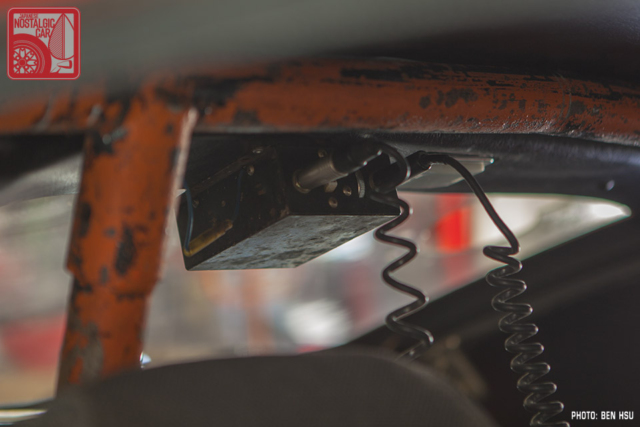 Balancing the mechanical beauty of a triple-Mikuni’d L24 are artifacts of pure utility. Halda cables link each front wheel hub to mileage counters attached to the console. A Works wiring harness snakes though the engine bay before branching off toward a high-output alternator and ceiling-mounted communications box. Twin-output, high-velocity windscreen cleaners jut out of either side of the cowl, each fed by its own water source: on the left, a conventional reservoir, on the right a “kangaroo” pouch from a Fairlady roadster.

Purposeful rally accoutrements continue into the cabin. Compared to the pilot the co-driver rides in relative luxury from comfort of a reclining navigator’s seat. A button affixed to the floorpan below it blows a FIAMM airhorn. Knudsen added rally clocks to the factory console mount, but the original timers are long gone.

All around the car, modifications were made to accept additional equipment, each one leading to more chunks of unobtainium to collect. Quick access jack points on the rocker panels, holes from which to hang mud flaps, mounting points in the cargo floor to hold down a spare wheel and tire. There are so many parts specific to the Nissan Works program that it’s more or less impossible to amass them individually today. 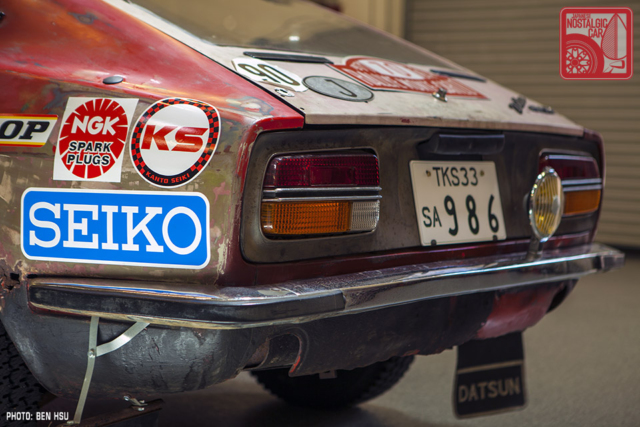 But if that wasn’t enough, remember that each batch of rally cars was built for the specific race they were competing in. Thus, in order for Knudsen to complete his Rallye Monte-Carlo 240Z, he needed even scarcer factory parts than the ones mentioned above.

Take the glass, for example. To tackle the snowy mountain passes near Monte Carlo Nissan developed a heated windscreen for the Z, embedded with heating elements and wired to the defrost switch in the center console. The Z’s iconic headlight buckets, already altered by Works engineers with forward-change headlights, have been further modified with a tiny hole for a defogging system that pulls warm air from the heater box to clear any condensation built up on the headlight covers. 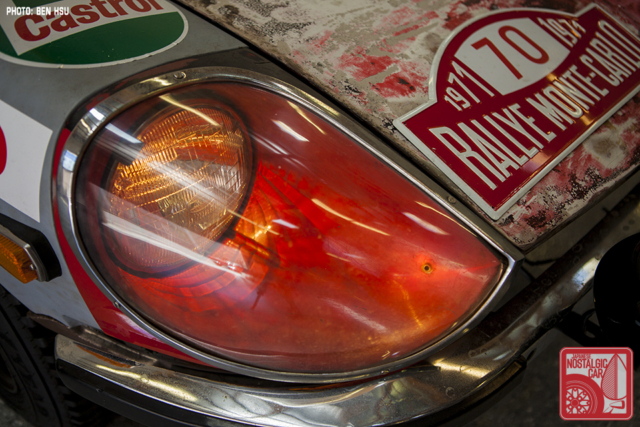 What’s amazing about these parts is that, though many were not available for public purchase, Nissan did track them in their own Works parts manuals with actual parts numbers. The heated windscreen has a factory Nissan stamp in the corner, just like a factory 240Z windshield would, a confirmation of its provenance. 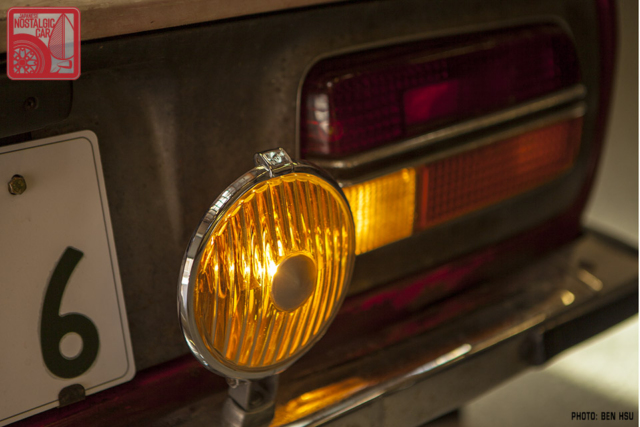 Knudsen is up front about what is and isn’t original on his car. The four rally lights, for example, are placeholders. He hopes to source the originals but, as one might guess, they are extremely difficult to come by. He did manage to track down a rear fog lamp, not the original but one identical to it. 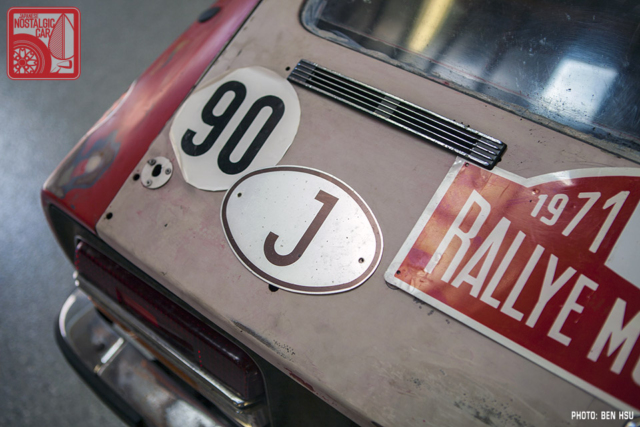 Nearly all of the decals and plates on the car are mock-ups recreated by scouring period race photos. Knudsen managed to find two correct Rallye Monte-Carlo plates, and replicated his car’s No.70 stickers to place over them. The TKS carnet plate is what would have let Nissan race overseas for up to one year, but it is a replica. All Works cars had a “J” plate for Japan, and the “90” decal, unique to the Rallye Monte-Carlo, is the speed rating for cars wearing studded snow tires. While the plates didn’t accompany the car when it was purchased, the location of the bolt holes for some of these plates were still present and helped Knudsen identify his car in vintage photos. 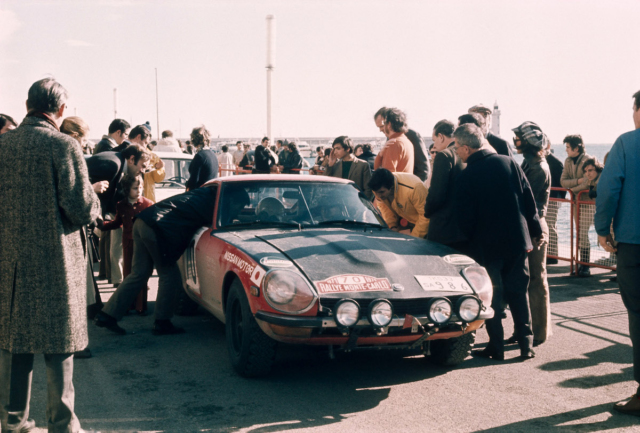 The significance of a Works 240Z, birthed from Nissan’s own factory racing program, cannot be understated. It is of a family of cars that brought Nissan recognition and fame on the world stage in some of the the oldest and toughest races on earth. There have been tribute cars built from road-going 240Zs, but given the rally machine’s wealth of unique parts and bespoke Works chassis as a starting point, it’s safe to say that any attempt to make a true replica would prove tremendously difficult. 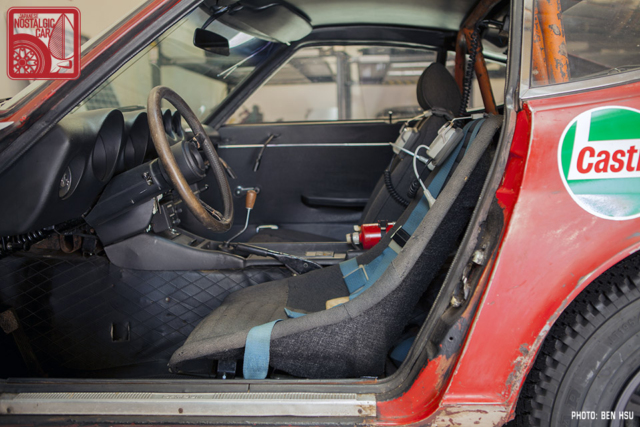 On a whim earlier this year, Knudsen decided to trailer the Z to a local event, the Z Owners of Northern California’s 50th anniversary show. A few die-hards fawned over the car, others were curious, but most didn’t really know what it was. This is not to disparage anyone from the show, but to say that Nissan’s rallying saga needs and deserves a lot more attention in the US. 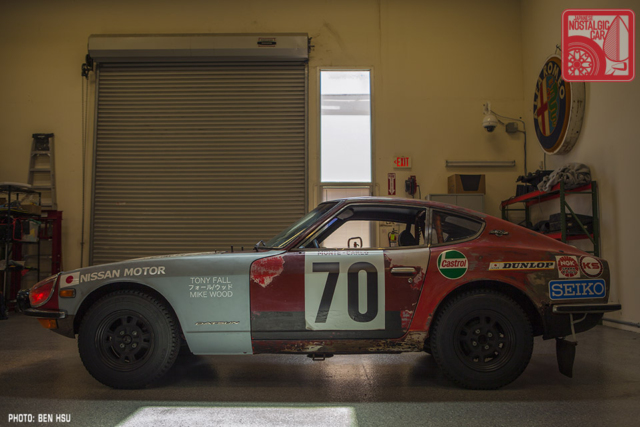 That goal will move one step closer to realization at the Japanese Classic Car Show. That’s when Knudsen plans to present the car for its first scheduled public showing in nearly 50 years. Those who appreciate such a significant piece of Nissan history — one tied to its most iconic car, no less — will be able to see it in person on September 10 in Long Beach, California.