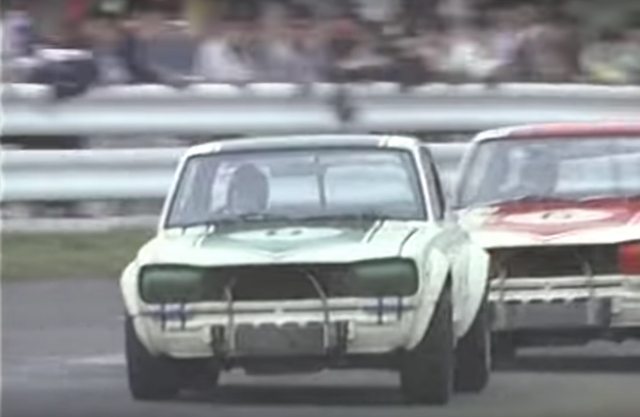 If you’ve ever wondered why Nissan has such a strong following among Japanese enthusiasts, this video snapshot from 1970-71 explains it all. Nissans of all types dominate the field in two major races from those years. Though this was likely put together as a Nissan promotional video, their total command over Fuji Speedway can’t be denied.

The first race shown is the 1970 Japan Auto Federation Grand Prix. As was typical, ticket holders were treated to several classes of competition. In the Grand Touring class the grid is comprised entirely of Fairlady 2000s. The most impactful series, though, is Touring Sedan. Though Toyota 1600GT and Corolla Sprinters mix up the field, the show belongs to the PGC10 Skyline GT-R. The only other car that comes close is the rotary Mazda Familia Coupé. In the end, it’s Motoharu Kurosawa who takes first, followed by Kenji Tohira, and Toshinori Takechi’s Mazda in third.

The film then skips ahead to the 1971 Japan Grand Prix. In the TS-a series for smaller displacement touring sedans, the 510 Bluebird SSS Coupes go head to head against everything from Toyota 1600GTs, Corollas, and even Publicas to Sunny 1200 Coupés to a lone Honda 1300 Coupé. The winner is again Motoharu Kurosawa, followed by Moto Kitano in second and Shogo Omori in a Isuzu Bellett 1600GTR in third.

The TS-b class welcomes the new KPGC10 Skyline GT-R, now with two fewer doors and instantly iconic. The Hakosuka sweep the podium, with Kunimitsu Takahashi taking the checkered flag, followed by Masahiro Hasemi and Hiroshi Kubota. A Mazda Familia Rotary Coupé driven by Yasuhiro Okamoto gets fourth place, a preview of what was to come with the RX-3.

It’s interesting to note that these Touring Sedan races weren’t even the main events. The top-level racing would be found in Grand Prix class, which saw none other than Jackie Stewart take first from behind the wheel of a Brabham BT30 in the 1970 JAF Grand Prix, and Kuniomi Nagamatsu win the checkered flag with a Mitsubishi Colt F2000 at the 1971 Japan Grand Prix.

However, the open wheel cars didn’t have the lasting resonance that Nissan’s Fairlady, Bluebird, and Skyline did, perhaps because they were too far removed from cars enthusiasts could buy and tune. The winners would take their parade laps in custom Nissan Gloria and Cedric open top parade cars. If you were a young man present at these events, how could you not want to head straight to the Nissan dealership when it came time to purchase a car of your own?