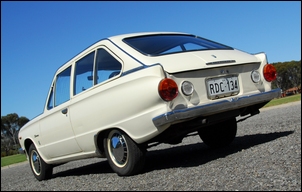 Here’s a great little article on a car that rarely gets any love, the Mitsubishi Colt. But it’s not the Colt you’re thinking of. While the US was getting Mitsus branded as Dodges and Plymouths, Australia got these exports straight from JDM-land. The US market Dodge Colts were called by other names like Lancer and Galant in Japan.

This car debuted in 1965 in as the Mitsubishi Colt 800 due to its 800cc motor. It was a sporty two-door coupe with styling inspired by the jet age. By 1966 the engine grew to 1000cc and it became known as the Colt 1000F. Finally, in 1969 it got another 100cc bump and was called – you guessed it – the Colt 1100F, which is the white one pictured here. You can see several posts in the JNC forum from our Aussie readers regarding these cars, including the sedan version. For more information, check out OldColts Australia.