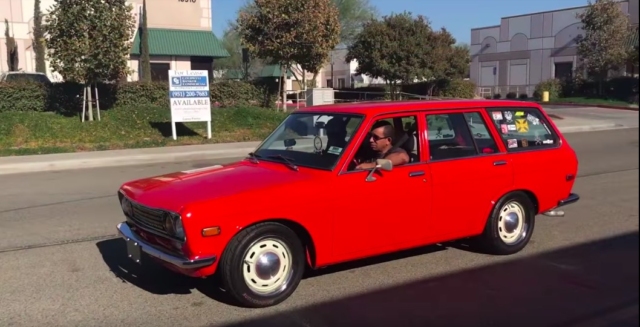 The online space for car videos is pretty crowded, but a favorite among the JNC staff right now is Australia’s Grassroots Garage. The editing is straightforward , their videos aren’t crammed with fancy drone tracking shots, and the host has a great accent. But it’s honest and, well, grassroots. They recently came to America and shot a whole lot of footage for a series called Datsun Heaven.

Showing just how diverse the Datsun 510 platform is, the series starts out with what is a pretty rare swap. SoCal native Miguel Cervantes installed a built Xterra V6 into his green 2-door.

Part two features Raymond Medeiros‘ 1971 510 wagon, which stays a bit closer to stock with an L-series, but a bigger 1.8-liter tuned with fuel injection and individual throttle bodies. We love the cleanliness of the engine bay and agree wholeheartedly that it needs no repaint.

In the third installment, Grassroots Garage talks with Ben Pila, owner of a 510 bought and built in the 1980s and kept in period style. It features a beautiful Mikuni-fed L20B stroked to 2.4 liters with a modified Nissan Hardbody crankshaft.

The fourth episode profiles Raymond Oca’s clean 1973 2-door, which runs yet another configuration under the hood, a KA24-T setup with ITBs from a Suzuki motorcycle.

Next, we take a break from the flurry of 510s to head to SEMA, where super friend of JNC Jay Kho’s DR30 Skyline was on display at the Enkei Wheels booth.

Part five returns to SoCal with John Ross Huckins’ 1972 510 Wagon, a car we’ve seen at many shows and are always stunned by. Not only does it have SR20DET power, but John redid the entire rear suspension with a 4-link and coilover setup.

Episode six features Sebastian Hill’s yellow 2-door. It also runs a K-series, but a naturally aspirated KA24. We can attest to the drivability of this car, as it is also a Touge California veteran.

The next video returns to SEMA, where they interview Troy Ermish, builder of Daniel Wu’s Tanto 510. Since it emerged from Ermish’s shop, it of course sports an L-series motor, but this one takes perhaps the ultimate form, a Rebello 2.4.

It isn’t until part seven that we finally get a 510 with a configuration we’ve seen before. Nelson Irwin’s 1971 510 wagon also has naturally aspirated twin-cam KA24 power, and is a father-son project many years in the making.

If this is 510 overload, it seems that Grassroots Garage isn’t even close to being done with their Datsun Heaven series, especially given the other familiar faces in the background that have yet to be featured. It’s really great to hear the owners tell their stories in a straightforward fashion and see the genuine enthusiasm shown by hosts Peter and Ryan from halfway around the world. We look forward to seeing more.

permalink.
This post is filed under: Video and
tagged: 510, datsun, nissan.