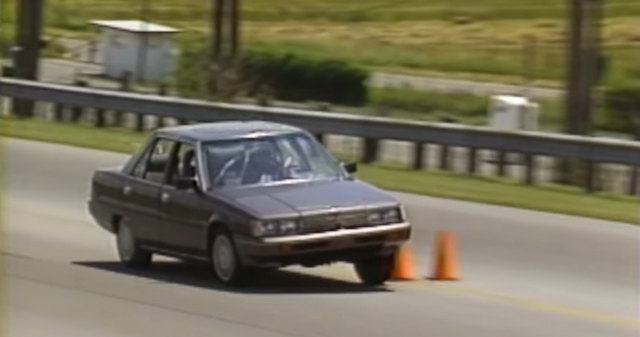 The 1986 Mitsubishi Galant occupied a strange space in the 1980s Japanese sedan segment. It was only offered with a four-cylinder, so it would have made sense to cross-shop it with an Accord or Camry. But, it was catapulted it into heights shared with cars like the Cressida or Maxima thanks to an insane slew of high-tech options that are only becoming commonplace on cars today.

This old Motorweek review is an excellent run-down of the Galant’s many charms.itsu Behold its shuttlecraft-esque styling, with its straight-cut rear wheel arch. From the front, it looks vaguely like a Renault Alliance, while a side profile says V10 Camry. Inside, however, is where the party is. Who doesn’t love center console that looks like the bridge controls on the starship Enterprise, a gear selector that resembles an Autobot’s holstered ray gun, and a button-laden pod that moves up and down with tilt steering? And apparently stereo buttons on the steering wheel were once called satellite controls (a $330 option with premium sound system).

The futuristic theme isn’t just skin deep, either. An optional electronically controlled suspension offered a Sport Mode that alters the damper valving for a stiffer ride. There are no less than four selectable ride heights, the tallest of which accommodates tire chains. All for the low, low price of $631! Of course, when the car starts at $12,989 that is a good chunk of change.

The sole powertrain was one of Mitsubishi’s trademark big-displacement inline-fours, a 2.4-liter mill with Silent Shaft counterbalancers. The result was a smooth four generating 110 horsepower and a not unimpressive 135 lb-ft of torque.

Sadly, the last time we saw one of these in the wild was probably 10 years ago. The good news is, if Craigslist 0fferings are probably barely cracking the four-digit range. The trick will be finding one in the first place.

permalink.
This post is filed under: Video and
tagged: galant, mitsubishi, Motorweek.