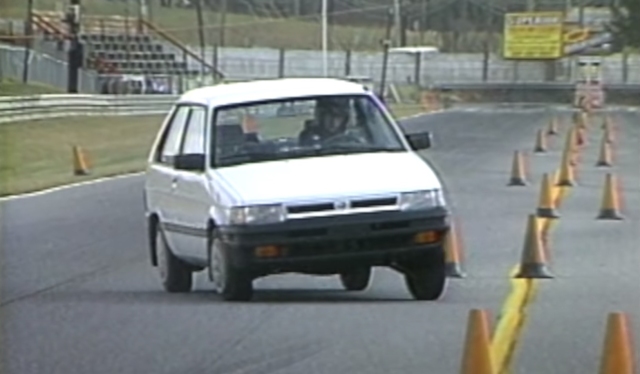 Here comes Jerry with a new car! The Subaru Justy started out as a Subaru Rex kei car, enlarged in all dimensions and fitted with a bigger engine to compete in the 1-liter class in Japan. In America, it gave Subaru a fuel-efficient compact to fill out their slim portfolio. However, the Justy was probably most well-known for introducing to Americans the dreaded CVT, or continuously variable transmission.

The E-CVT, as Subaru called it, was futuristic stuff when Subaru debuted it in 1989. Many automakers had been talking about it, some had tried it, but Subaru’s was the first one that can be traced to the modern ones we loathe today.

With no discrete gears, the CVT used an shrinking and expanding metal band to change the ratios between engine speed and wheel speed. As expected, though, when Motorweek tested one in 1989, they reported a loud, buzzy engine under hard acceleration as the 1.2-liter 3-cylinder churned at sustained high rpm to churn out all of its 66 horsepower and 70 lb-ft of torque.

On the flip side, it helped the Justy return a fairly impressive 34 city/35 highway mpg. The 1989 model’s improved 0-60 time of 12.5 seconds was likely due to the engine’s 0.2-liter increase in displacement than anything to do with the CVT. 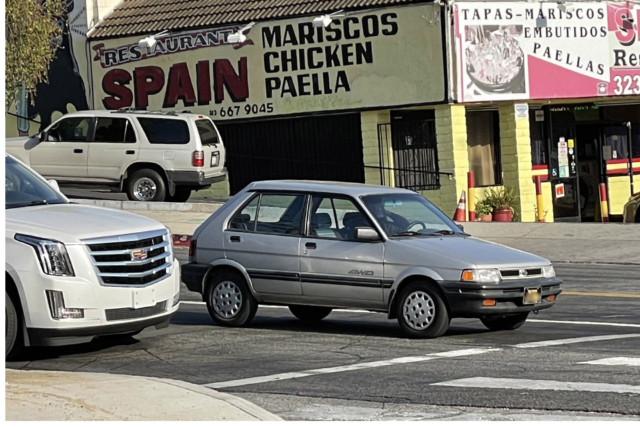 The good news is that the Justy was a fairly solid car. Motorweek praised the suspension, saying that handling and ride matched cars that cost thousands more than the Justy GL FWD’s $7,251 starting price. They also praised its grip and steering feedback. Braking felt good but occasionally it would lock up one of the rear wheels.  Add to that a comfortable rear seats and you had a surprisingly decent car — if you ordered it in a manual.

Apparently, the Justy still has its fans, too, because we just saw the silver example above a few days ago, still kickin’ it in on the streets of Los Angeles.

We could see the appeal of a CVT back in 1989. Unlike the smooth 6- to 8-speed automatics of today, back then they were limited to four speeds at the most, and many, especially on the lower end of the cost spectrum, shifted fairly hard. Plus, fuel savings would have been most people’s reason to buy a compact hatchback. Was that enough to justify (ha!) the $540 premium for Subaru’s CVT? That depends on your particular tastes, but it made more sense on a Justy than on a WRX.

permalink.
This post is filed under: Video and
tagged: Justy, subaru.

1 Response to The 1989 Subaru Justy pioneered the dreaded CVT