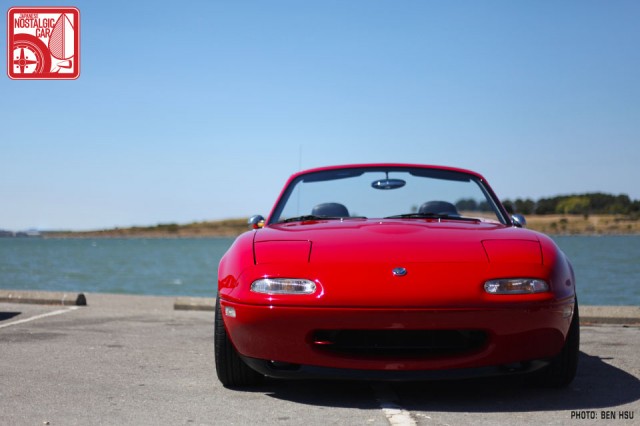 This week at the New York International Auto Show, Mazda will officially celebrate the 25th anniversary of the Mazda Miata, thus inducting it into the “25 Year Old” club of Japanese nostalgic cars. The great thing about the MX-5 is that it makes the joy of driving attainable by nearly everyone. Like the Datsun 510 of old, everyone either owned one or knew someone who did. So tell us:

We have two NA Miatas in the JNC family. Justin’s is a daily driven example that’s been to MazFest, JCCS and other events all over California while Ricky’s is an original owner car yet still cleaner than most new cars after over two decades of ownership. Both are red, both are brilliantly fun to drive, and both have always known these cars would achieve nostalgic status one day.

What say you, dear reader? As always, the most entertaining comment by next Monday will receive a toy. Click through to see the winner of the last QotW, “What’s your best high mileage JNC story?” 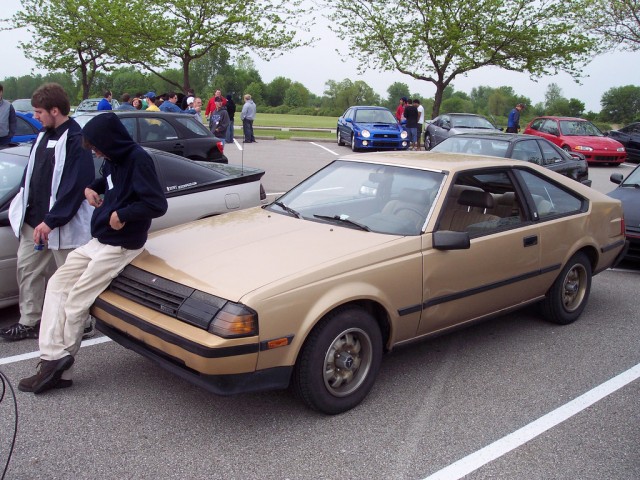 This week’s winner is Bob, who tells the sad, sad tale of a much-abused A60 Celica. It’s a long read, so you might want to settle in with a drink and snacks to get you through the journey.

Back in, oh, 2005ish, my friend Arvin was looking for his first car. I had registered as a bidder at a local car donation lot that, for awhile, used to get lots of really interesting cars running through it. I had thrown bids on a non-running ’73 Grand Marquis that was completely immaculate with every maintenance record and the window sticker and sales receipt in the glove box, and a few SA/FB RX-7s. Arvin scoured the auction website for awhile and one day spotted a gold ’84 Celica GT hatch, and decided he wanted to bid on it. So we went on the bidding day, got a quick look over (day of auction, couldn’t actually touch the cars), and he ended up winning it for the second highest bid, $150. Turned out to be an automatic, but it was incredibly clean and reasonably straight. He gave his deposit, and we ran back to his house to get money for it. Which is when he told his Indian father that he’d just bought a car.

I don’t understand the language, but pure rage needs no translation. There was a lot of frantic screaming and finger pointing, but bedgrudgingly his father went to the bank with him, let Arvin take out some money, and we drove to the donation lot. Not a comfortable ride. A lot of obviously sarcastic/snarky angry comments were fielded his way.

Once back at the auction lot, he paid the remainder of the car, tax/title/fees, and was handed the keys. And there we were, getting our first real view of the car.

During the bidding, the car was started up, revved a bunch, and allowed to idle for the remainder of the bidding. It sounded healthy, smooth, quiet. Looked inside, odometer read something near 150,000 miles. As we poked around, Arvin started the car and let it idle… which it did for a whopping 30-40 seconds before it stalled. And then it wouldn’t start again, just cranked and cranked. Fuel gauge showed it had half a tank, but we tried to open the gas door regardless… and the tab holding it in wouldn’t budge.

One of the lot workers wandered up and was watching us, and tried to help by grabbing a screwdriver, shoving it in the fuel door, and prying it back, breaking off the tab. Lovely. And that was when we realized that we had no way to figure out whether it had gas or not, rendering the exercise useless.

While we stood around wondering what was wrong, another lot worker wandered over and began talking with the first one, who mentioned that the car wouldn’t start.

Second lot worker: “Isn’t this the one with the hole in the oil pan?”

And that’s when we looked underneath. Sure enough, there was a lovely 2 inch long gash in the oil pan. Now we knew why it had been donated. And that’s when it hit us: During the two day inspection period prior, people had been coming over to this car and revving the piss out of it, most likely. Without a drop of oil in it. And the auction people were doing the same.

Arvin’s father, who had been standing by, fuming in silence, finally had a big smile across his face for the first time all afternoon, as Arvin stood there in speechless horror. His father began gleefully chiding him in broken English. “OH, LOOK WHAT GOOD CAR YOU BUY! SUCH GOOD CAR, WITH NO OIL IN IT!”

Knowing we couldn’t leave it where it was, we pushed the Celica to the parking lot, locked it up and left. There was a 24 hour grace period to come pick it up, and I managed to find him someone who’d tow it. Of course, when he returned to get the car, trailer in hand, he realized he’d left the keys at home, 20 miles away. And so we had to pry the window back, break into the car, and with it in neutral, roll it straight onto the trailer.

It sat for about a month before I’d managed to secure him a free parts car, a rotted out ’85 GT with a 5-speed.

In the effort of shortening this story, Arvin managed to swap the oil pan off the rotted car onto the gold ’84 and, once full of oil, it started right back up again. And drove perfectly fine. However, Arvin had gotten it in his mind that he absolutely wanted an LS400 and nothing else would be good enough, and though he loved the Celica he felt it wouldn’t be perceived as cool by his peers. So, he gave it away to Emo Mike, a mutual friend who helped him with the oil pan swap and liked the Celica a bunch.

Mike immediately decided he would swap the manual out of the parts car, and despite not really having any previous mechanical experience, bought a new clutch/flywheel/throwout bearing/slave cylinder, and within an afternoon, had a 5-speed in the gold car. The rusty ’85 was unceremoniously scrapped with the remainder of it’s parts, much to the frustration of both me and the person who had given it to him (who, himself, bought it for the 22RE in it).

Mike needs a bit of explanation. Mike is a very quiet guy. He barely talks, but when he did, what came out was gold. He has a dry and wicked sense of humor, if you can actually hear him. He was always immensely depressed, sullen, and quiet.

But he loved the Celica. He became immensely proud of it very quickly. He did some minor maintenance, cut the springs one afternoon, threw on the part’s car’s pizza cutters, hacked off the exhaust and welded a cherry bomb to it, and went to town.

Unfortunately, despite his love for the car, he was always treated it… roughly. He decided one day while sitting in a parking lot that he should gut the perfect interior… and began ripping everything out with his hands and threw it all in a dumpster. He took the air filter off… and never reinstalled it. Never meaning since, oh, 2006, to current, it’s been driven constantly without an air filter or airbox, just a MAF dangling in the engine bay unprotected. One of the incredibly dry rotted tires on the Pizza Cutters let go at speed, and the tread HAMMERED the quarter panel before coming off completely.

And then, somehow, the car became an accident magnet. Three times he was sitting at lights or stop signs and was rear ended. Once, during a drunken fight with his violent ex-wife (He himself has lead a very interesting and sad life), he tried to drive away and ran into a tree 2-3 doors down in a snowstorm.

The last time it was rear ended several years ago, the hatch was mangled and the glass blew out. The seats were bent so badly from his body hitting it in an accident that he drove it with a twisted gangster lean. A friend was restoring a P-type Supra and decided the grimy seats weren’t for him, so I drove them to Mike’s house and he installed them. One day we were driving in a caravan to another friend’s house, when the Celica sputtered and died on the freeway. Pulling over, there wasn’t a drop of oil on the dipstick. Mike didn’t remember the last time he’d checked, or changed, the oil. It started again, and just barely made it off into a gas station, where we bought some oil. It started, and made it another 2 miles before it conked out again. I eventually just pushed it off the road with my Impala, and drove him away. We came back with a truck and trailer, hauled it, and Mike spent two whole days figiting with it in our friend’s barn before someone knocked on the gas tank and discovered it was bone dry. I drove him with a can to the gas station 6 miles away, he filled it up, spilled half of it in my car, and we made it back. That night driving home, I swerved to avoid a deer, and of course, the only car coming in the other direction was the local police, who pulled me over, began asking why I was swerving, and then wanted to know why the car stunk of gasoline. I was let go an hour later.

We fixed the broken hatch with the only one we could find from a rusty P-type, and took the taillights from it too. Chained the Celica to a tree, and made about 20 hard pulls to get the back end out as much as we could, tin snipped the holes big enough for Supra tails, and slapped it all together.

Just this past year, the spool he installed when he first got the car blew up in spectacular fashion. We tried for awhile to find any differential for it, but the yards here have barely any Toyotas besides rotted trucks and X7s. In the end,he found the open diff… which had been sitting outside in his yard since he put it there 6-7 years prior, coated in surface rust, and threw it in. And that’s how it drives right now.

Despite this ridiculous level of abuse, it’s gone another 120,000 miles in his ownership. The car never ceases to amaze me. At times it’s been his only possession, and other than running out of gas and the shattered spool, it’s never left him stranded, and that poor 22R, while it’s certainly not as healthy as it was in 2005, still starts every day, no matter what, and takes him where he needs to go. Even if he goes 10,000 miles before he remembers it needs an oil change, or any oil at all.

Maybe it doesn’t have the highest mileage, but I doubt that million mile Mark II had endured as much abuse.