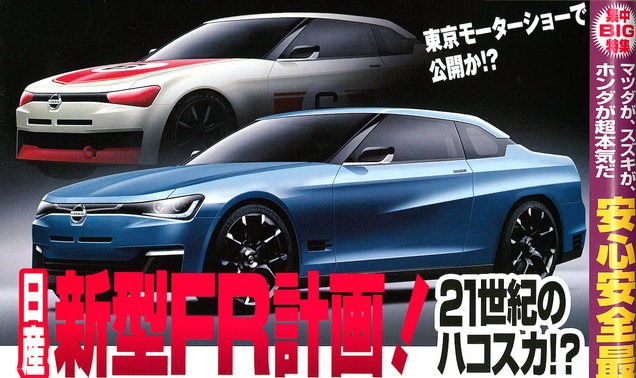 With the disclaimer that this is pure speculation, we present an image a new rear-wheel-drive Nissan 2-door sedan expected to debut at the Tokyo Motor Show this fall. The cars you see here will appear on the cover of the April 10 issue of Japan’s Best Car magazine and are claimed, audaciously, to be renderings of a production model. 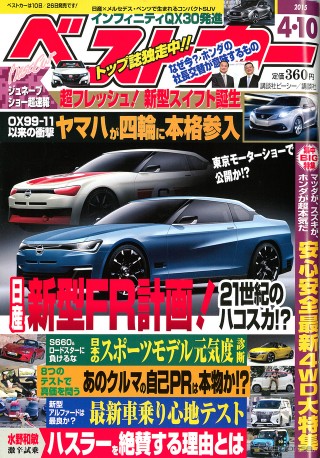 We would be remiss if we didn’t warn you that Best Car is notoriously tabloidy and any rendering must be taken with a grain of salt. Also, this is not an official statement by Nissan of any sort.

That said, the images are particularly notable for what is suggested as the NISMO version, as it is decked out in the livery of Motoharu Kurosawa’s 1972 works Hakosuka GT-R.

While the most obvious comparison will go to the Nissan IDx concepts, this pair is less Datsun 510 and more Skyline with a roofline that’s pure R35 and rear haunches taken from the R34 and R35. There’s even some semblance of the surf line cutting up the rear profile.

The slit in the C-pillar acknowledges the new crop of Nissan styling cues that debuted on the Sports Sedan Concept (likely to be the new Maxima) and Murano. However, what’s lacking in this illustration — and thus lending even more credence to the theory that it’s not at all reliable — is the lack of a V-Motion grille.

The new corporate face, established by Nissan Executive Chief Designer Mamoru Aoki, was deemed so important that Nissan even retrofitted it onto the nose of the IDx Concepts somewhere between the global debut at the Tokyo Motor Show in October 2013 and their North American debut in Detroit in January 2014.

So while we’re all excited at the prospect of a small, rear-wheel-drive 2-door from Nissan, and that remains a possibility, we’re not going to hold our breaths on the styling to look anything like this, nice as it may be.