VIDEO: The fifth-gen Honda Accord was “the most widely anticipated family sedan ever” 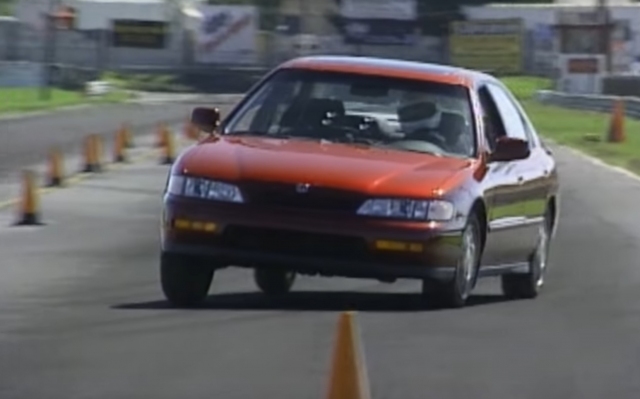 The Honda Accord was the first imported car to hold the crown of best selling car in America. Starting in 1989, the third-generation CA Accord‘s 362,707 in sales held the top spot, and carried it over through the first two years of the fourth-gen. Ford regained the title with the Taurus in 1992, so when Honda debuted of the fifth-gen in 1994 it was indeed looked upon with excitement.

Motorweek said they couldn’t “remember when anything but a low volume exotic was the subject of so much speculation” and called the Accord “the benchmark for family transportation.” Sleeker and more powerful than its predecessor, it came with two versions of Honda’s 2.2-liter four. DX and LX trims had a SOHC head with 130 horsepower and 139 lb-ft of torque, but the true Honda heads knew that the EX was the one to get, with its 145-horsepower, 147 lb-ft VTEC mill.

Oh, and it was available with a 5-speed during Honda’s peak era of manual shifters. Motorweek tested a stick EX and got a 0-60 time of 8.9 seconds, but it was really the double-wishbone suspension handling that separated it from its A-to-B commuter competition.

In the end, the Taurus would remain the sales champ until 1997 when it was overtaken by the Camry. However, true enthusiasts knew what the sportiest family hauler was, and it, along with the Maxima SE, were the family sedans that teens of the era were stoked to inherit. They supported a thriving aftermarket as well, and in the end we think that makes the Accord the true number one.

permalink.
This post is filed under: Uncategorized and
tagged: accord, Accord 5g, honda.

3 Responses to VIDEO: The fifth-gen Honda Accord was “the most widely anticipated family sedan ever”