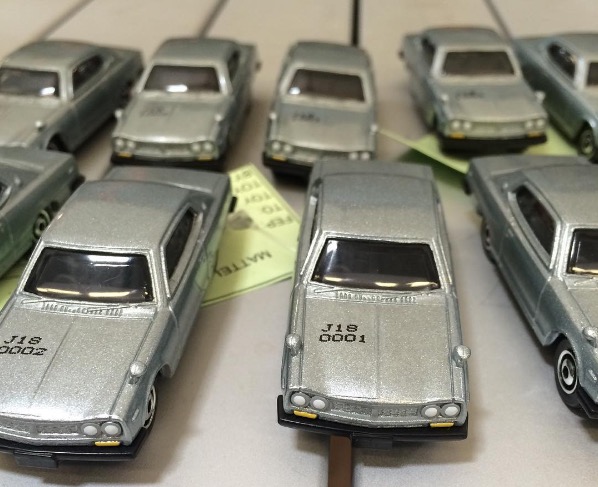 Matchbox has just teased a new casting for 2016, and it’s none other than the hakosuka Nissan Skyline. Technically, it’s a 1971 Skyline 2000GT-X, complete with the surf line over the rear wheels and it’s still in prototype form (that’s what those numbers on the hood mean). Like the Hot Wheels Hakosuka, it’s a groundbreaking model for the line, which may open the doors for a new wave of collectors to discover Matchbox.

At first glance, the model looks fantastic. The mirrors are cast very nicely and you can see the small curve inward for the stands. The wipers are also nice and thin, not heavy, which is hard to do in 1:64 scale, especially when molded into the body.

Since the car is silver, it’s hard to discern the grille and surround trim, and whether in future releases in different colors this will be picked out in silver. The trim is also very defined so together with the grille it will make a very nice (we hope) premium version when those areas are highlighted.

The tampos for the headlights and signals are very crisp and applied perfectly, although in this case it would’ve been nice to see Matchbox’s old method of printing the reflector lens highlights. Hopefully, the final version will have a chrome base.

In recent years, Matchbox has been faltering due to a heavy reliance on trucks, construction equipment, and original designs that don’t take after any real-world models. The Hakosuka represents a drastic shift in direction to the old Matchbox we loved as kids, with realistic, detailed interpretations of real cars. The fact that it’s a 50-year-old Nissan Skyline is proof that JNCs are the hottest thing in diecast these days.