Land Cruisers You Can Wear 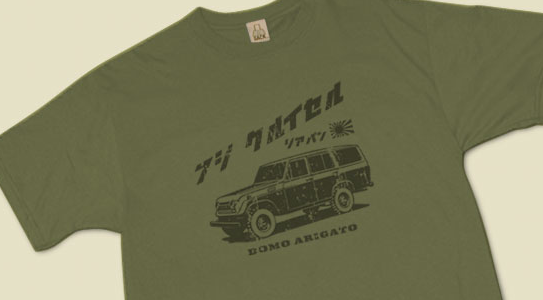 Someone over at this T-shirt site must love Land Cruisers because they have at least 3 shirts dedicated to the old Toyota workhorse. Our favorite one is this one pictured, even though we’re not really sure what it says. The second of the big words on top is “kuruiseru” (though the actual Japanese should read クルーザー) but we’re at a loss for the others. We were simply sold by the tag line “Which way to Mt. Fuji?” The creator sure knows his Cruisers, which in 1951, were the first vehicles ever to reach the sixth stage of the famous Japanese mountain.

UPDATE: We got an email from the T-shirt’s maker, Tim McGrath, who writes that the shirt is meant to say “Fuji Cruiser” and “Japan” but found out later that the Japanese was wrong. He laughs it off, though, telling us, “Oh well. I thought it was kinda funny like those bad English shirts you would see in Japan.” There’s more coming too, including the FJ45 short bed, and FJ43. Thanks, Tim!

permalink.
This post is filed under: nostalgic gear, toyota, trucks.

3 Responses to Land Cruisers You Can Wear