Do you want to feel old? Yesterday, ahead of the Los Angeles Auto Show this week, automakers swarmed the city to show off their upcoming models. But here’s a plot twist we didn’t see coming: for some Japanese firms, namely Nissan and Honda, nostalgia for the sport compact days of the 90s are already back. 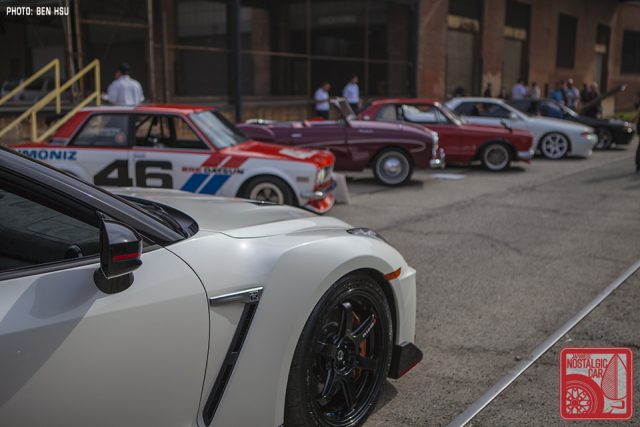 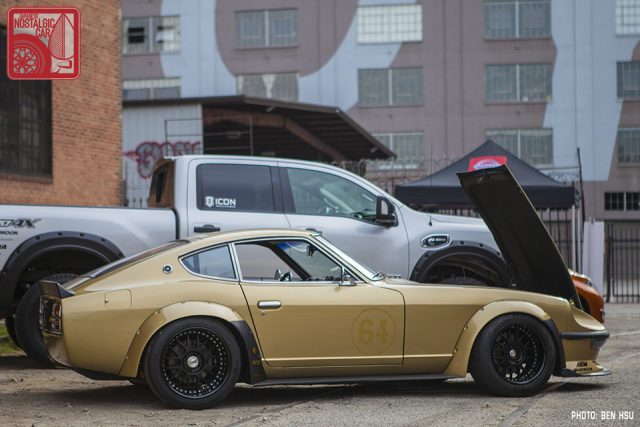 First up was Nissan, who dragged the press to a seedy industrial area of downtown LA full of well-weathered warehouses, graffiti, and barbed wire fences. Like a scene straight out of The Fast & The Furious, a lineup of iconic cars had assembled among environs in which you’d never leave your rice rocket unattended. Among them, John Morton’s BRE Datsun 510, a Hako, a pair of R32 GT-Rs, Chris Forsberg’s drift 280Z, and a NISMO R35. 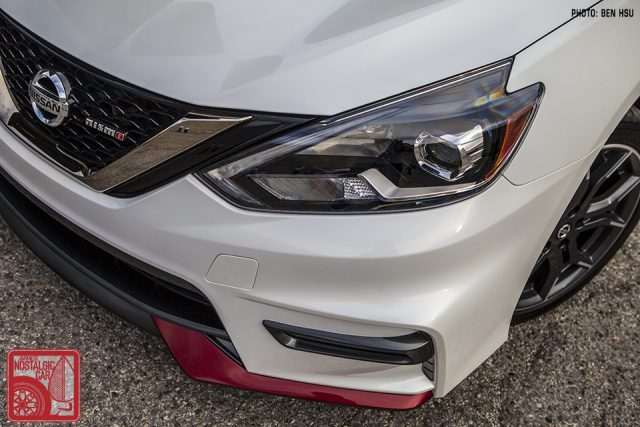 We were promised a never-before seen member of the NISMO family. When marketing director Brandon White got up to introduce the car, he told us a story that will sound all too familiar to enthusiasts of a certain age. 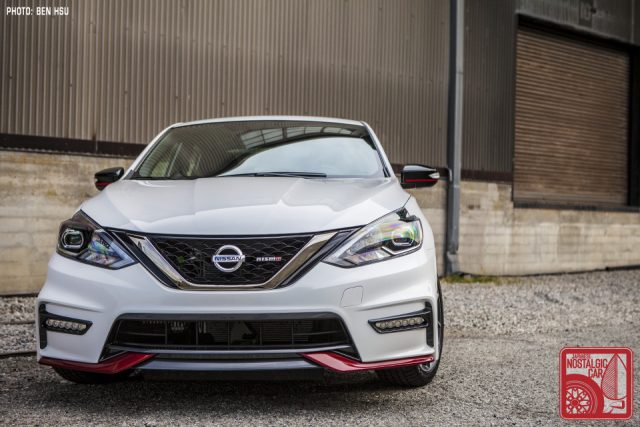 “I grew up in southern California. I came up to driving age at the time when the cool cars were the Sentra SE-R, Civic Si, and Acura Integra. Those defined the go-fast culture of the time.” The Sentra NISMO is Nissan’s attempt at re-igniting that era, with what White calls “a tuner car straight from the factory.” We were then let loose on Dom Toretto’s mean streets in a pearl white Sentra NISMO. 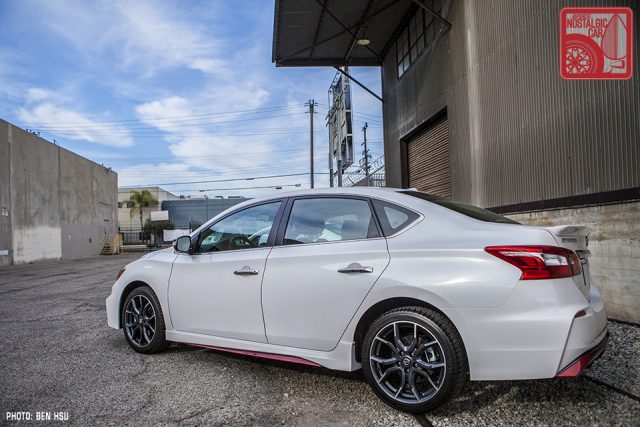 The thing is, the F&F films’ always had a stigma. Their so-called car talk was cheesy as hell and they spawned a million horrid Erebuni-clad wannabes, making them hard to fully embrace. Rowing through the Sentra’s six speeds at each green light while LA’s glass towers loomed in middle distance, however, a strange feeling washed over us. Suddenly, we did feel like characters from the original F&F, hustling for pinks and stolen VCRs. Maybe it was the LA backdrop, maybe it was Brandon’s words, or maybe it was the fact that — even though the movie is from 2001 — the snapshot of culture it depicted is already nearing the 25-year mark. In any case, we felt the pang of JDM tyteness. 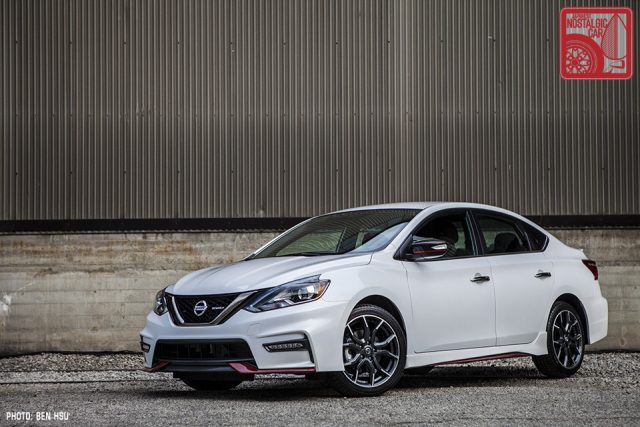 On paper the Sentra NISMO would seem to, in Vin Diesel’s immortal words, “smoke” the tuner favorites of the era. It has 188 horses on tap and a factory turbo, plucked straight from the Juke NISMO’s. Do you know how many grandmas we would’ve killed for a factory turbo and six gears back then!? 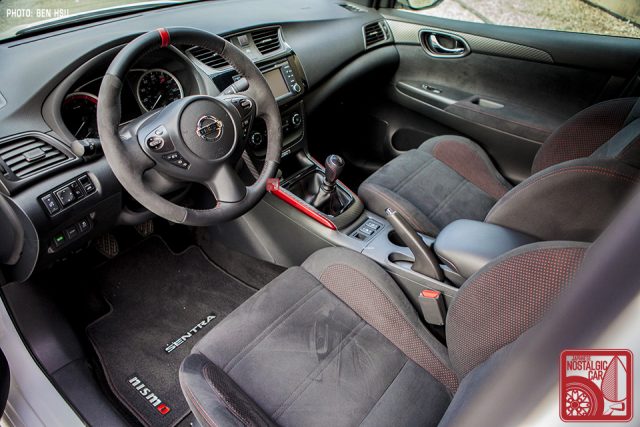 On the road, though, something’s missing. It feels just a bit too disconnected, the steering vague and handling seemingly passing through several down comforters before reaching your senses. Nissan’s most memorable Sentra, the B13 SE-R, handled like a mofo and had a host of real performance upgrades to separate itself from the A-to-B ones. Aside from the turbo, which is admittedly peppy, this one doesn’t have enough to distinguish it from the regular Sentra. 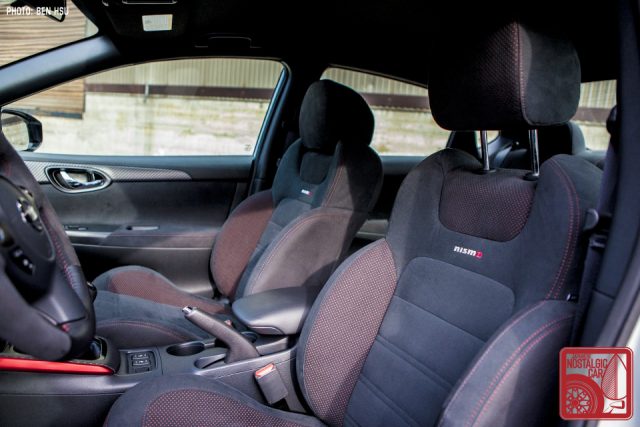 It definitely doesn’t have enough to call itself a NISMO. White says the Sentra has been a very, very good seller in the compact segment, but that the buyers have been primarily commuters. The job of the Sentra NISMO is see if it the Sentra model can capture a few more buyers that lean towards the enthusiast side of the spectrum.

It sounds like a good reason to make the car, but if that’s what you truly desire there’s already a Sentra for that. The perfectly respectable Sentra SR Turbo unveiled a couple of months ago has the exact same 188-horse drivetrain, which means the Sentra NISMO is essentially an appearance package. 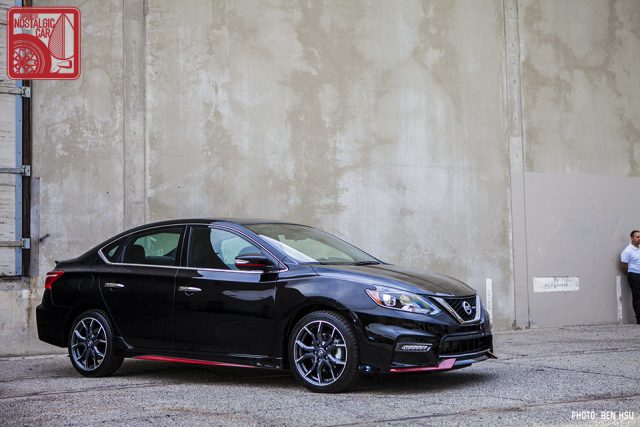 Yes, we know that back in the day many self-described tuners were basically slapping on body kits and fake Type R badges without doing any actual tuning under the hood, but that’s not the nostalgia we should be fond of. NISMO created the Z-Tune GT-Rs and JGTC racers, for chrissakes. The NISMO name still carries weight among Nissan loyalists. Let’s not dilute it. 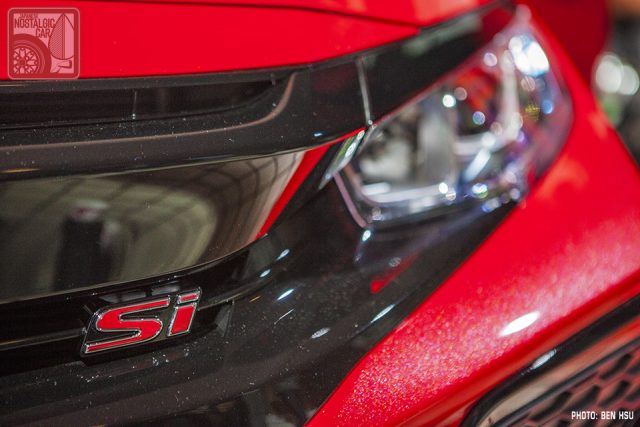 A few hours later and a mere two miles away, Honda was also gearing up to bring back a Tuner Era moniker of its own: the Civic Si. The environment was less gritty, with Honda opting for an indoor event space, but Honda knows the importance of launching its iconic performance model in Los Angeles. 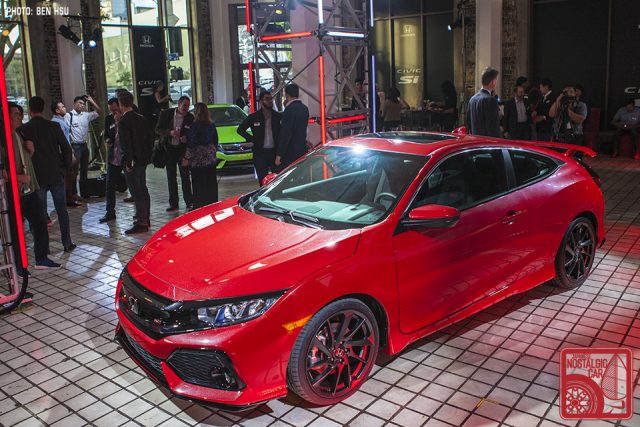 The Tuner Era was absolutely dominated by Honda, from the CRX to the NSX, and in most areas of 1990s LA they were the de facto dream cars of young enthusiasts. The Si was the top-of-the-line Civic, an aspirational model when the Type R was beyond reach. Thus, it may seem strange for Honda to make an Civic Si now, especially considering that the Civic Type R is coming to US shores soon. 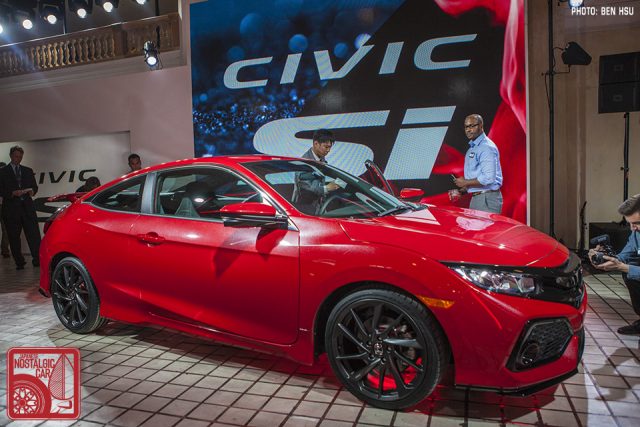 We think it’s a good move, though. The CTR is rumored to make excess of 300 horsepower, while the regular Civic makes 174. That leaves a huge gap in both performance and price, and the Si will slot somewhere in between. Besides, the Si name still resonates with those who remember when VTEC first kicked in, yo. 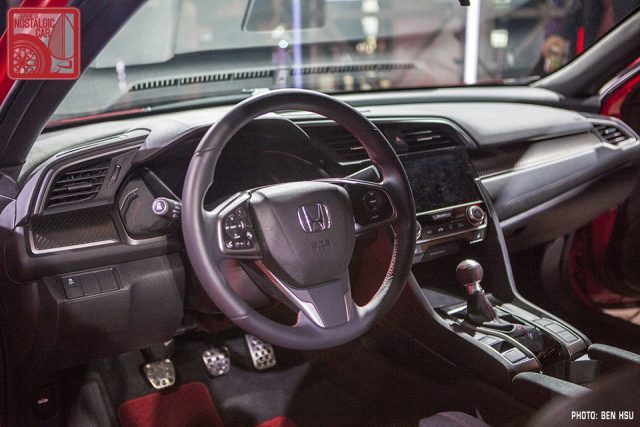 Honda declined to disclose actual power figures, but have acknowledged that it will have more horses than your run-of-the-mill Civics. It’ll also have an LSD and the option of cross-drilled brake rotors — usable performance upgrades that set the car apart. 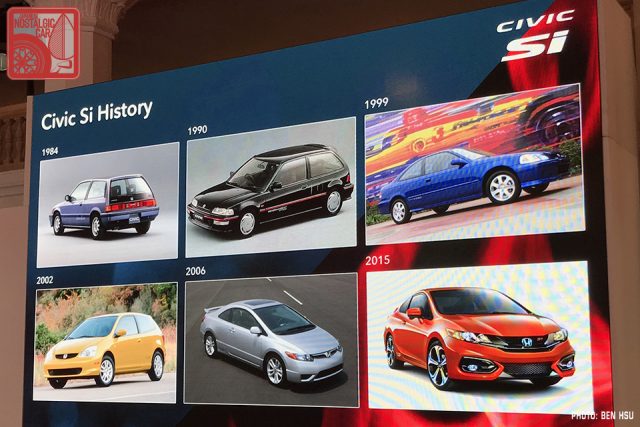 Honda has always had a little trouble connecting with their enthusiast legions, though and this launch was not without its hiccups. A presentation slide showing “Civic Si History” was instantly excoriated by our Instagram followers for showing a JDM SiR in the EF generation and omitting the EG Si altogether. 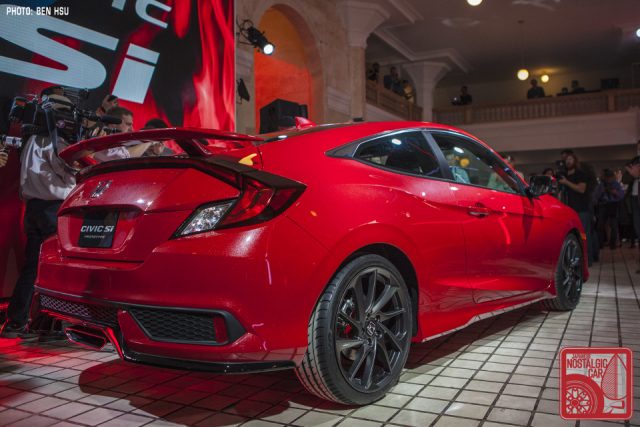 There’s also the small matter of the Si badge, which appears on the grille and not the back. To the untrained eye, Si Civics didn’t look all that different from good ol’ EX models of old. Once you saw that little red emblem on the back, though, you knew it was something special.

The Honda personnel we talked to said that the car shown is still a prototype, so the possibility of a badge on the rear where it belongs is a possibility. Even the paint, an iridescent Rallye Red Pearl, is not stock. The wing, too, is not production and it won’t come with the 19-inch Honda Factory Performance wheels (though they will be a dealer option). 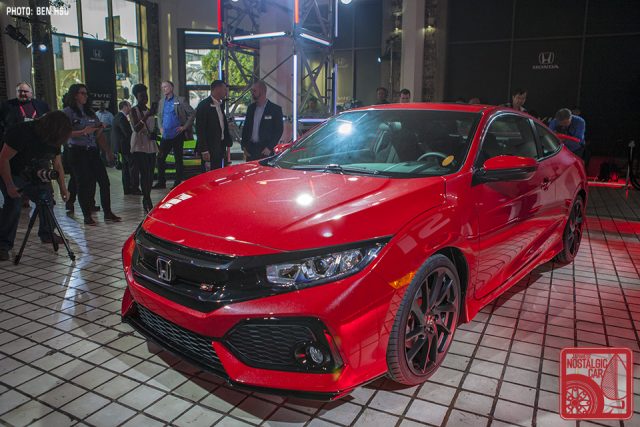 Sadly, while coupe and sedan versions will be available, there won’t be a Civic Si hatch for now. Overall, though, the Civic Si looks like a promising effort. The regular Civic is already a quick accelerator and communicative handler; the Si should return to the EK-era heyday while the Type R remains the focused track weapon. 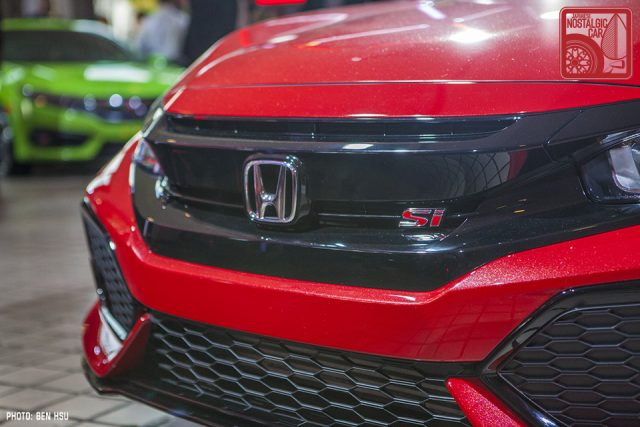 With Nissan and Honda tapping into our memories of the 90s, what’s next? A return of the Impreza 2.5 RS or a Celica GT-S? As our editor-at-large Ricky Silverio put it, “I hope they can revive that culture for new generations and maybe inspire those who grew up in the 90s import scene to revive a aftermarket segment again.” The timing is good. Will the fans follow?