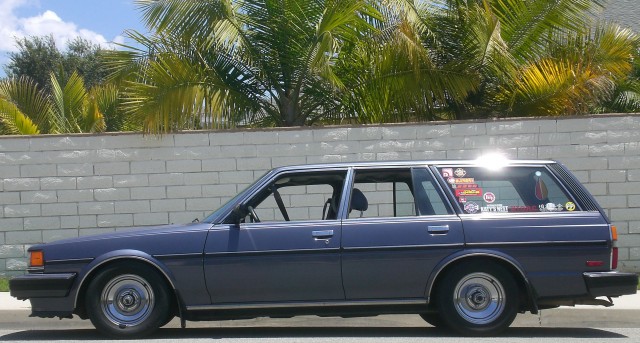 A bone stock 1986 Cressida Wagon is a lanky beast, in desperate need of a slam. We’ve had low-down springs on our JNC Wagon for a while now, but 23-year-old shock absorbers meant we were bobbing like a Halloween apple over every undulation in the road. It was time for some new shocks.

Old Japanese wagons are downright bitchin’, but they can also be a bitch to find parts for. We wanted some no-hassle off-the-shelf parts that were guaranteed to fit. Unfortunately for us, the MX72 isn’t exactly a common platform for aftermarket goodies here in the States. When all else fails, though, going with an old school JDM giant is a pretty good bet. Tokico‘s been around since 1937 and, wouldn’t you know it, they’ve got plenty of support for old Toyotas and other nostalgics as well.

A couple of weeks later, the UPS man dropped off a fresh new set of Tokico blues. What followed was a moderate-difficulty upgrade that almost anyone can do, with only one instance of blood drawn when an errant alligator lizard ran into the garage (technically not part of the install).

One of the first things J-tin owners do is lower their ride and we were no different. In our haste to go low, we threw on a set of RS-R Ti2000 Down Springs ordered from Japan. Meant for a Mark II Wagon, RS-R doesn’t sell them in the US.

Why go through the trouble? First, because you should never heat your springs to compress them, unless you enjoy the danger and excitement of having random, snap-prone weak spots in your coils. We couldn’t very well cut the stock springs either because my own personal philosophy forbids me from making any irreversible changes – hey, you might see this 1986 Cressida Wagon at a Concours D’Elegance in 20 years, you never know! 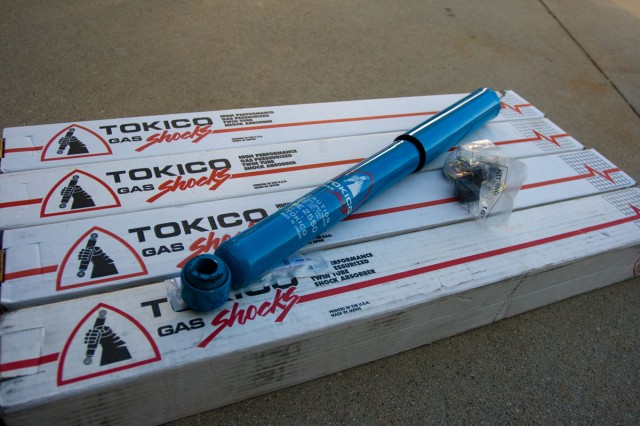 Coupled with ancient stock shocks, however, the car heaved like an ocean liner over every minor road irregularity in its path. This meant the tires weren’t maintaining surefooted contact with the road (rather unsafe) and that we had to constantly supply passengers with Dramamine and sick bags. The Tokico HP Series, known as “Tokico blues” due to their trademark color, are an inexpensive performance option that’s stiffer than stock yet not kidney jarring – perfect for our daily driven JNC Wagon. 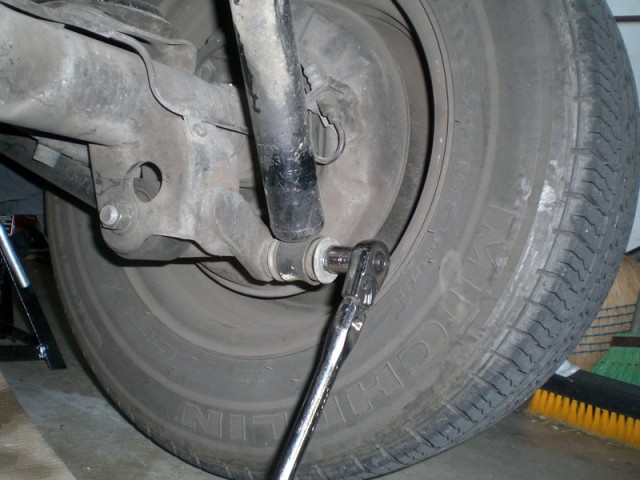 As part of our ongoing doctrine to do the easy part first, we started with the rears. This was beyond simple. Only two fasteners held each rear shock in place. The lower ends were easily accessible from under the car and we didn’t even need to take the wheels off.

The fasteners on top were accessed from inside the car – an unfortunate turn of events, because that meant dealing with trim. In our case, several of the plastic screws holding the taligate sill were stripped and had to be drilled out. Destroying this kind of stuff on an old car is always a scary proposition, especially when they’re in odd colors like our 80s-tastic blue.

You never know what you can still get from Toyota and we’ve found that sometimes they’ll discontinue all colors but black. Luckily, we discovered that blue screws were still available from Cabe Toyota for a buck a piece, but we’ll have to wait till our order comes in to see if the color actually matches. 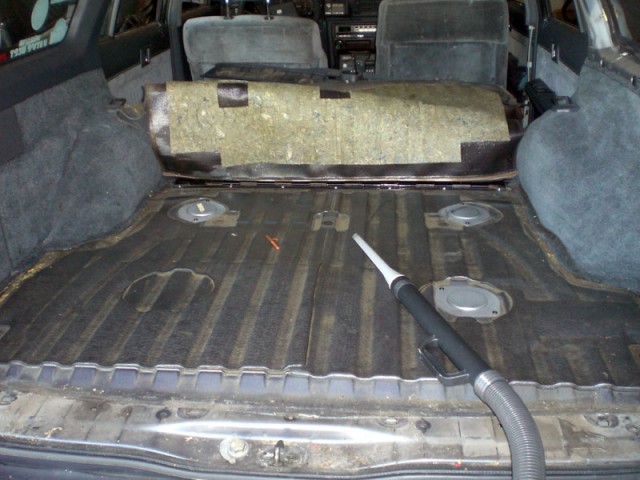 Peeling back the carpet revealed the shocks’ two access panels (by the wheel wells) and a long-lost Lego sword from the previous owner. We took the opportunity to vacuum up some assorted food particles that had been fermenting long enough to spawn their own offspring. 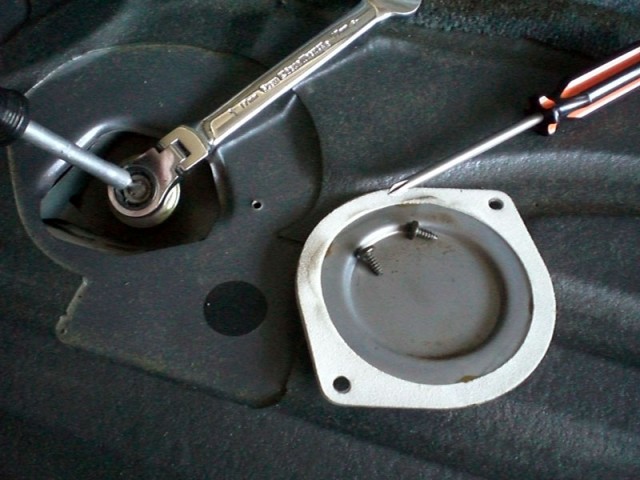 Wrenching on the shock’s lock nut simply spun the piston shaft freely. Fortunately, the wise ones at Toyota notched the shaft so we could use a large-ish flathead screwdriver to hold it in place. Similarly, the Tokicos have a squared off tip you can use vise-grips on. 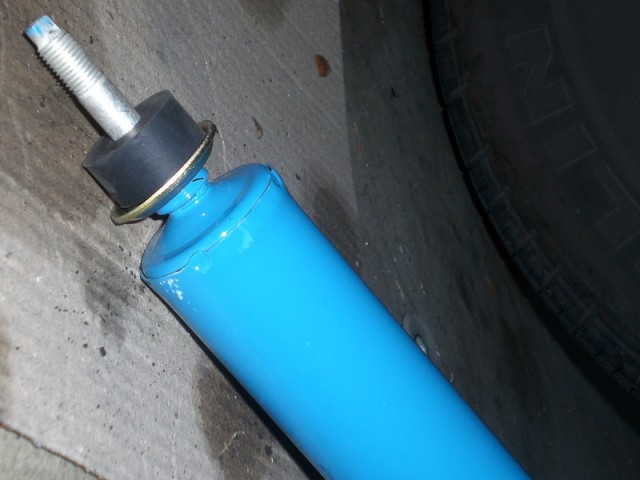 The Tokicos came with all new bushings, retainers, locators (a beveled ring that helps center the shock) and nuts, along with an easy-to-read diagram showing the proper order in which to shishkabob them along the shaft. A few turns of the wrench later and we were done.

Here’s what it looks like now up Cressida’s skirt. That MkI Supra rear axle is a direct bolt-in as long you cut your lateral bar or get an adjustable one like our TC Sportline unit.

The fronts were a tad tricker and required the removal of the entire strut. However, the first order of business was taking the brake hose out of its perch on the strut. Now, I know I said I’d never make any irreversible changes, but thanks to this surprisingly poor design we had to violate the Prime Directive.

See, once we removed the clip (left), it was revealed that the brake hose was completely enclosed (center) by metal! Why did Toyota want us to disconnect the hose – and thus bleed the brakes – just to do some work on the strut? Consider getting out the ol’ angle grinder and cutting our way through (right) a form of kaizen.

Normally we wouldn’t mess with anything, you know, related to the brakes, but many cars have this pass-through straight from the factory. And when the clip is snug, the hose is landlocked again anyway so we feel pretty safe doing this. Just make sure John and Kev carry on the JNC torch if we plunge off a cliff. And yes, this does means we’ll have to get some spare OEM strut housings at the next junkyard crawl in case that 2029 Concours ever comes around. 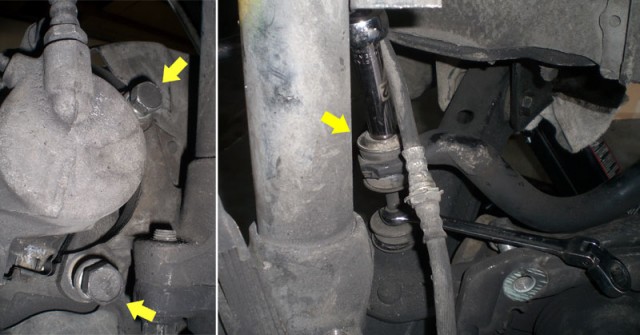 With the brake hydraulic system still fully sealed, we then undid the two bolts holding the caliper (left) onto the steering knuckle and hung it on the tie rod to get it out of the way. We also had to detach the sway bar (right) to get the control arm low enough for strut extraction, but your suspension may vary.

Next, we undid the bolts on either side of the strut support (left), followed by the three nuts atop the strut tower. 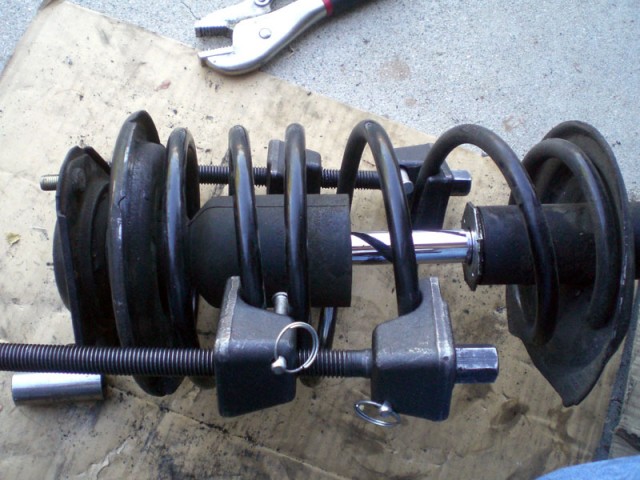 And voilá, the strut was free as a bird. Here’s where you need to be careful, though. The spring is one tough coil of twisted metal, strong enough to keep one corner of a two-and-a-half ton steel slab from crashing down onto the pavement. In other words, it packs a wallop.

There’s enough energy stored in that spring to crack a rib cage, so proper use of a good spring compressor is a must. You have been forewarned: If you end up with a newfound orifice in your chest – or even so much as a papercut –  as a result of our how-to JNC is not responsible. So, yeah, don’t sue us. Intrepid souls can find spring compressors for rent, free of charge, at most local auto parts chains. 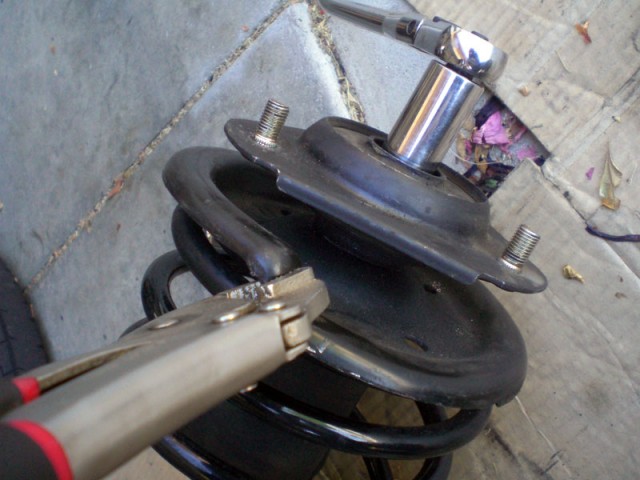 With the spring properly compressed we unfastened the lock nut at the top holding the whole shebang together. There’s supposed to be a special tool to keep the spring seat in place as you turn the lock nut, but once again the vise grips showed off considerable and diverse talents. The step seemed to be the best clamping spot for maximum leverage.

Nothing to see here, just making note of the correct order. 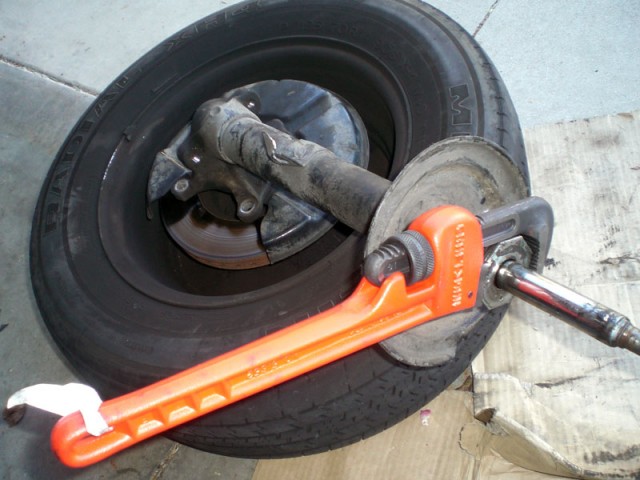 To get the actual shock absorber cartridge out of the housing, the large hexagonal ring nut needed to come off. Again, there’s a special tool for this but hey, we’re not made of money. A plumber’s wrench made a nice, cheap substitute. This ring nut was a tight little sucker, so we put the wheel back on and stood on the tire for leverage. 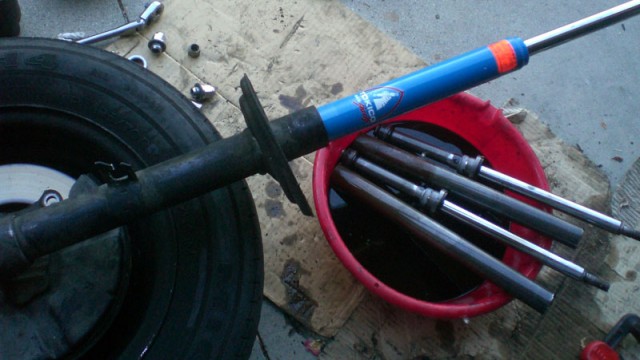 The tire also gave us something to brace as we yanked the old cartridge out, shooting a plume of oil with it. And with that, we were finally done disassembling everything that needed disassembling. We slid the new Tokicos into the strut housing (it’s a pity that shiny blue paint will be forever shrouded) and began putting everything back together again.

Just a few notes on the reassembly. The bearings in our strut supports looked pretty dry so we repacked them with fresh blue grease. Also, the vise-grip trick on the upper seat didn’t work as well during reassembly due to its angle, but it was doable as long as the squared off section of the shaft was keyed into the seat.

So how does the car drive as a result? Noticeably better! It no longer gets tossed around by the slightest swell in the pavement, for one. With the stock shocks, the tires routinely scraped the fenders on hard turns or over dips, but that’s been greatly reduced as well. Even the mighty Botts’ Dots don’t vibrate our teeth like a dentist’s drill anymore. By golly, the ol’ wagon feels far more planted both in corners and on straights! It makes us wish we hadn’t waited so long.

Oh, and we weren’t making up the part about the lizard. Here’s the little guy just cold chillin’ on the wagon. Don’t worry, we let him go after this photo was taken. 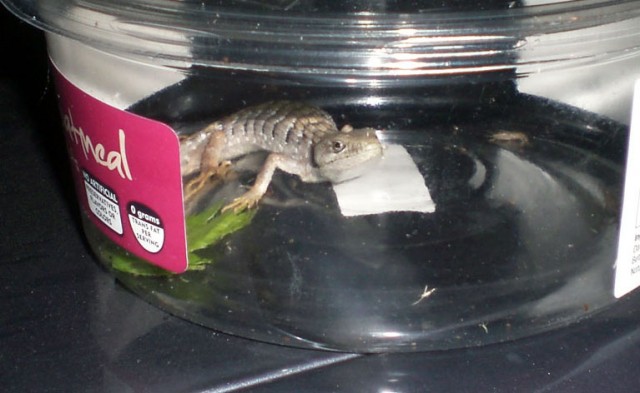