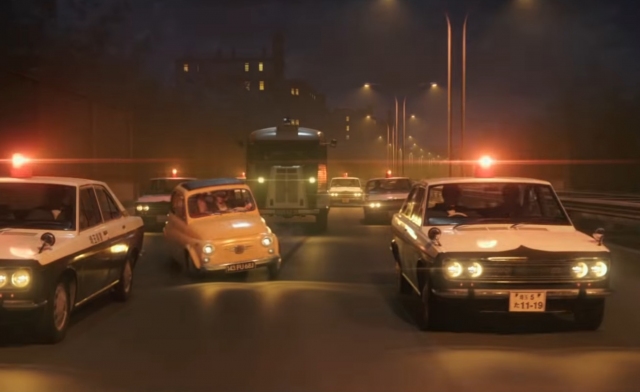 The first computer-animated Lupin III movie arrives in US theaters this week. The film looks beautifully rendered, and promises all the madcap shenanigans that generations of viewers have grown up loving. Cars have always been a big part of the Lupin universe, and as such no Lupin story would be complete without some automotive hijinks. So, here’s the full car chase from Lupin III: The First.

If you’re not familiar with Lupin III, it’s the part-Japanese descendant of Arsène Lupin from of Maurice Leblanc’s early 1900s stories about a master thief. Along with his comrades, the expert marksman Daisuke Jigen, samurai Goemon Ishikawa, and sometimes-rival sometimes-love interest Fujiko, he travels the world to steal valuable treasures while being pursued by his nemesis, Interpol agent Koichi Zenigata. But, that’s usually just the preface for a greater adventure. In the case of Lupin III: The First, that’s something involving Nazis.

Although Lupin has driven a number of cars in the many forms of media he’s appeared in, his most memorable has been yellow a Fiat 500. In 2009, Fiat even produced a Lupin III Edition of the car based on the new 500 Abarth, and apparently the yellow Fiat named Luigi in Disney’s Cars series was an homage to Lupin as well.

In this car chase, we see the Fiat take on a cadre of Nissan Bluebird Coupé (but with four doors) police cars and a Citroën H Van. You’ll have to suspend disbelief when Jigen shoots the nuts off a road sign while driving, Goemon slices a car in half engine and all, and the Fiat pulls the classic move of driving in reverse at highway speeds, but it’s no less crazy than anything in the last three Fast & Furious installments.

The US release of Lupin III: The First will be dubbed in English and will have a limited theatrical schedule this week, then appear on-demand on digital platforms December 15. It will be available on Blu-Ray in January of next year.