One of the more fondly remembered classic cars in Japan today is the Isuzu 117 Coupe. An FR design, it debuted in Japan as an Italian-designed, DOHC sports coupe with an exotic pricetag to match.

A JDM car with an extraordinarily long production run (1968~1981), its swoopy European looks have ensured that the 117 still has widespread classic car appeal, long after Isuzu stopped producing cars.

It’s difficult to write about the 117 Coupe without at at least having something to say about the Isuzu company itself. Because of course, Isuzu no longer exists as a carmaker. Today, it is a very successful maker of trucks, but it turned its back on the passenger car market a half-decade ago. Isuzu’s last in-house designed cars were last sold in 1992, and after that, Isuzu would only sell its Trooper SUV and rebadged Subaru Legacies and Honda Accords as the Isuzu Aska.

So the music died at Isuzu a very long time ago. It was always the smallest player in the Japanese market, but in its 50yr history as a car maker, Isuzu did manage to put out some memorable cars. One of which is the 117 Coupe. 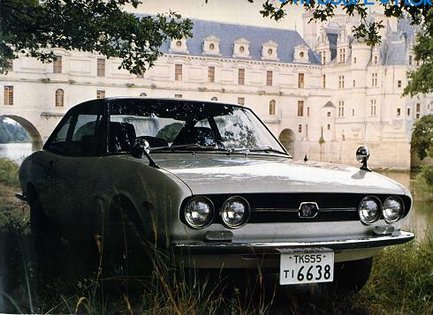 Isuzu started out making Hillman sedans under license, so the first real Isuzus were the Bellett sedans. Conventionally engineered, they were neatly styled FR sedans and coupes, and the DOHC GT-R version of the Bellett GT found success on the race tracks in the late 60s (well at least until the Hakosuka Skyline came along). 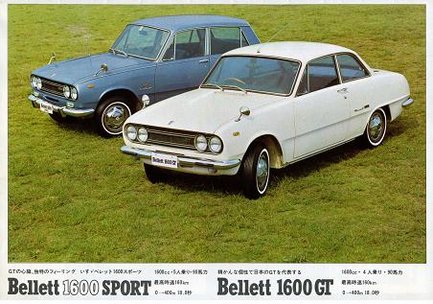 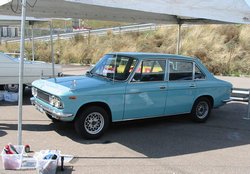 The Bellett was replaced in 1967 by the less interesting looking Florian (left), which outside of Japan, is probably best known for its pickup version, which was sold in the USA as the Chevy Luv and did very well there during the mini-truck boom of the 70s. But in 1966, Isuzu displayed a concept car at the Geneva Auto Salon, and it was based on the Florian chassis.

Sleek and distinctly European in character, the 117 Coupe had been designed by Italian coachbuilder Ghia, and was penned by none other than famed designer Giorgetto Giugiaro. Giugiaro went onto form his own design firm, ItalDesign, and has been responsible for some of the most influential and beautiful shapes in motoring history, like the Alfa GTV 105, BMW M1 and Lotus Esprit, to genre-defining cars like the original VW Golf. For Isuzu, he penned a wonderfully sleek and balanced coupe shape, and he didn’t hold back his best ideas, because when he later designed the Fiat Dino (green car just below), it had many similarities with the earlier Isuzu. 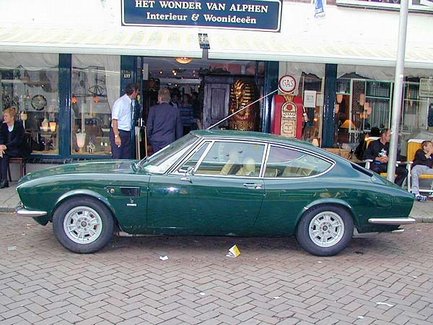 Based on the Florian sedan, it was a very simple FR chassis weighing 1050kg. Initial versions were powered by the DOHC 1600 motor from the Bellett GT-R racer, and 120ps was enough to power the 117 over the quarter mile in 16.8s, on the way to a top speed of 190km/h. In its day, its fastback design was lauded as being both sportily attractive and very practical (eg the rear seats folded down to extend the bootspace), a unique proposition in the Japanese market at the time.  Suspension was double wishbone front and live axle rear suspension.  Isuzu made the most of the simple layout by balancing the setup more towards comfort than sharp handling and so the 117 was known for offering a very civilised urban ride. 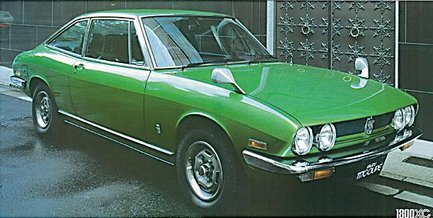 Isuzu in those days didn’t really have any spare production facilities to dedicate to 117 production, and so for the first few years of production the 117s were largely made by hand. This in part explains the rather high price. At Y1.7 million, it was an extremely expensive high end Japanese car in its day. Compare that to Y2.4mil for the Toyota 2000GT and it doesn’t seem so bad, but the 117 Coupe was still more expensive than the Y1.5mil C10 Skyline GT-R and in those days, a sporty family car like the Skyline 2000GT was only Y0.8mil. So the 117 Coupe was not cheap and this held down production numbers to about 50 a month, and in the first 4 years of production, only 2500 were sold. 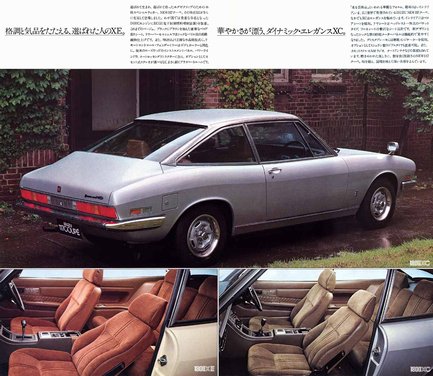 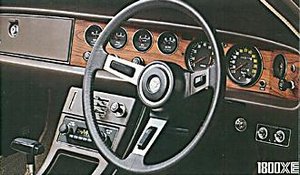 In those early years of production, the 117 certainly did have a bespoke handbuilt feel to it, with a wooden dash full of gauges and a Nardi-style wooden wheel and a general sense of quality. But in 1974, the 117 entered into a different phase.

Now in proper series production, Isuzu’s output of the 117 increased to as much as 13000 per year. In an effort to drive down the retail price to a level more affordable, the 1600 DOHC motor was supplemented by a cheaper-to-produce 115ps SOHC 1800 running twin carbs, and some content was stripped out of the interior, with the lower-priced models losing the wooden dash and gaining chaper, plainer materials and as a result the 117 lost a lot of its bespoke appeal.

There was even a 73ps diesel version, but the range of engines offered swelled to 2.0L in the final years of production, with the ultimate version being a 135ps injected DOHC.

Along the way, the 117 gained square headlights instead of the original round items, in an attempt to keep its sales level up until it was replaced by the Piazza coupe (also a Giugiaro design) in 1981. Sales peaked in 1975 (6yrs after it was introduced) but right up until the last year of production, sales were still healthy and there was even a modest waiting list. 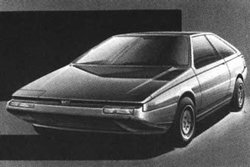 After 12yrs and almost 100,000 sold, the 117 bowed out in 1981, to be replaced by yet another Giugiaro design, the needlenosed Piazza. Based on the Ace of Clubs concept car, like the 117 before it the Piazza was based on a sedan chassis, the Gemini.

Power units were a 135ps 2.0L DOHC and a 150ps SOHC 2.0L turbo four, and so with the turbo version especially, performance was certainly up to the Starion/Supra level at the time, but the Piazza debuted to wildly differing reviews. European and US magazines would report that the Piazza was in a similar mould to the Mitsubishi Starion, which was to say that it was a decently performing and handling coupe (if somewhat old fashioned). However the Piazza would receive scathing reviews in Australia where it was sold as a Holden. Australian magazines unanimously panned the live-axled Piazza as poor handling and having bad braking, to the point where Holden reduced the price by 20% (and refunded the price difference to existing buyers!). 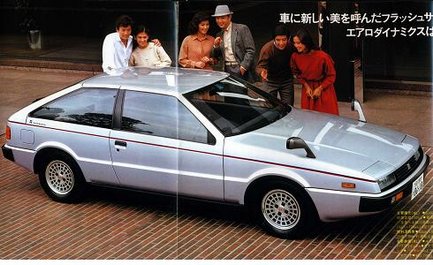 The Piazza never recovered from the media pasting and was withdrawn from the Australian market shortly after and in Australia it has the unfortunate stigma of being somewhat of a lemon. 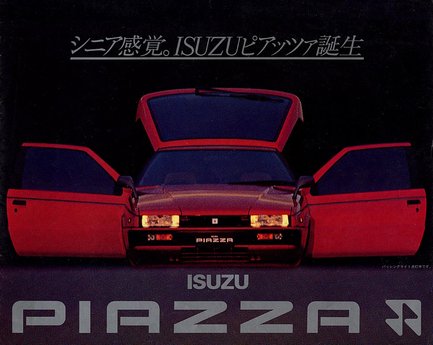 We’re not really sure why the Piazza received such a harsh reception in Australia, but Holden’s over-ambitious marketing for the car (it was 50% more expensive than the DOHC Celica) may have had something to do with setting extremely high expectations that the simply engineered Piazza could never fulfil. But it has to be said that the Australian experience was really quite at odds with reviews with of the Piazza in other countries, where it was reasonably well regarded (if not quite a class leader). And in Japan it’s still thought of as a decent old coupe. 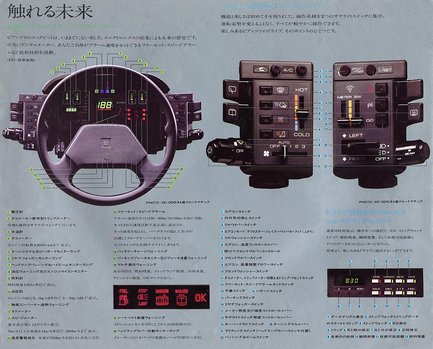 But the Piazza is perhaps a good summation of the 117 Coupe as well: sexy Italian styling, decently powerful engines….crude sedan chassis (after all the 117 was based on a chassis that is best known for being a pick up truck). Good enough in the 70s, borderline acceptable in the early 80s, but as the late 80s dawned, cars like the Mk3 Supra and FC RX7 simply left cars like the Piazza for dead.

To be honest, Isuzu never really had the funds to develop the Piazza nor the 117 Coupe into the proper sports cars their styling deserved, and traded on their good looks for perhaps a little bit too long. The irony is that after the Piazza, Isuzu made a real effort to offer cars which were dynamically up to date, including the FWD Piazza Pa-Nero coupe and the last-model Gemini (which was available in AWD turbo intercooled form), both good cars which were well regarded. In the late 80s, Isuzus even received some chassis input from Lotus (and you couldn’t miss it because there were badges that said “Handling By Lotus”) and so in the end even the Piazza was a good handler.

But it was too late and Isuzu pretty much wrapped up its car making division in the early 90s.  A shame.