The latest classic from Japan to get the 1:8 treatment is the Toyota 2000GT. Issued by Hachette Collections Japan, the subscription kit will consist of 100 installments received weekly by mail with a retail price of ¥1999 ($17.25 USD) each. At the end of the nearly two-year project, the completed diecast model car will measure over 20 inches long and will have cost ¥195,401 ($1690 USD).

Those who will have followed the history of these highly detailed subscription kits will know that it isn’t the first 2000GT of this scale. In 2011, the groundbreaking DeAgostini Toyota 2000GT set the trend of 1:8 subscription kits of this depth and detail. Such kits existed before then, but were not as intricate as the 2000GT. For a full lesson on 1:8 scale subscription kits, read our 2015 article on their history.

The Hachette 2000GT kit is new from the ground up, designed with 3D scanning techniques that weren’t available a decade ago. As such, it could very well be the most detailed Toyota 2000GT model kit ever made.

As you would expect from a model of this scale, the hood opens to reveal an extremely detailed replica of the 2000GT’s 2.0-liter Yamaha-built twin-cam straight-six. The doors open as well, in order to showcase a sumptuous interior trimmed, in the 1:1 scale car, with the same Yamaha rosewood used to build their grand pianos.

Like the real thing, the model also side panels in the front fender area. These open as well, revealing an air cleaner and windscreen washer reservoir on the let side, and the battery on the right side. The rear hatch lifts to show a spare wheel and tire under the trunk floor.

The detail continues with a working steering mechanism that turns the front wheels when you rotate the steering wheel. The headlights, driving lights, taillights, turn signals, and even license plate lights all illuminate as well. The pop-up headlights can extend and retract too, just as on the real car. Controls for the lights are activated by remote, which can also instruct the model to play a recording of actual sounds from the engine and horn.

Amazingly, the functions continue to impress once you’ve opened the door. The seatback angle can be adjsuted, as well as its fore-aft positioning. The most astonishing feature, perhaps, are door windows that actually roll up and down. The rear side windows, adjacent to the C-pillars, can be replaced with an alternate open version.

In addition to the car itself, the kit comes with several accessories. A tool kit for building the model itself, consisting of screwdrivers, clippers, mimics the look of the original car’s tool kit, which is also replicated in 1:8 scale. There’s also a box with a 2000GT badge for storing the completed pieces of the car as you await the next installment, and a replica of the serial number plate that can be personalized with your name in the lower right corner.

Each week will also include a pamphlet about the car that can essentially be combined into a book via an included binder by the end of the subscription. A DVD is included as well. Finally, if you choose the option to add ¥300 on top of your weekly subscription starting from the fifth week, Hachette will throw in an acrylic display case.

Hachette has created a video that goes through the car. It shows some of the 3D scanning process, the model’s features, and what the finished kit will look like. Some readers have noted that in past Hachette models the panels in the finished model don’t fit as nicely as they expected, so take note of that if you choose to commit.

A video from Hachette showing the assembly of the grille and headlight section shows just how intricate this model is. Includes the wiring and mechanisms to make the lights pop up and retract, as well as light up. 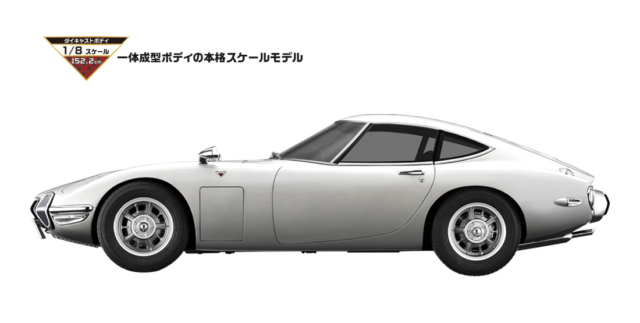 The subscription is only officially available in Japan, but there are ways to get them in the US via your typical auction sites. Of course, that will come at additional cost. If you have the patience (and the wallet) for it, you can add it to your collection, alongside 1:8 models of the Hakosuka Skyline GT-R, Toyota Celica Liftback, and Seibu Keisatsu pursuit vehicle.

permalink.
This post is filed under: minicars and
tagged: 2000gt, Hachette, toyota.