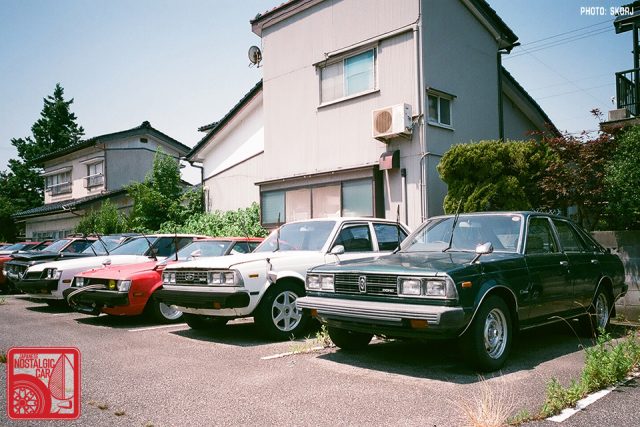 After a longer than usual break between our tours, we decided to take a full week off and continue our Western Coast explorations through the Chubu and Kinki regions. As we embarked, the outer bands of a seasonal typhoon loomed over Japan. We expected some interesting weather and moderate traffic leaving Tokyo on a Saturday (which we usually try to avoid), but also fantastic seafood from the coastal towns, luxurious salaryman hotels, and perhaps some kyusha spotting along the way. We were not to be disappointed, as we found all these and more. 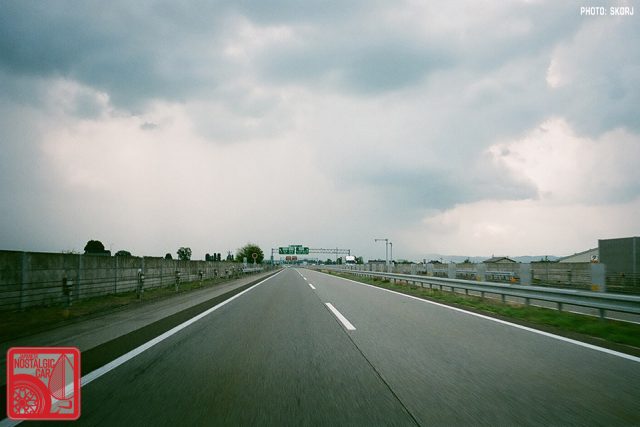 Partially following a a particular Isuzu 117 Coupe‘s previous journey, we headed out of Tokyo towards Japan’s western coast on the Kan-Etsu and Joshin-Etsu Expressways, then drove the single-lane mountain roads of Nagano and Toyama prefectures to the sea, headed west on as many coastal roads as possible, then turned inland in Shimane Prefecture to make our way back to Tokyo via Kyoto-ken. It was nine days on the road in all. 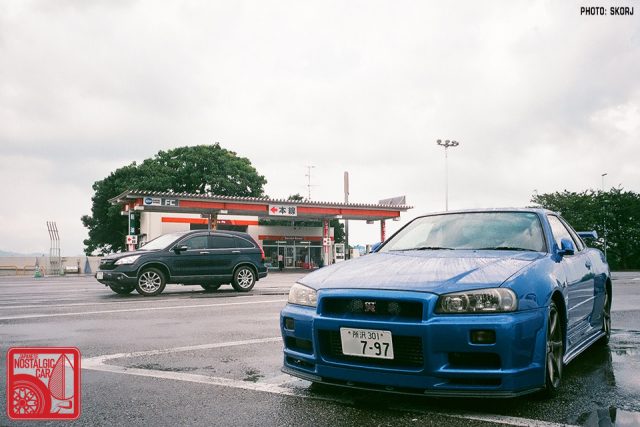 Stopping at one PA for gas on the way north, we admired the purposeful stance of a classic Bayside Blue R34 Skyline GT-R. The rain and the expressway provided a fitting backdrop for one of Japan’s greatest sports cars, and on this hot day we knew its driver was finishing a cold can of Boss Coffee before strapping themselves back into the all-weather turbo monster. After re-joining the expressway, the GT-R passed us a short time later noiselessly, trailing a cloud of spray. 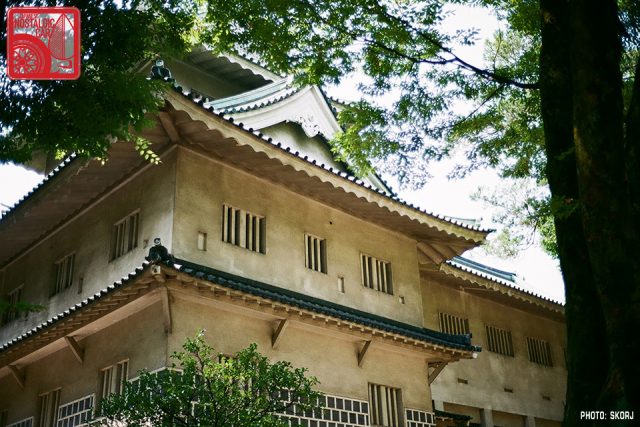 Our first overnight stop was in Toyama-city, and before leaving town the next morning we took a slight detour to look at the reconstructed castle and to chase down at least one photograph of the many Showa-era trams that trundle about the city’s 100-year-old system. 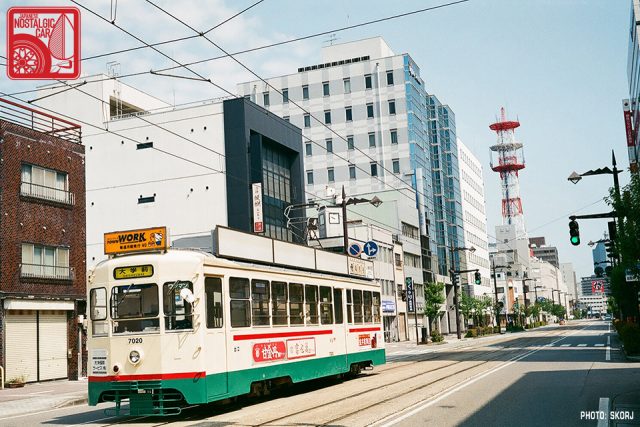 The Toyama City Tram is one of the twenty or so tram systems operating in Japan, and unlike many operating globally, the bulk of their rolling stock appears to be refurbished heritage units, with only a few modern Euro-style behemoths taking up track space. No doubt, tucked away somewhere for special occasions, one or two Taisho-era units also existed. 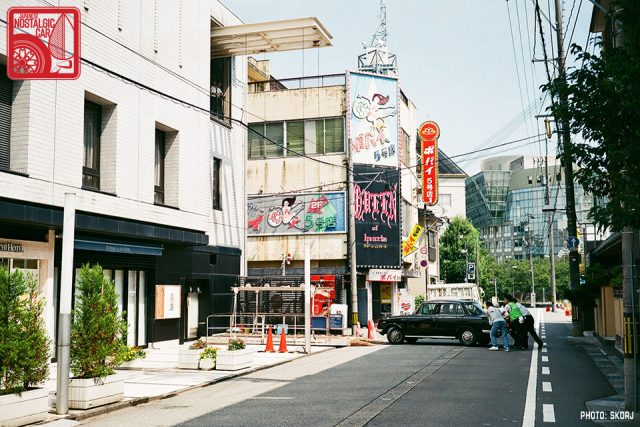 Readers of our other Grand Touring entries will know we try to spend as much time as possible seeking out the obscure and lesser-known places. Exploring the smaller roads, and less well-travelled paths. While in Toyama-city accordingly, we went walking through some of the entertainment district back streets, and were rewarded with the sight of four men pushing an early Toyopet Corona down the road. 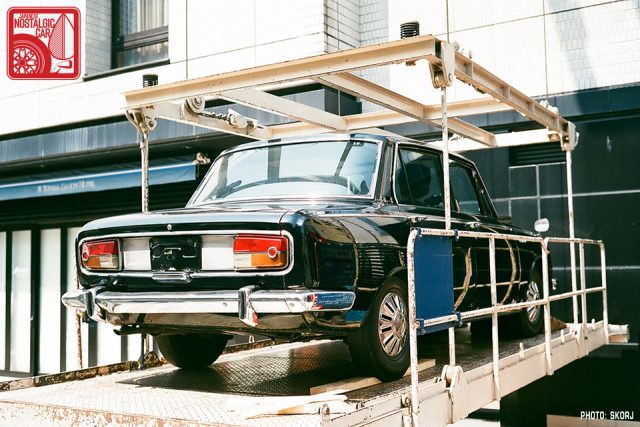 Closer inspection revealed another man behind the wheel, carefully maneuvering the Barikan onto the lowered platform of a third-floor goods-lift gantry. Even in Japan, it was not something you see every day.

With the car carefully secured, we all stood back and watched the little Toyopet slowly hoisted three floors into the air, then retract with an electric whir into its cave. The boss of the maneuvering crew was a little shy, but eventually told us the Corona was part of the local Toyopet dealer’s collection. 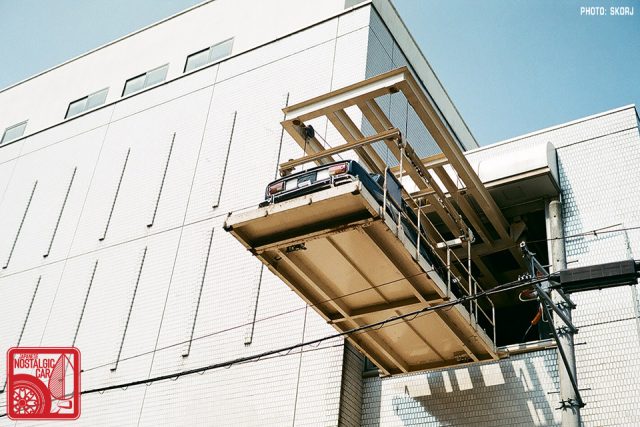 This particular car, though, was a Tokyo Motor Show display vehicle in the 1960s. When we asked what other treasures the upstairs garage held, a quiet “Maybe a Crown or a Corona” was the whispered answer. A solid laugh was given though, when we suggested 2000GT might also have been present. 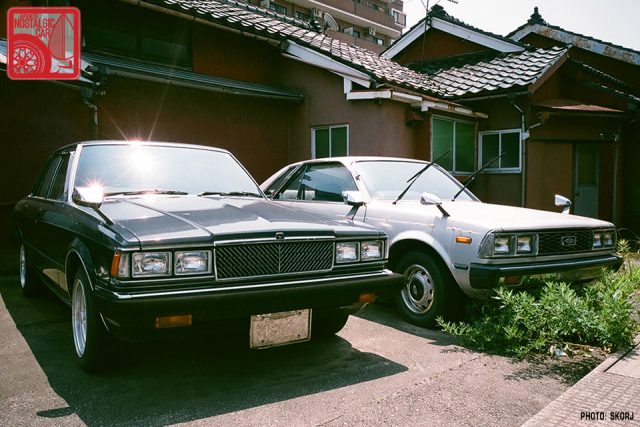 Soon after hitting the road again, we spotted the telltale sign of kyusha — a couple of fender mirror-equipped noses peeking out to the road. A closer inspection revealed a rare 1970s Corona pillarless hardtop sitting next to an X60 Mark II sedan.

This pair however, was nothing compared to the rest of the collection. Stopping for a brief snap or two of a white Mark II Grande quickly turned into a 30 minute, ever-expanding tour of one of the most interesting classic Toyota stashes we’ve seen in a long time. Soon we’d met the shacho of a firm specializing in not only general sales and repairs, but also the restoration and maintenance of Toyota classics. 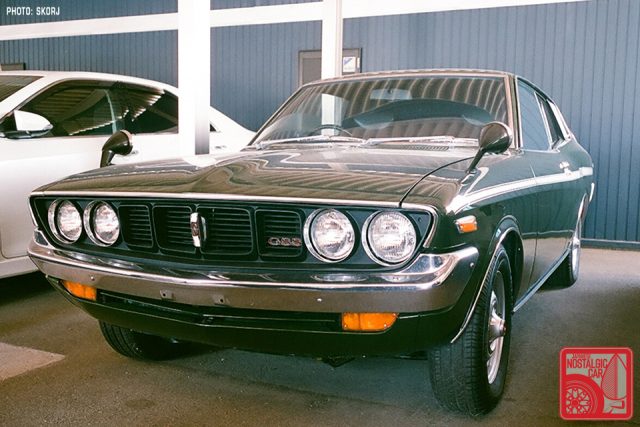 While their workshop held a number of interesting cars undergoing work, it was their on-hand stock and backlot stash that amazed. Cars available for sale included a 1973 Mark II GSS Hardtop in Moss Green equipped with a 5-speed and some very tasteful OEM race-like seats, it was a one-owner car and as minty as they come. 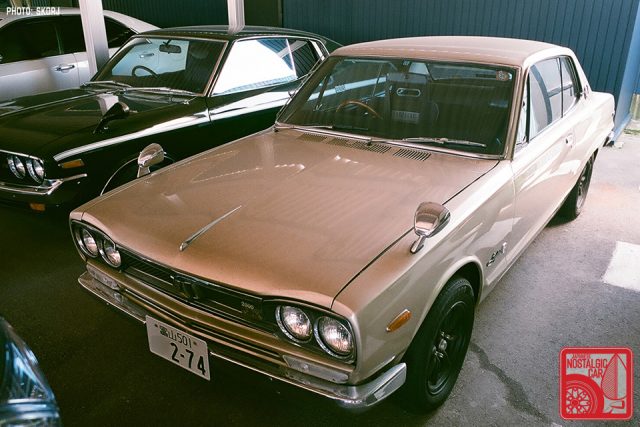 Next to it was parked an amazing example of the Hakosuka breed — a 1972 2000 GT-X, again with a 5-speed, gray Racing Service Watanabe wheels, and no fake wannabe additions like over-fenders or a trunk-mounted spoiler. It looked suitably cool as Nissan intended. 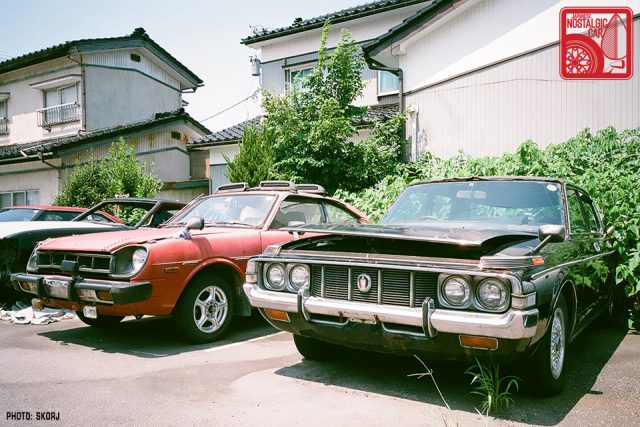 On the backlot things got really interesting. Over 20 cars, mostly Toyota, sat outside waiting for their restorations. The collection included a kujira Crown sedan, numerous Celicas, including a number of rare GT and GT Rally variations, and a period A40 kaido racer with an auxiliary oil-cooler and a Marchal fog lamp, de rigueur due to their very Japanese-like neko logo. 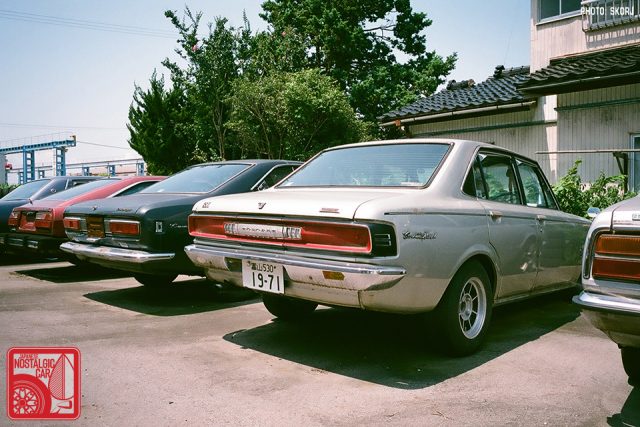 One Mark II sedan, on Hayashi Streets, was particularly rare. Its unique taillights, though sun-bleached, were intact and would clean up nicely with some plastic polish, ensuring that at least one version of this unique model remained on the road. 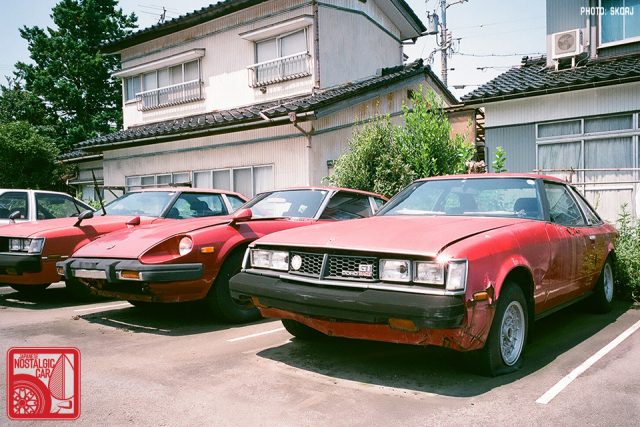 A Fairlady Z or two, twin-cammed Coronas, and a few other rare Toyotas rounded out their backlot. 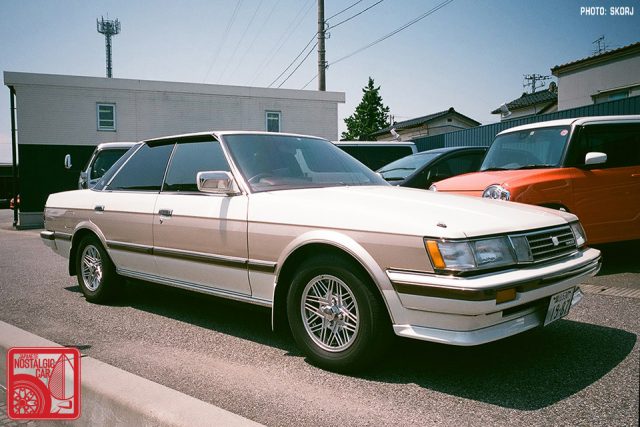 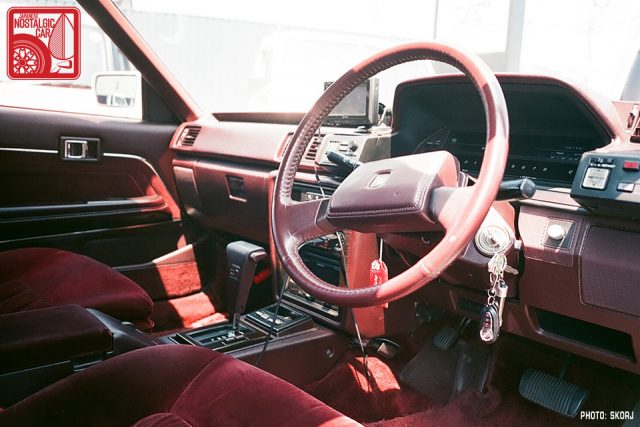 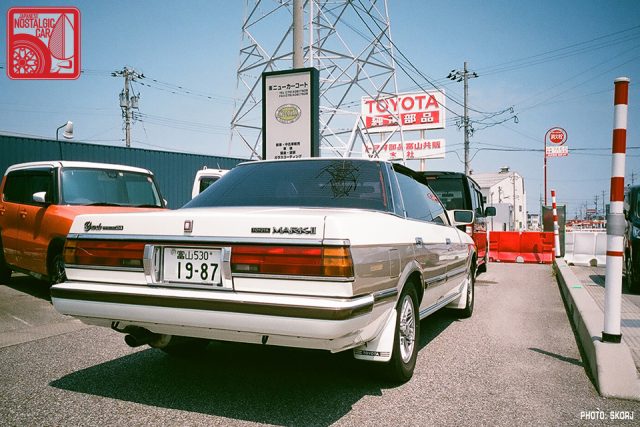 As we left, the shacho showed us his present car, the very oji-san two-tone twin cam, 24-valved, Mark II Grande sedan we had stopped to photograph. With factory mud-flaps, a digital dash, and a magnificent 1980s’ crushed velour interior, it had covered just 46,000km since new. 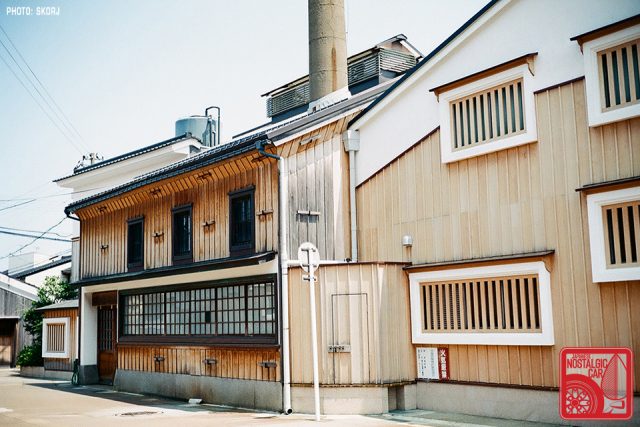 Before leaving Toyama-city, we stopped by the historic port district to photograph a few of the historic buildings. We would soon head further south, leaving the coast for a while. To be continued…