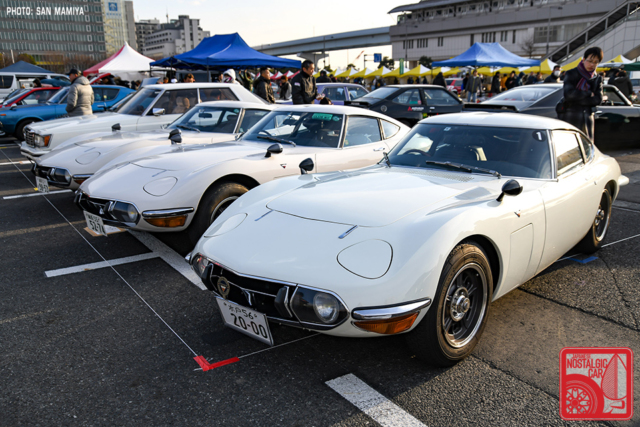 The New Year Meeting is the oldest classic car event in Japan, held annually at the end of January, closer to the lunar new year than the Gregorian one. Having started in 1977, this year marked the 42nd time it was held. This year’s show was smaller than years past, perhaps having to do with the frigid temperatures and cloudy skies, but there was still no shortage of stunning J-tin. 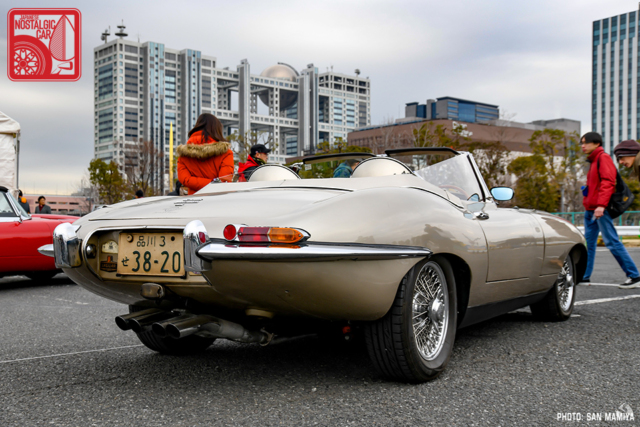 As long time readers know, each year there is a featured marque, typically one of the Japanese manufacturers. This time, though, the theme was British Cars (A nod to Douglas Adams on the occasion of the 42nd hosting of the event? Unlikely, but we’ll pretend it is). However, this E-Type was one of only 13 British cars that showed up to compete for the top prize. 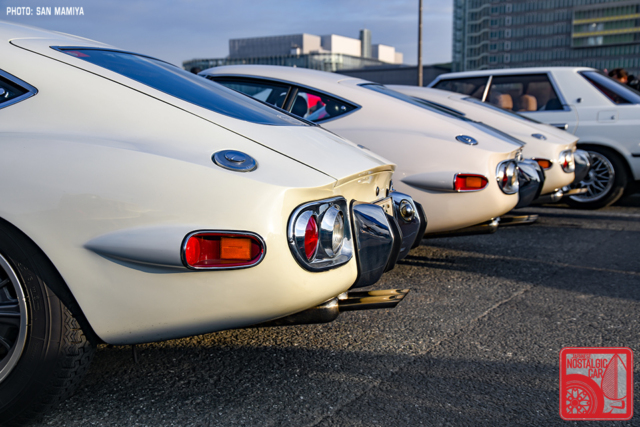 The New Year Meeting has always included cars from all continents. We at JNC have traditionally focused on the home-grown stuff like the Toyota 2000GT club, which  brought out three of Japan’s finest. 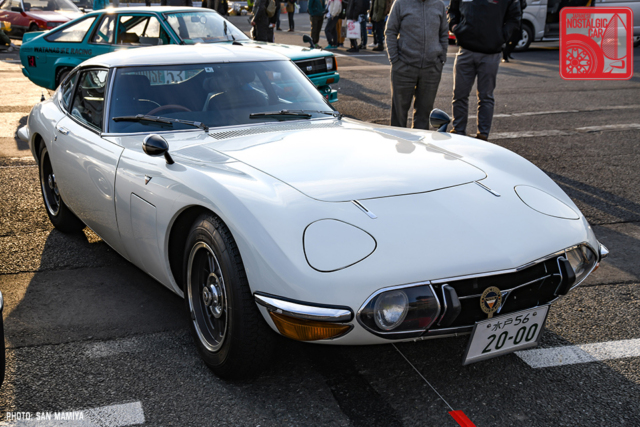 All were kouki 1969 models, denoted by the larger side markers front and rear, updated for US safety regulations, and driving lights mounted flush with the grille. 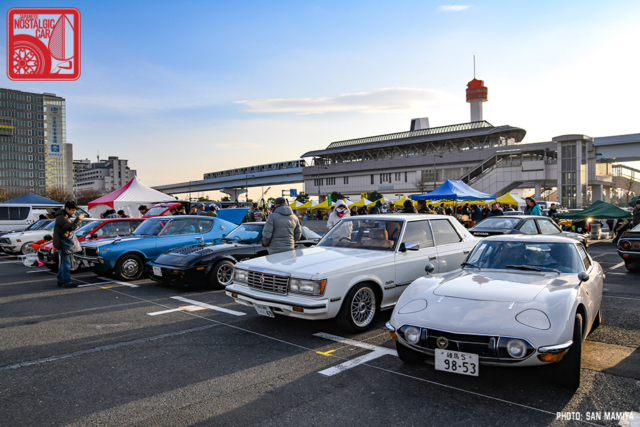 One even wore a “Nerima 5” number plate, denoted by the single-digit 5 above the actual numbers. That means it has been registered in the Nerima Ward of Tokyo since new. 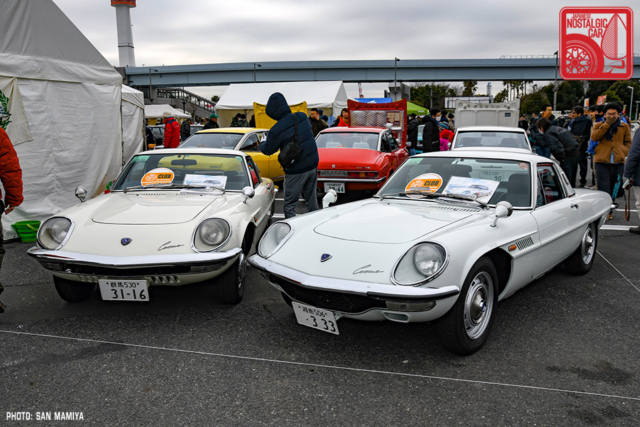 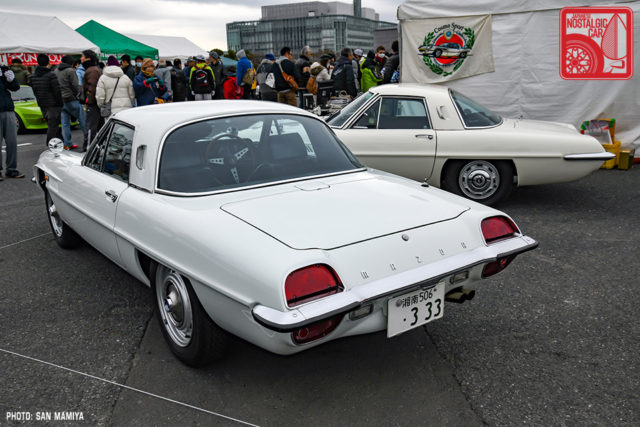 The Mazda Cosmo Sport Club displayed two flagship rotaries, one a short-wheelbase 1967 L10A and and one a long-wheelbase 1971 L10B. You can tell the later one from its wider grille and extra length between trailing edge of the door and the rear wheel arch. 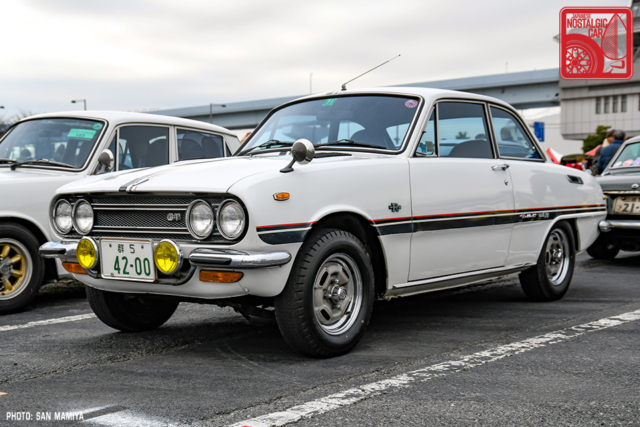 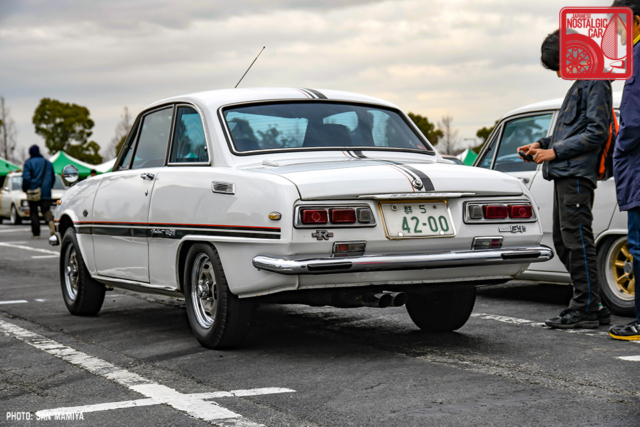 Continuing on the single-digit number plate theme was a 1970 Bellett 1600 GT-R, Isuzu’s twin-cam racing version of its sports coupe replete with period racing stripes. This particular example was wearing rare and era-correct Dunlop G5 racing tires from the 1960s. 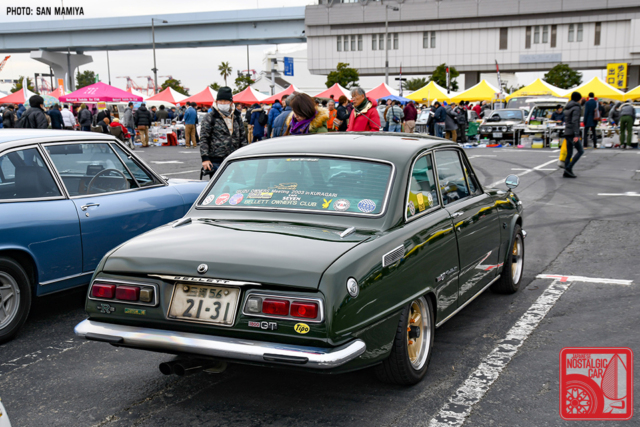 Another Bellett GT-R, a bit less stock on a lowered suspension, rounded out a decent turnout of Isuzus. I think we can all agree that having a number plate (in Japan you cannot remove it once the licensing department fastens it) with actual patina is quite impressive. 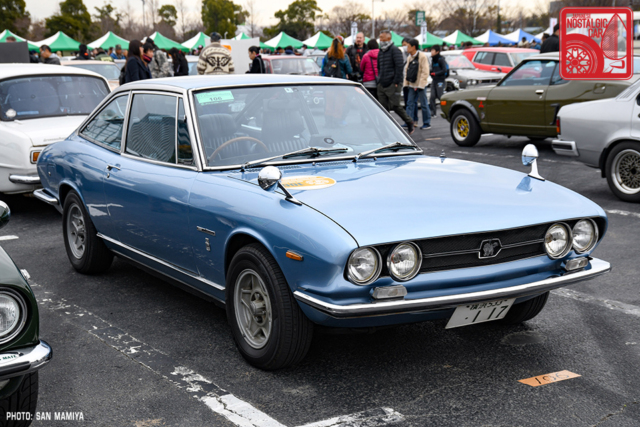 An early, hand-built Isuzu 117 Coupe in a most fetching shade of blue made us wish Isuzu still built passenger cars. 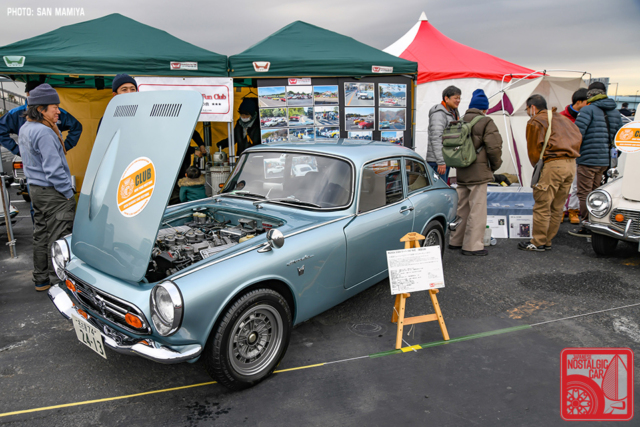 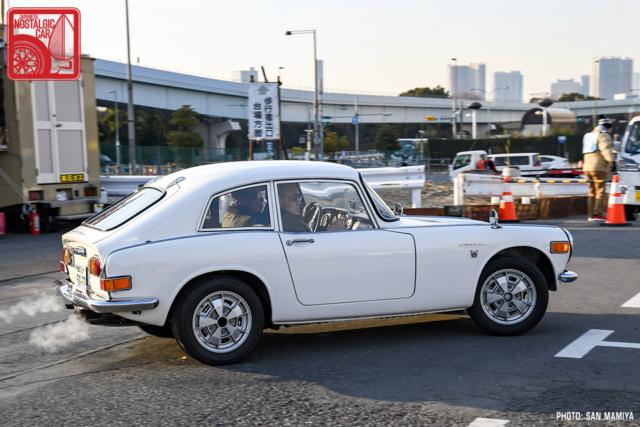 The Honda Sports Fun Club was just one organization devoted to vintage Honda S-Series cars. It drew out high-revving coupes, with a finely restored teal S800 on display and a rare left-hand-drive S600, complete with export-market side marker lights. 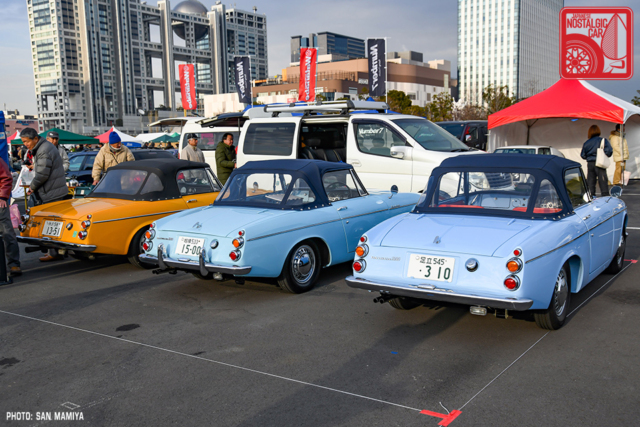 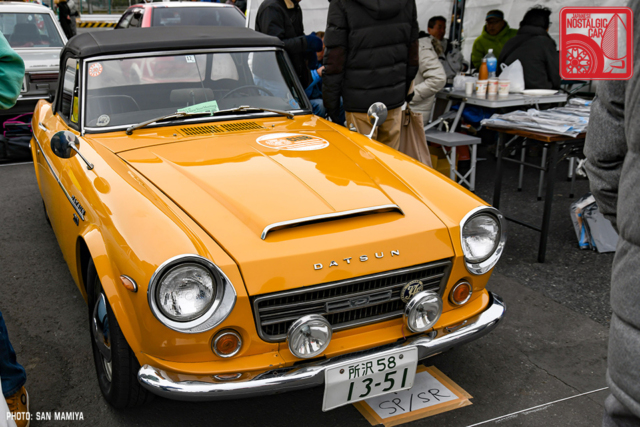 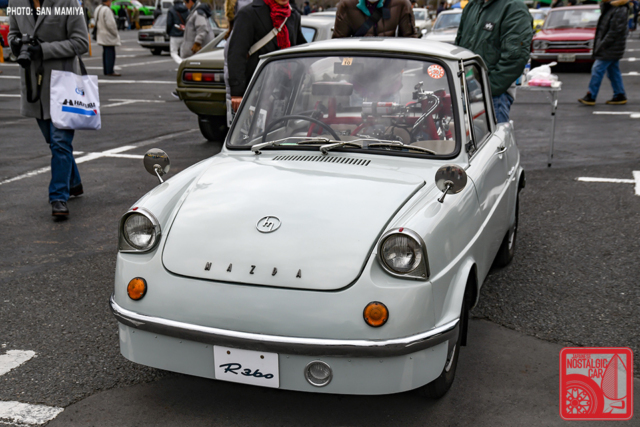 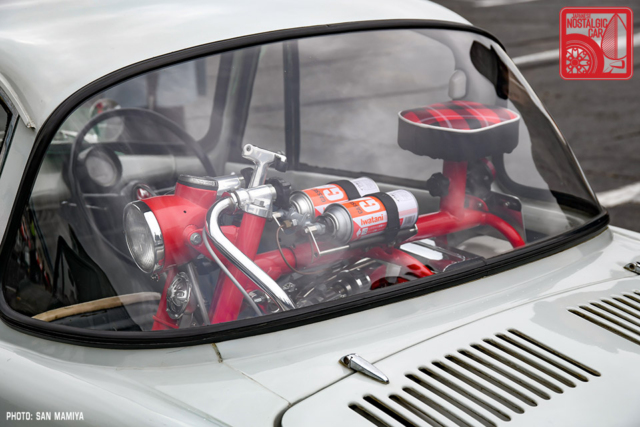 A 1965 Mazda R360 Coupe with a custom front lip had a surprise in the back, a Honda Monkey bike modified to run with butane gas cylinders from a portable stove. How they got the bike in there is a mystery to us. 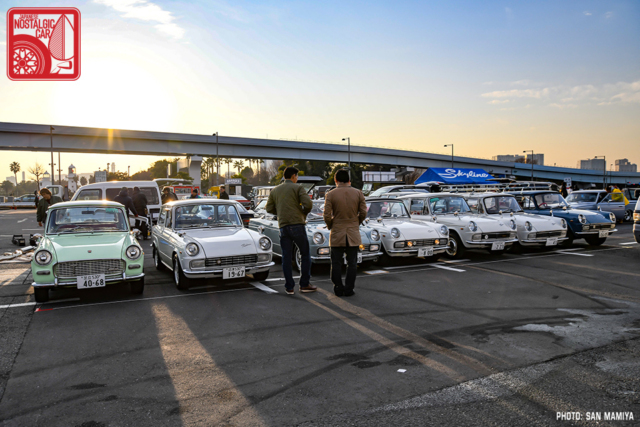 Of note was a pale green coupe, a rarity equipped with an automatic Toyoglide transmission. 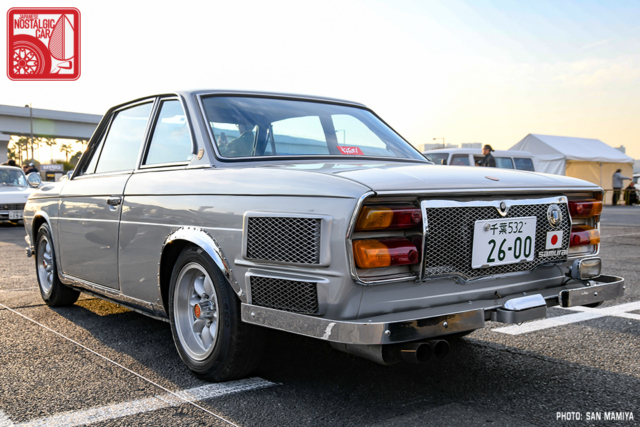 The 1968 Del Dandy Touring was a Hino Contessa 1300 Coupe L, a lightweight racing spec model, heavily modified by Shiozawa Shoko, a racing car constructor with a deep relationship to Hino. In its heyday, it ran a 2.6-liter V8 engine from a Toyota Crown Eight, but now it has been restored with a Contessa 1.3-liter OHV inline-4. 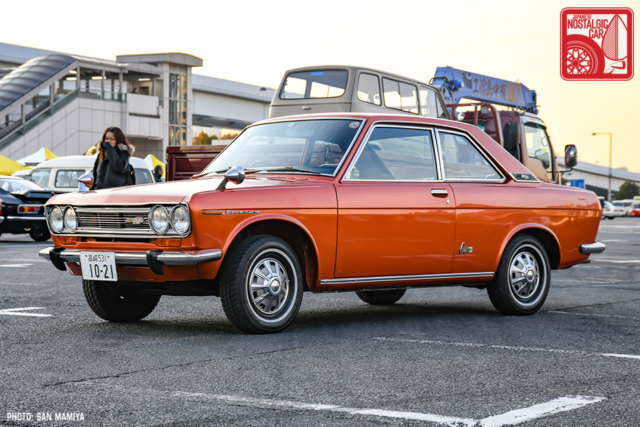 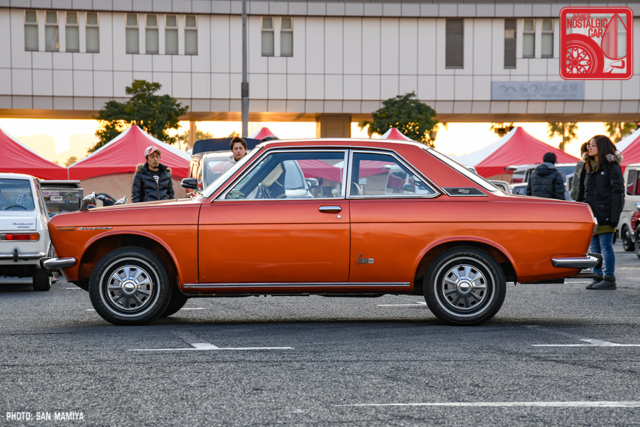 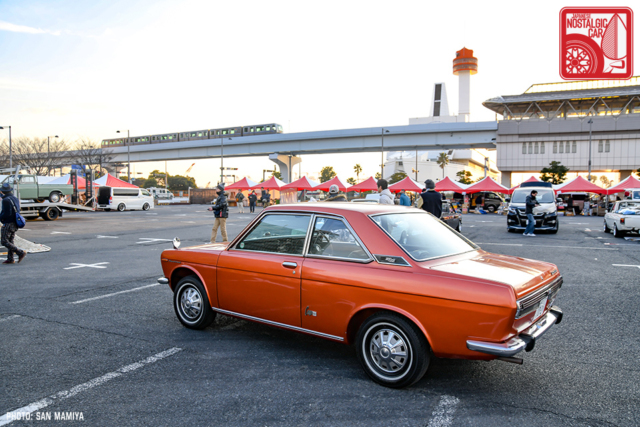 Last but not least was a beautiful, bone stock Nissan Bluebird SSS Coupe. Most surviving examples have been modified, but somehow this example, despite a perfectly eye-catching sunset orange paint, escaped the tuner’s wrench. 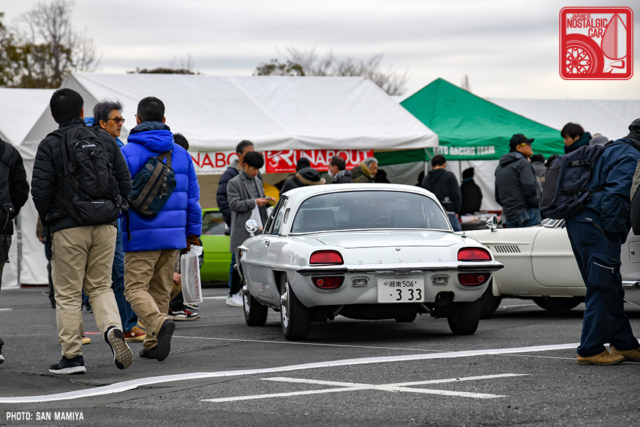 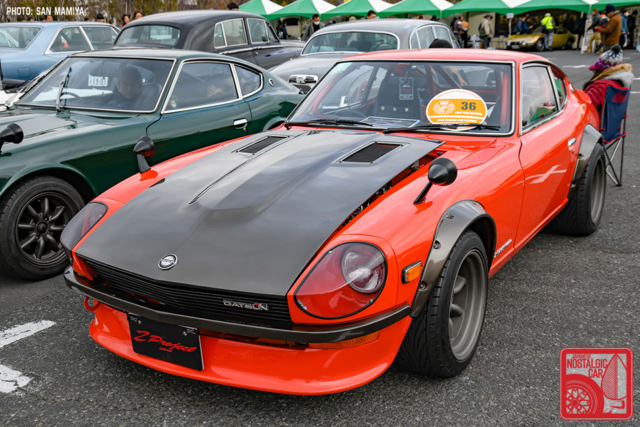 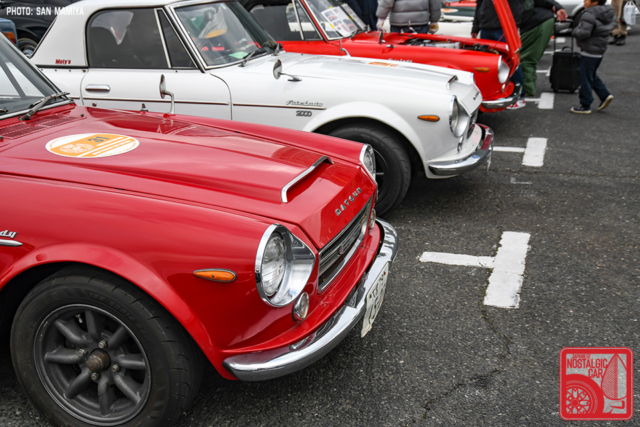 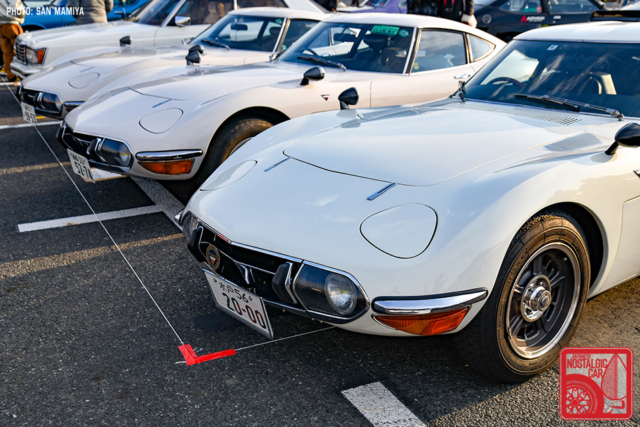 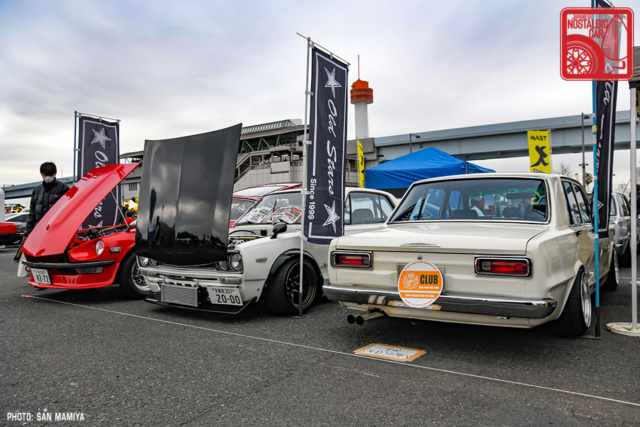 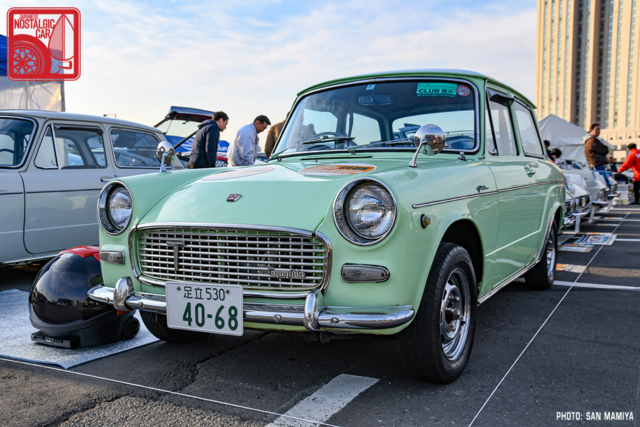