A car brochure collection of over 17,000 is used by Japanese police to investigate automotive crimes

Many of our readers have substantial car brochure collections, but none are likely to rival that of the Aichi Prefectural Police. Its Traffic Investigation Division has over 17,000 brochures covering nearly every make, model, year, and limited edition variant that can be found in Japan. The department uses them to identify cars involved in crimes, and has been building the collection for 40 years.

In a recent interview with The Asahi Shimbun, traffic forensics officer Misaki Hamaguchi detailed some of the department’s collection. The catalogs are stored in large ringed binders packed onto steel shelves along the walls of the division’s office. They date back to 1952, cover almost all cars operating in Japan, and have proven useful in tracking down suspects when the only evidence is grainy security camera footage, parts left at the scene, or witness descriptions.

Amazingly, the department doesn’t appear to have any direct line to manufacturers. Hamaguchi tells the paper, “If we find new car information in a magazine or online, we contact a dealer immediately.”

Even if a brochure is of the same model, Hamaguchi explains, there may be slight differences due to minor changes or the date of manufacture, so they always collect it. In Japan, carmakers often offer several special editions with minor cosmetic updates throughout a generation, far more than in the US. Catalogs are also updated more frequently than in the typical once-a-year cycle in the states.

The library includes specialty vehicles like ambulances and driving school cars, which are built by subsidiaries within manufacturers, such as Nissan’s Autech, or third parties. There’s even a pamphlet for a 1 of 1 global limited edition BMW 7 Series (so its owner better think twice before using it to commit a crime). 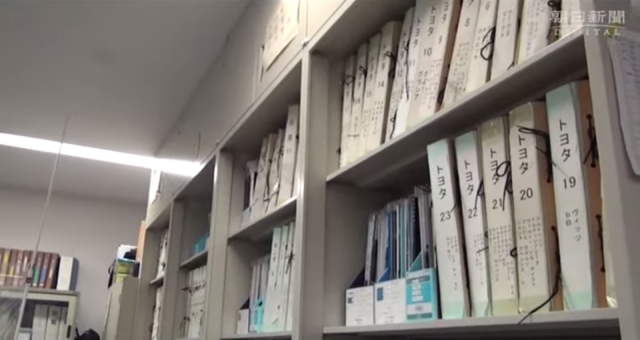 Though they describe it as a collection, the brochures are far from pristine. Most appear to have holes punched in them for the binders, and many older ones have had certain pages or photos cut out and pasted onto card stock for clarity and durability. The cutouts capture the front, back, left and right views of every car, with its size and performance specifications pasted on the card. Unique features like stripes and other identifiers are detailed in notes. Hamaguchi says that because optional equipment and accessories have grown so plentiful over the years, newer brochures are stored as-is without being cut out.

Ironically, Hamaguchi was never into cars before she started working in the Traffic Investigation Division three years ago, she tells the Asahi. Now, she finds herself constantly making mental notes about cars even when she’s on holiday with her family.

As the article points out, Aichi is one of the best car societies in Japan. It also happens to be the home of Toyota and many of its related businesses. Not only have many residents worked in the automotive sector, but their parents and grandparents have as well, so perhaps it’s no surprise that such an archive exists there. Hamaguchi says that her office has received requests from other police departments around Japan, and some have even been inspired to build their own collections.

Additional images can be found at The Asahi Shimbun photo gallery.

permalink.
This post is filed under: Collections and
tagged: catalogs, police.

4 Responses to A car brochure collection of over 17,000 is used by Japanese police to investigate automotive crimes